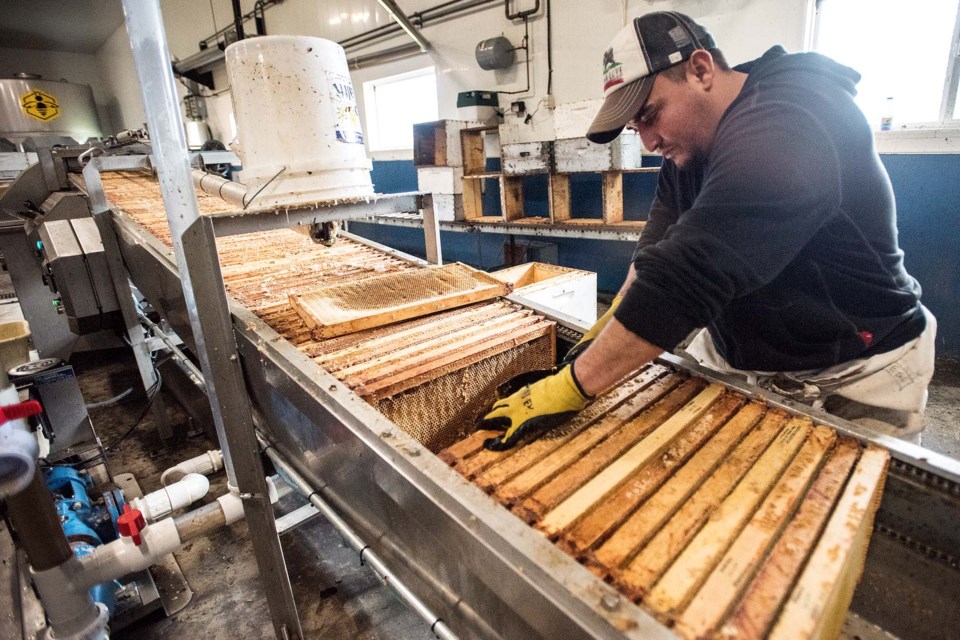 DELAYED EMPLOYMENT – Greidanus Apiaries employee Erick Gabriel of Nicaragua places racks of honeycomb from bee hives on a conveyor at the industrial-scale honey collecting facility near Legal in this 2018 photo. Farmers have struggled to bring foreign workers such as Gabriel into Canada this year because of the coronavirus. DAN RIEDLHUBER/St. Albert Gazette

Sturgeon County farmers will have to get innovative to get through this challenge of the coronavirus, says the county’s mayor.

Mayor Alanna Hnatiw hosted an online forum with about 25 county residents April 9 on how the COVID-19 pandemic has affected local farmers. It was the first in a series of forums on the subject.

“To say we are living in a time of uncertainty is certainly an understatement,” Hnatiw said, but these times of crisis can also present new opportunities to grow stronger together.

“It’s a test for us to get innovative.”

Hnatiw said she wants to hear how local producers are adapting to the coronavirus and how the county can support producers during these times.

Farmers reached by the Gazette said the impact of the virus so far really depends on what you farm.

If you’re a grain-grower like Walter Tappauf, not much has changed, apart from making sure your helpers don’t go out partying after work. Most workers on his farm spend their days alone on a tractor, so there's little risk of disease transmission.

“If it’s the same guy in the tractor every day, it’s not going to be the biggest deal,” he said.

Delton Jubinville, who raises organic beef north of St. Albert, said his operation hasn’t changed much due to the virus, although his sales have at least doubled in recent weeks, possibly due to panic-buying.

“People seem to want to stock up more,” he said, and he’s working with his butcher to make sure they’re ready to slaughter more animals.

Eric Chen of Peas on Earth said his sales are way down – not because there is less demand, but because farmers markets are only letting in 50 people at a time to comply with provincial health orders.

“We’re going to have to change the way we do business.”

Chen said he plans to either set up drop-off points or a delivery service this year to get more of his crops to customers. He is also concerned about finding helpers this spring, as he usually hires older workers who, due to their age, are more at risk of contracting the coronavirus.

Honey producer Paul Greidanus said farmers like him who hire temporary foreign workers are struggling due to the coronavirus’s restrictions on international travel. He and a bunch of other Alberta beekeepers had to charter a plane to get their crews in from Nicaragua since there weren’t any commercial flights flying – instead of the typical $1,200 per worker for a round trip, these flights will cost $2,000 a head one way. Regulatory delays also mean those workers are just starting to arrive now; usually, they’d have been on the ground in mid-March.

“On top of that, they have to do quarantine for two weeks,” he said, in accordance with provincial health rules on international travel.

Greidanus said he’s hired less-experienced local workers to prepare his hives for now. The long winter has pushed back the start of the spring rush, but has also meant more dead bees, and with international flights limited, it’s tough to fly in replacements from overseas.

During the April 9 forum, beef farmer and Coun. Karen Shaw said most cattle auctions have now moved online, which is a problem for many farmers who don’t have reliable Internet access.

“There are many areas where the local providers won’t even go into,” she said, as the topography snarls wireless signals.

Farmer Cathy Gilbert urged the county to lobby for a carbon tax exemption for grain-drying, which would be a significant cost to farmers this year not reflected in crop prices. She also suggested the county create a task force to promote local food and food producers in the wake of the cancellation of trade shows and farmers markets.

Hnatiw said the county might need to create a broadband speed map to address Internet issues and a volunteer list that farmers could tap should their usual workers become unavailable due to the coronavirus.

The county is holding additional online workshops on the pandemic for the value-added, horticultural and large commodity farm sectors on April 16, 20 and 23. Visit www.startinsturgeon.ca to register.