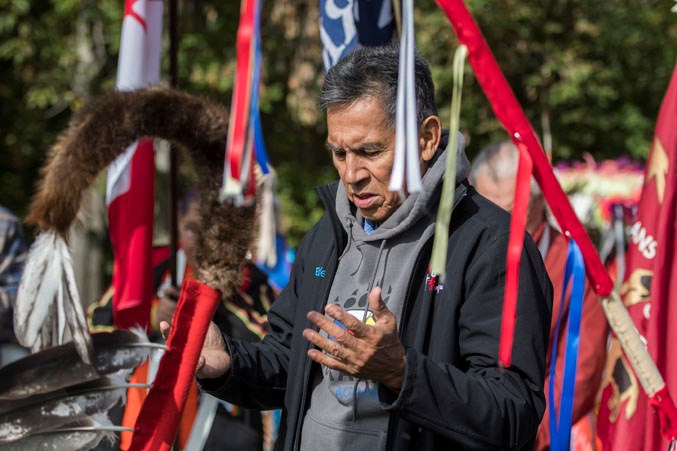 Francis Whiskeyjack gives a prayer after putting the eagle staff in place during the opening and celebration of the St Albert Healing Garden in St. Albert on Friday

The Creator sure has good timing.

Some 250 students and dignitaries gathered on the banks of the Sturgeon River across from St. Albert Place Friday morning for the opening of the St. Albert Healing Garden – a structure built to recognize the city’s residential school history.

A miserable fog had blanketed the region that day, one that dripped off people’s noses and sent spectral wisps over the river.

But at almost the exact moment Alexander elder Tony Arcand started the grand entry of dignitaries to open the garden, the fog lifted and the sun broke through the clouds. A few minutes after the elders, police officers, leaders and children had finished their celebratory round dance around the garden’s centre, the sky had become clear and blue.

“Thank you, Great One!” Arcand cried to the heavens.

“Thank you for giving us this beautiful day!”

Arcand was one of a number of local elders and residential school survivors who spent the last two years working to build the Healing Garden. Construction of the $324,000 project started in May and finished in August.

“This garden is for everybody,” said Hazel McKennitt, a residential school survivor and a member of the garden’s planning committee.

“Anybody that lives here in Canada is a part of residential school history,” she said – a history that has to be told.

“From here on, we will walk together. We will walk beside each other and we will help each other on this journey to our truth and reconciliation.”

The garden, which is officially named Kâkesimokamik (Cree for “healing garden”), is rich in symbolism and designed to be a place where earth, sky, water and air meet.

Its main path points south, and features a stylized river that connects it to the Sturgeon, said Kelly Jerrott, cultural services director with the City of St. Albert.

The path splits around a low grassy mound that will serve as a place for gatherings and talks, Jerrott said. Boulders stand to the east, west and south, representing those voices that cannot speak for themselves.

“The committee was very conscious of looking for a place that felt sheltered,” Jerrott said, so the whole garden is surrounded by trees.

North of the mound is the sensory garden, which is meant as a place to awaken the senses and connect with ancestors. There are red rocks that crunch beneath your feet, fragrant cedar and native plants, low benches, shade, and wind. You can hear the songs of passing birds, and check out messages like “Love” and “Hope” painted by small students on the garden’s stones.

Guests at the ceremony heard many accounts of residential school life from survivors.

Alexander resident Jerome Yellowdirt said his mother, Lottie Belcourt, spent nine years at the Poundmaker school. Students there feared punishment if they spoke their own language and were not allowed to leave, spending most of their days doing hard labour instead of getting an education.

Yellowdirt said his mother would have cried had she lived to see this day. A residential school survivor himself, he said this would become a place where anyone could pray and shed the negativity of the past.

“That’s where the healing is going to come from: through prayer and gratitude.”