Hundreds spoke this week in Edmonton about the Sixties Scoop: a notorious time in Alberta history that saw thousands of Indigenous kids ripped from their homes by social services.
Mar 3, 2018 12:10 AM By: Kevin Ma 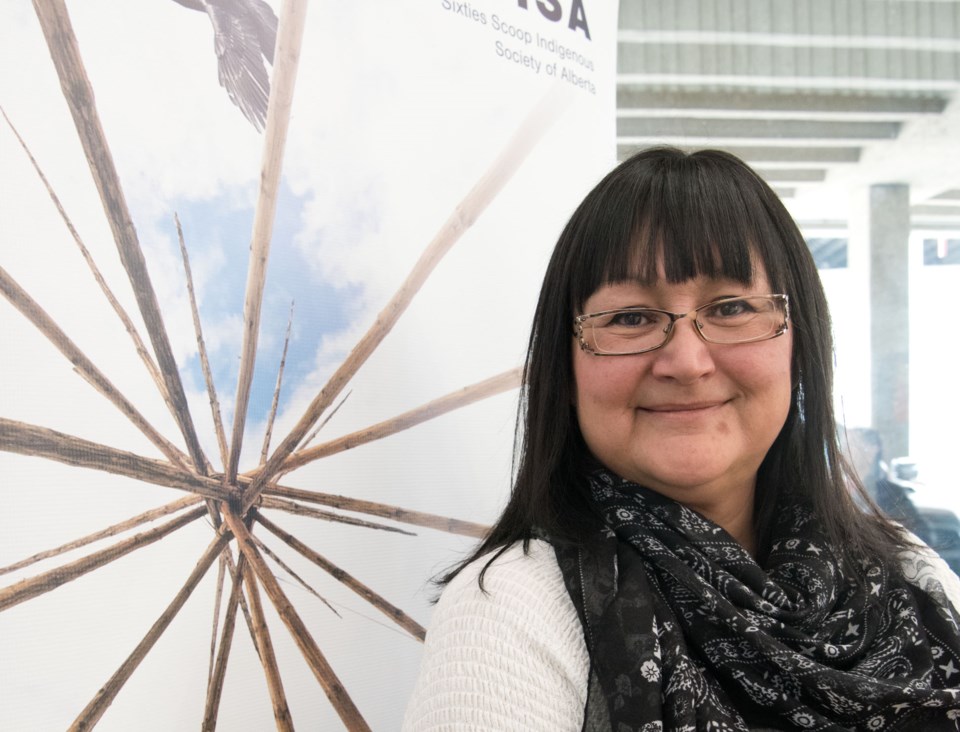 SURVIVOR — Former Alexander First Nations resident Sandra Relling was one of about 150 people at the Amiskwaciy Academy in Edmonton for a public forum on the Sixties Scoop. Relling said she was taken from her mother as an infant because of the Scoop, and would not meet her again until she was 21.

Sandra Relling didn’t know her mother when she was growing up.

Relling said her mother took her to the Charles Camsell Hospital in 1967 when she was eight months old for treatment, and was later told she was ready to come home.

“By the time (my mother) arranged transportation into Edmonton from Alexander to come pick me up, I had been apprehended and placed in a home.”

It would be some 21 years before Relling would see her mother again.

Originally from Alexander First Nation, Relling is one of the thousands of Canadians affected by the Sixties Scoop – a collection of provincial policies that caused scores of Indigenous children to be removed from their home communities and adopted by non-Indigenous parents across North America between the 1960s and the 1980s, resulting in the loss of their culture.

She was one of about 150 people at the Amiskwaciy Academy in Edmonton Thursday morning for the last of six public engagement sessions on the Sixties Scoop. The province and the Sixties Scoop Indigenous Society of Alberta ran the sessions to help craft a formal government apology for this historic wrong.

“Canadians need to understand the impact of the Sixties Scoop and what we had to endure,” Peigan said.

Visitors to the sessions used art and sharing circles to discuss how the Sixties Scoop changed them and what they wanted to see in the province’s apology.

Alberta Indigenous Relations Minister Richard Feehan said he has learned of the deep grief felt by survivors from the Scoop at these sessions.

Relling, who is the treasurer of the Sixties Scoop society, wiped tears from her eyes as she spoke about how survivors at these sessions told her of how they had been sexually abused or used as slave labour by their foster families. While she personally had a good life with her adoptive parents, she said she also grew up feeling that there was something missing inside her from not knowing about her culture.

Relling reunited with her mother around 1987.

“She’d never given up hope of seeing me again,” Relling said of her mother, who had deduced her adoptive family’s name based on the Alexander band membership list and called every “Relling” in the phone book.

There were a lot of hugs and tears at that first meeting, Relling said. She shared pictures from her childhood, and her mother showed her the one picture she had of her as a baby.

“I had never even seen any baby pictures of myself. Prior to that, it was like I didn’t exist before I was 15 months old.”

Peigan said the number of Indigenous children in care in Canada kept going up years after the Scoop ended, creating what some call the Millennium Scoop.

Indigenous children still account for almost half of Canada’s foster children despite making up just seven per cent of its kids, Statistics Canada reports. Just 29 per cent of Indigenous foster kids in Alberta are fostered to at least one Indigenous parent – the lowest rate in any Canadian province.

While the province has seen success in reducing the number of Indigenous children in care, Alberta Children’s Services Minister Danielle Larivee acknowledged that they were still strongly over-represented in the system.

“We have to do better, and we will do better.”

Feehan said the province would take what it heard at these sessions and work with Sixties Scoop survivors to craft an apology. The province has not set a date for it.

“It has to have meaning or there is no point to doing it,” he said.

Peigan said a meaningful apology would include a commitment to action, resources to help survivors come together to heal, and perhaps a memorial.

While some survivors have told her an apology would be meaningless, Relling said she would continue to work on it in order to effect reconciliation.