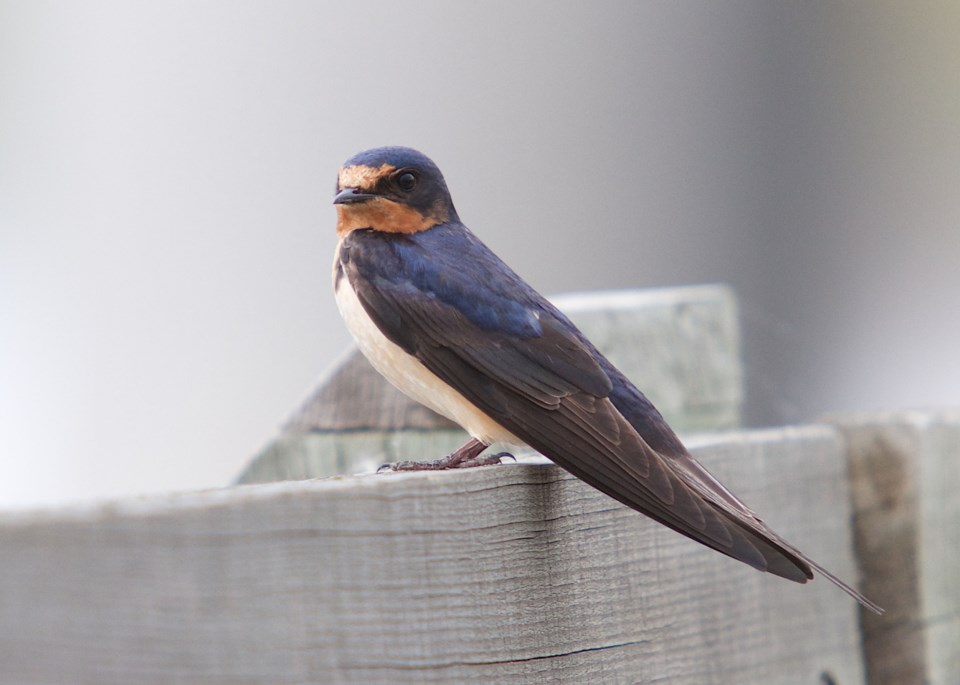 COMMON BUT THREATENED – A new report from the North American Bird Conservation Initiative shows that the number of common bug-eating birds such as the barn swallow in Canada has plummeted some 59 per cent since 1970. Habitat loss, falling insect numbers and climate change were all to blame.

Canada’s grassland birds have plummeted in number since the 1970s, suggests a new report, with almost two in three now gone.

The North American Bird Conservation Initiative in Canada released the second State of Canada’s Birds report last week. The report, a joint project of Environment Canada and numerous government and conservation organizations, looks at the status of Canada’s bird populations going back to 1970.

The study found that shorebirds, grassland birds, and aerial insectivores were in rapid decline across Canada, with numbers down 40, 57, and 59 per cent since 1970.

St. Albert birder Alan Hingston said he’s seen many of the declines shown in this report firsthand. Beaverhill Lake used to host thousands of shorebirds a year in the 1980s, for example, but that lake has shrunk to a fraction of its former size.

“Now I get excited if I see a hundred.”

The report found that aerial insectivores such as nightjars and barn swallows were in a steep decline that mirrored that of birds of prey back in the 1950s.

“We’re dealing with birds that people still see but people don’t realize they're in trouble,” said Jody Allair of Bird Studies Canada (which provided much of the research for this report). You still see barn swallows today, but whereas you used to see them by the dozens, now you see only a handful.

Part of this decline was due to habitat loss, Hingston said. Barn swallows like to live in old barns, and there aren’t many barns around any more. Insect populations were also way down, which the report flagged as a threat to insectivores.

“I never come back home from a drive now with a lot of insects on the windshield,” Hingston observed.

“They’re just not there.”

The trends for grassland birds such as the sage grouse and burrowing owl were also “quite scary,” Allair said, with birds dependent on native grasslands plummeting 87 per cent since 1970.

A major culprit here was agriculture, which has turned many of the native grasslands where bobolinks and eastern meadowlarks used to nest into farms, he continued. Habitat loss and global heating also appear to be the main reasons for poor trends in shorebirds, especially amongst long distance migrants.

We can bring them back

Birds reflect the state of our planet and provide important services such as pest control and recreational bird-watching, Allair said. If they’re in decline, that’s a warning sign of bigger environmental troubles ahead.

But the report shows that concerted effort can bring birds back. While many were once near extinction due to pesticides and habitat loss, international efforts to ban DDT and preserve wetlands have helped birds of prey and waterfowl numbers rise 110 and 150 per cent since the 1970s.

“All that investment has paid off,” Allair said.

“Now we get to enjoy northern pintails and shovelers all over, and that’s great.”

This is a multi-faceted problem that will require collective action to solve, Allair said. We’ll need to protect bird habitat, reduce carbon emissions (as they cause droughts, floods, storms and fires that threaten habitat), and take part in citizen science efforts like eBird to track bird populations.

“The report shows that if we do that, we can make a difference.”

The report is available at nabci.net/resources/state-of-canadas-birds-2019.