It’s hard to beat a sour cherry pie for a summer dessert. Bright red and juicy, an Evans Cherry pie is a thing to behold. To many, its tart flavour is superior to that of a pie cooked with sweet cherries.
Aug 16, 2014 12:00 AM By: St. Albert Gazette 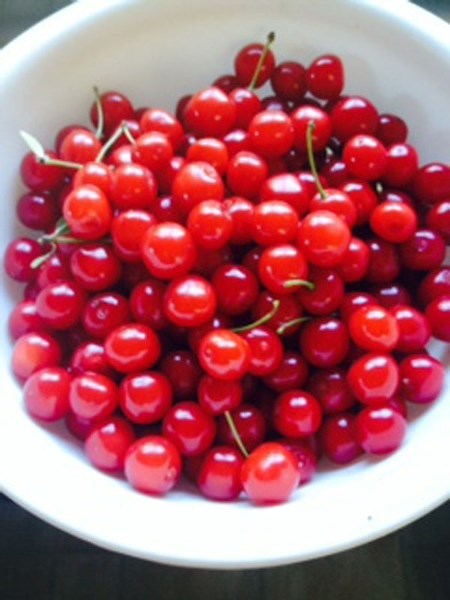 It’s hard to beat a sour cherry pie for a summer dessert. Bright red and juicy, an Evans Cherry pie is a thing to behold. To many, its tart flavour is superior to that of a pie cooked with sweet cherries. The fact that these cherries grow in almost every back yard here is due almost entirely to the work of provincial agriculture pathologist, Dr. Ieuan Evans, who was astounded by a tree he saw in a Sherwood Park back yard that bore so much fruit. He learned that the owner had obtained it from a Mrs. Bogward, an acreage owner near Horse Hills, between Fort Saskatchewan and Edmonton.

“I went there and I found the orchard was going to be bulldozed so they could build the federal penitentiary. So I took suckers from the trees and I cultivated them. Then I gave away hundreds of them to Alberta Agriculture people, to nurseries and to all the rugby players in town,” he said, adding that for a time when he lived in Millwoods, he had a hedge of 25 cherry trees.

“People came from miles around to see those cherries,” Evans said.

From there the cherries were propagated by Dr. Chris Pruski from Olds College, and he called the tree, ‘Evans Cherry.’

Still Dr. Evans was curious about where the unusual cherry tree was developed. Mrs. Bogward couldn’t really say where she obtained the original tree and it wasn’t until he travelled to Skagway, Alaska, that Evans figured the puzzle out.

“Cherries grow wild along the Alaska coast. In the 1920s, the American government gave away cherry trees to new settlers,” he said.

He now believes that the tree that bears his name originally came from Siberia. It likely came to Canada via a Canadian agricultural station at Haines Junction, on the Alaska/Yukon border.

“I think someone from Haines brought it to Oliver, where the old tree nursery was and Mrs. Bogward lived right near there so that’s probably how she got it. If I hadn’t rescued it from being bulldozed we wouldn’t have them here,” Evans said.

In the past few decades Evans Cherries have become extremely popular, not just because of the fruit, because of the everlasting nature and beauty of the trees.

Evans estimates there are probably five million Evans Cherry trees in Canada and a further two or three million in the United States.

“One tree that is eight years old will be eight or nine feet tall and about the same wide. And it will produce 450 lbs. of cherries, which is nine times the average amount of fruit produced by your average sour cherry tree,” Evans said.

Growing an Evans Cherry tree is easy, and it will live indefinitely because it suckers so readily.

“It will live forever because it suckers. You just take the sucker and grow a new tree,” he said.

Evans Cherries are fine in mid-August for pies or jelly, but the fruit sweetens more towards the end of summer. By then, the cherries will be better for eating straight off the tree.

Evans said he has tasted pickles, wine and champagnes as well as preserves of all sorts made from the fruit from the Evans Cherry tree but his personal favourite is Cherries Jubilee.

“I like the Evans Cherry Jubilee that the Hotel Macdonald makes,” he said.

But in our family, good old sour cherry pie is still the best. It doesn’t require flaming. It doesn’t need anything fancy at all, and a frozen pie crust is almost as good as home-made pastry, especially when you top a hot piece of pie with vanilla ice cream. To make, simply combine five cups of pitted cherries with 1.5 cups of sugar and two tablespoons of quick-cooking tapioca or cornstarch. Bake in a prepared pie crust at 350 F for about 45 minutes until the cherries are soft and the juice is bubbling.

If you are overwhelmed by 450 lbs. of fruit, leave some for the birds or make lots of pies, and freeze before baking. Cook from a frozen state for approximately 1.5 hours.