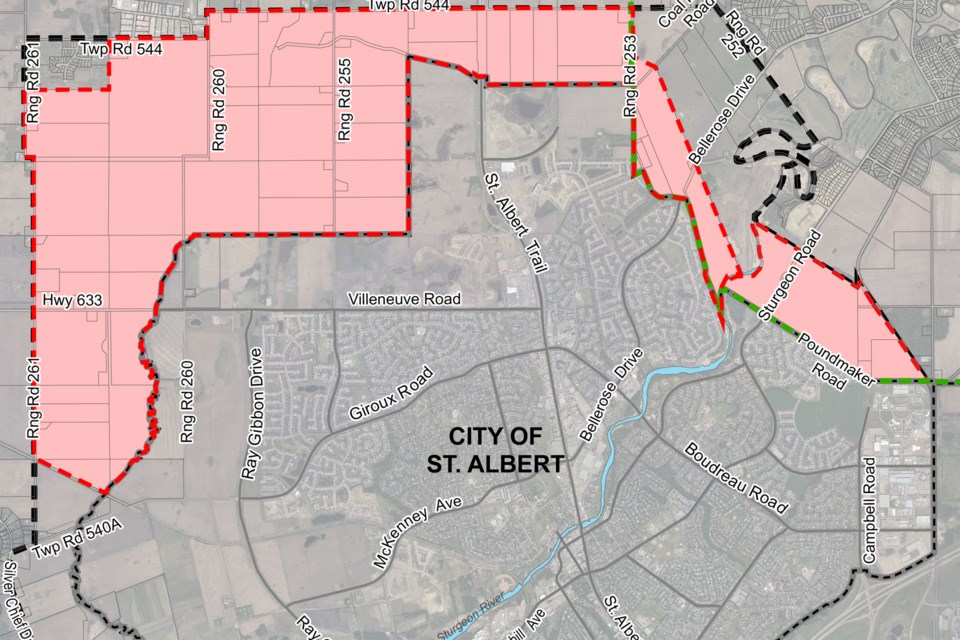 Proposed boundaries for St. Albert's annexation of Sturgeon County land. Fire chief Bernd Gretzinger told council on Thursday the need to increase fire services in the 2020 budget is influenced by annexation, which some councillors pointed out is not certain. CITY OF ST. ALBERT/map

In preparation of possibly expanding St. Albert’s boundaries north, city council will decide whether to purchase a nearly $800,000 fire tanker in 2020.

But, as Coun. Wes Brodhead pointed out, those negotiations over annexing land from Sturgeon County are still ongoing.

“What if we haven’t annexed this land? To me, when I read this, this entire purchase is predicated on a large annexation – what happens if that doesn’t go?” he said during budget deliberations Thursday evening.

City council had their first discussions on a proposed $109.7-million operating budget and $93.5-million capital budget on Thursday, which would involved a 2.4-per-cent property tax increase.

The fire tanker is included in St. Albert’s proposed 2020 capital budget, with a $779,000 price tag to be funded through debt. A fire tanker would enable St. Albert Fire Services to shuttle water to fires in areas without hydrants, like the land St. Albert is negotiating with the county on.

Currently, the city has one fire tanker, but the purchase of a second would allow continuous movement of water until future development brings fire hydrants to those annexed areas.

“That’s why the tanker unit is vital to this piece, if we’re going to consider going into that area,” he said. Later in the budget meeting, Gretzinger said without annexation at play, the tanker would not be “as big a piece of the puzzle.”

Last month, the annexation negotiating sub-committee – made up of St. Albert and Sturgeon County representatives – released a revised boundary for annexation, which cut out a significant swatch on the northeast maximum annexation boundary. The northwest area was left largely unchanged.

In the proposed 2020 budget, St. Albert is also considering borrowing $16.3 million next year to open a new fire hall on the city’s north side by 2023, and $1.54 million for a new fire engine to service the hall. However, these capital projects are needed to meet growing demand within St. Albert’s existing boundaries.

Coun. Natalie Joly asked whether compensation for St. Albert needing to expand its fire services is playing a part in annexation negotiations.

Finance director Diane McMordie said one of the “big components” of annexation negotiations is an impact analysis, which will take the whole impact of annexing land on capital and operating costs into consideration.

Homeowner costs are also a factor in the fire tanker purchase. Should St. Albert not purchase a fire tanker to service areas without fire hydrants, insurance rates would be higher than for areas that do have hydrants.

Gretzinger noted the building code would require different accommodations on homes as well, because it would take more time for water to hit buildings.

He said that means buildings facing each other would not be permitted to have windows on the facing side, and increased fire resistance ratings would be required, costing up to $5,000. Homeowners could also choose to install a sprinkler system.

Council has options when it comes to timing of expanding fire services with the addition of Fire Hall #4 and all the expenditures that come with that.

Upon a request by Coun. Ken MacKay, Gretzinger presented three possible contingencies for delaying construction of Fire Hall #4 for a year or two, and its hiring of staff. To staff Fire Hall #4, St. Albert is currently planning to hire 31 emergency services personnel (ESP) over the next three years. In 2020, that would cost $1.2 million.

Two possible alternatives council could choose is to keep the opening date of the fire hall the same but push back hiring in ESPs in the second year; or delay Fire Hall #4 by one year along with hiring of 20 ESPs.

“We wouldn’t be as prepared as we could be for any future potential lands until 2024,” Gretzinger said.

Council did not immediately make any motions for direction during their budget meeting and will hold their next budget deliberations Nov. 14.