Three teens treaded water for 20 minutes while another canoe towed them to the shore of Big Lake
May 27, 2020 9:00 AM By: Hannah Lawson 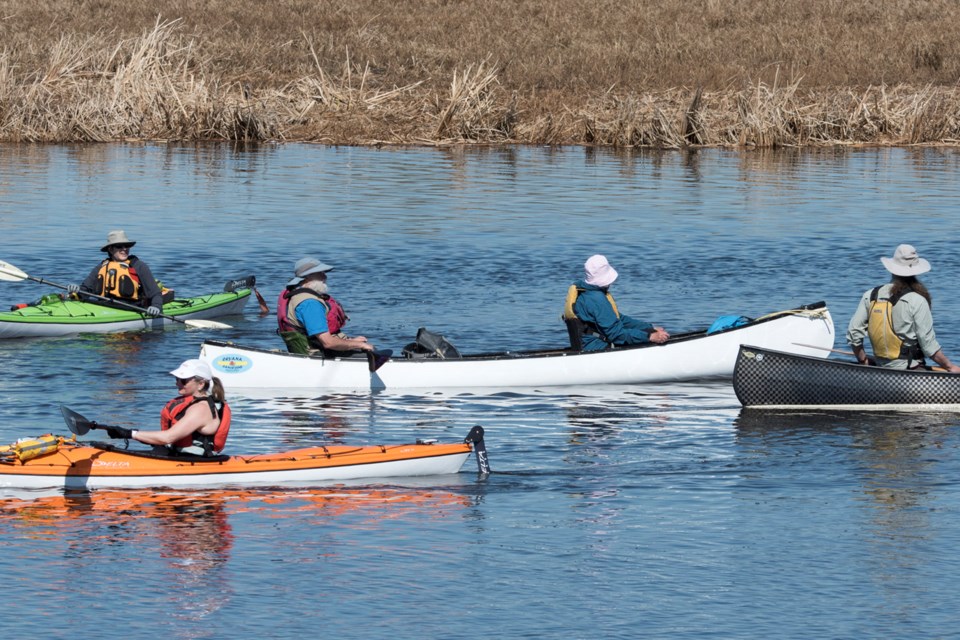 TRAFFIC JAM – Four boats cross paths near the BLESS viewing platform on the Sturgeon River on May 16, 2020. Hot summer weather made for a busy nautical afternoon that day, with at least eight boats on the water around Big Lake. With water sports picking up, safety measures – as shown here with boaters wearing life jackets – are important, as evidenced by a group of youths who capsized in Big Lake on the weekend. KEVIN MA/St. Albert Gazette

Canoeists pulled another boat to the shore of Big Lake while its teen occupants hung onto the sides Saturday after their canoe tipped over.

Multiple St. Albert Fire Services units responded to a call regarding the tipped canoe shortly after 1 p.m. May 23, in which no one was injured. It came only a week after a safety campaign by the department, reminding residents to always use safety equipment on the water.

Only one of the three occupants had a lifejacket on, but there were two lifejackets unused in the boat.

The teens, aged 15 to 16, spent 20 minutes in the cold water after their canoe capsized. While fire rescue was on the way, another canoeist pulled the capsized canoe to shore with the youths hanging on to the canoe.

Shortly before 1 p.m. on Saturday, the fire department received a call regarding a tipped canoe about 700 metres off the observation deck at Lois Hole Provincial Park.

“The wind had increased the waves on the lake this day,” wrote corporate communications director Cory Sinclair in the email. “Platoon chief, two engines, a rescue unit and a medic unit responded to the call.” There were one- to two-foot waves on the lake at the time.

Fire crews deployed a rapid deployment craft (RDC) with a five horsepower engine, and followed the tipped canoe, pulling it in to ensure there were no problems.

“Once they got close to shore the fire crews assisted the people out of the water and through the bush area and into the waiting ambulance,” Sinclair wrote.

City councillor Natalie Joly posted on Twitter the day of the incident that everyone should always wear a lifejacket or personal flotation device (PFD). She has been active in the white-water rafting community for over 20 years,

“Even if you're a good swimmer, it doesn't really matter,” she said. “The water right now is cold. I jumped into an Alberta Lake yesterday and it is not something that you want to be in for any length of time because it is so cold and your body just doesn't work as well when you're dealing with those kinds of temperatures.”

She added in her experience, adults are actually “far worse” than teens in making risky decisions regarding protective equipment.