The 2017 Pacifica has new features 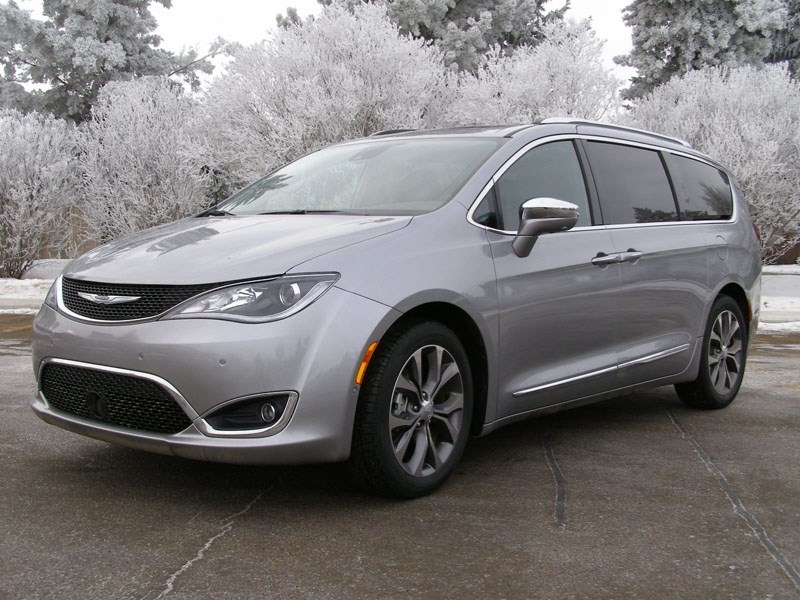 The 2017 Chrysler Pacifica Limited is a premiere mini-van for family travel.

Completely redone for 2017, the Pacifica is now Chrysler’s minivan. The Limited version at $51,000 plus represents the high end of the model line. The entry level Pacifica starts at $36,495. Whatever version of Pacifica a buyer chooses they won’t be disappointed as not only is this minivan capable of accommodating seven or eight passengers, it still offers all the benefits but with striking looks and an interior that’s upscale and comfy. Sculpted shapes abound, there are large buttons and Chrysler’s infotainment system remains intuitive, if a little more complicated than it needs to be. Stow ’n Go seating is a big plus combining the comfort of second-row captain’s chairs and the utility of a flat load floor without the burden of lifting seats out of the van.

The minivan is still the best vehicle for transporting a large family, say three plus children and perhaps a dog. If said family spends a lot of highway time going on summer road trips, this is the vehicle. You can get a complete audio-visual package giving touch screens in the front seat backs, a DVD player and headsets for passengers in the rear with USB connections and more.

At the moment in the marketplace potential buyers can choose from only a few mini-van models; the Pacifica, Toyota’s Sienna, Nissan Quest, Kia Sedona or the Honda Odyssey. The Sienna and Quest are fine but come off a little blah compared to the Pacifica and Odyssey. I think the Pacifica now surpasses the Odyssey Touring in terms of exterior and interior design. I’m willing to bet Honda designers and engineers have a Pacifica Limited on their hands and are working to raise their mini-van to the same level of excellence.

A hybrid version of the Pacifica hybrid is available but unfortunately there is no all-wheel-drive. The Pacifica impressed me on many levels; performance with the 3.5 litre V6 is strong as well as smooth. With 287 horsepower and 262 lb-ft of torque the engine has no problem getting the mini-van up to speed. The nine-speed automatic transmission works so smoothly you can hardly tell when it shifts. Fuel consumption around town was 12.5L/100km. That’s very good considering the size of engine and the cold weather. Ride and handling is car-like with little body roll when you push through a tight curve. I like the hidden door tracks and tasteful interior with the Stow ’n Go seats, which can fold flat or tilt forward with a child seat intact. A lighter body for this generation of mini-van allowed Chrysler to add more equipment such as a built-in vacuum for when somebody spills Cheerios all over the floor.

Circumstances resulted in no extended highway driving for the Pacifica save for some time on the Henday. On the road interior noise was hushed and the overall driving experience is not unlike an SUV. Everything was well put together and the quality of interior materials and trim more than acceptable. The variety of models allows for a Pacifica model that’s right for any family’s budget. While $62,000 for my top of the line Limited test model seems like a lot of money to spend for family transportation, it’s not really in today’s dollars. There are options galore including a tow package and the entertainment goodies I mentioned earlier.

Consider our family purchased a loaded 1997 Windstar, which stickered at $31,000.That was considered steep back then, but again the Windstar was loaded. Thankfully the dealer chopped the price by a big chunk, as it was the end of the model year.

Chrysler’s mini-van was groundbreaking when it premiered back in 1984. It certainly was the right transportation at the right time when boomers were growing their families. Tastes have changed, but it’s still the best choice in my opinion for family hauling.