Arden Theatre returns live with a tale of murder and comedy
Oct 10, 2020 8:00 AM By: Anna Borowiecki 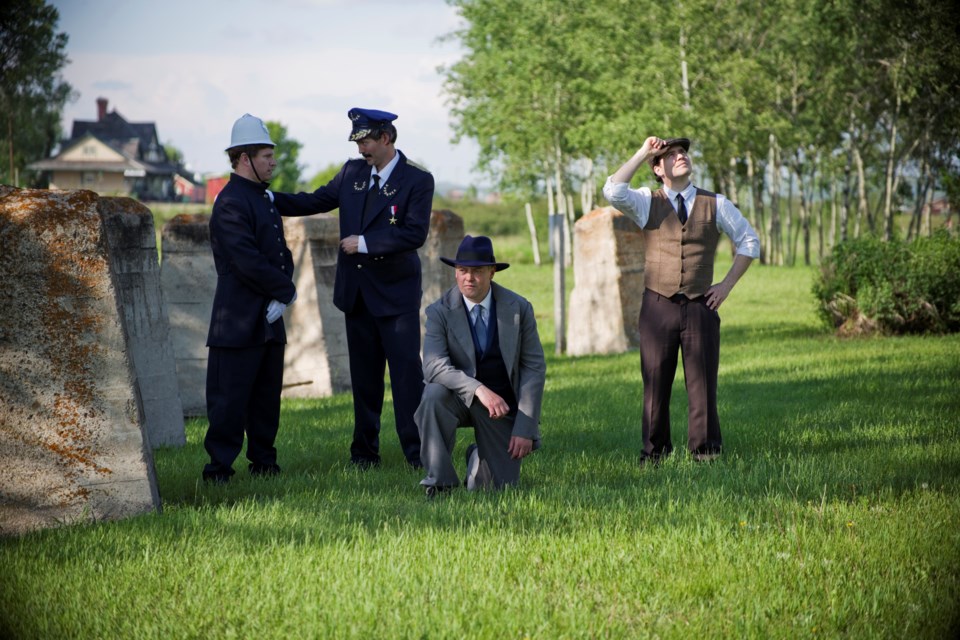 Turn-of-the-century Edmonton police are in hot pursuit of a man who murdered one of their own in The Flying Detective. Running live at Arden Theatre on Friday, Nov. 6, it features, left to right: Neil LeGrandeur, Cliff Kelly, Cody Porter and Willie Banfield. ANDREW SUDERMAN/Photo

Crime fascinates – mysteries set in motion, secrets revealed and the thrill of the chase. Any big fan of crime fiction is familiar with literary detectives of superior intellect such as Sherlock Holmes and Hercule Poirot.

Then there’s the more streetwise Sam Spade, Philip Marlowe, Harry Bosch and Lucas Davenport. They are a breed unto themselves on a mission to avenge the victim.

Alberta, too, has its own avenging angel. Detective James Campbell is pushed into the action-packed chase of a career criminal who murders an officer of the law.

The idiosyncratic Campbell was first introduced to crime fans at the 2019 Edmonton Fringe Festival through the production of The Flying Detective. The Accidental Humour Co.’s 75-minute theatrical production was an instant hit, garnering five out of five stars from many reviewers including the Gazette.

Once more, The Flying Detective returns to the stage as the Arden Theatre’s first live production since the pandemic disruption. The one-day presentation is Friday, Nov. 6, with the option for a second showing if there is a huge demand.

“I first saw it as a showcase when it was being workshopped at a conference I attended. I was really enamoured with it. I could see the vision of what they could do, and it’s a piece of Alberta history not too many people know,” said the Arden’s professional programming presenter, Caitlin North.

Stepping back to 1919, this multimedia theatrical piece turns a true-to-life, botched domestic theft into a murder case. Constable William Nixon, an on-duty police officer patrolling the night shift at Fort Edmonton Park, is in the wrong place at the wrong time.

He stumbles upon a robbery. In trying to prevent it, Nixon is shot by career criminal John Larson. Campbell, a crusty boiler-plate investigator with a Scottish burr, is handed the beefy assignment and vows to hunt his prey and put him behind bars.

The sleuth has one disadvantage: Larson raced out of town and has a three-day start to Edson, where he plans to disappear.

Enter the barn-storming Wop May, the famous First World War flying ace turned local bush pilot. He suggests flying Campbell to Edson, thereby cutting the chase time down to three hours. This historic flight was Canada’s first using an airplane in a manhunt.

Edmonton’s Accidental Humour Co.’s previous works – The Spark, the McCrackin series, A Cowboy Story and For the Love of a Zombie – were always coated with a delightful cartoonish patina.

“We all felt strongly we didn’t want to make a cartoon. Our previous shows were slapstick and lampoonish. This was a different story and we wanted to treat it with respect,” said founding member Brent Felzien, writer and video designer.

One of this satire’s cleverest ploys is watching a cast of four assemble a life-size airplane complete with wings and propeller on stage followed by a multimedia flight to Edson.

But at the heart of this stirring yarn is the relationship between Campbell and Wop May. It bonds all the different elements together.

“Back then, Wop May just flew the detective in and out. We gave May a larger role. He’s a young adventurer, a rabble-rouser, a forward-thinking man. Campbell is a button-down by-the-book from a different generation. It’s a buddy cop show,” Felzien said.

North goes on to say, “It’s very smart theatre. I really enjoyed it and they deserve all the accolades they get.”

Following protocols for pandemic controls, only 100 general admission tickets will be sold for the Nov. 6 show starting at 7:30 p.m. They are $36 and are available by calling the Arden box office at 780-459-1542 or online at ardentheatre.com.