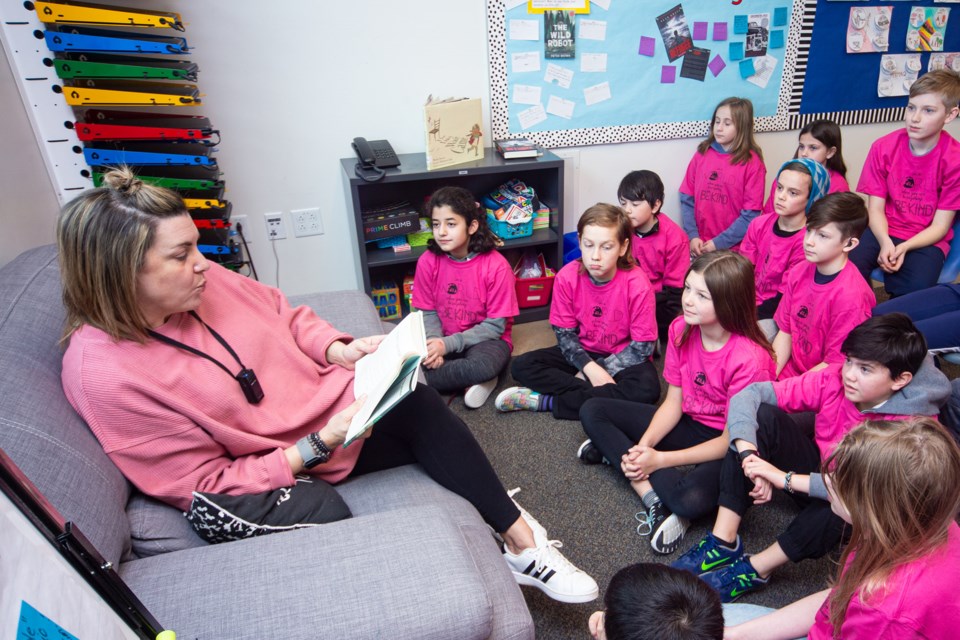 Lois Hole Gr. 5 and 6 students will be joining their Gr. 1 partners to either build robots as part of pink shirt day or read a book called The Wild Robot (being read here by Gr. 5/6 teacher Joanna Ritchie). The program aims to have the students interact this way to build community and fight bullying. CHRIS COLBOURNE/St. Albert Gazette

The more you know about those around you, the less likely you are to be a bully.

That’s why St. Albert schools are celebrating diversity this week as part of Pink Shirt Day – a national event meant to raise awareness about bullying.

Pink Shirt Day started in 2007 when two Nova Scotia students rallied their school to wear pink to support a student who had been bullied for wearing a pink shirt. That act sparked a global movement that encourages people to wear pink on Feb. 26 to take a symbolic stand against bullying.

Pink Shirt Day will be part of a weeklong celebration of kindness and diversity at Joseph M. Demko School this year, said principal Les Kirchner. In addition to wearing pink shirts, students will be challenged to perform specific acts of kindness that they will write up on paper stars to post in the school’s lobby. They’ll also mark their countries of origin on a big map, watch videos on kindness, and on Pink Shirt Day hear students Esosa and Oyemen Agbonison and Edmonton-City Centre MLA David Shepherd speak on Black History Month.

“The whole week is about accepting people for who they are,” Kirchner said, regardless of their looks or history.

“It’s alright to be different.”

Lois E. Hole students have been leading up to Pink Shirt Day in the last month by reading the book The Wild Robot, which is a story of how a robot learns to be friends with other animals on a mysterious island, said school counsellor Michelle Sutton. After all students gather for a Friend Breakfast on Feb. 26, students of different grades will get together to read passages from The Wild Robot and to build robots of their own.

The whole idea here is to have students build connections with each other and their community, Sutton said.

“The more you know each other’s story, the more tolerant you are of the people around you.”

The power of connections

The Red Cross defines bullying as mean, cruel, hurtful, and typically repeated behaviour perpetuated by one person who is in a position of power over another, whether that power be through strength, age, money, social status, or otherwise. It can be physical, social, verbal, or online, and can be similar to harassment, which is hurtful behaviour motivated by age, race, ethnicity, sexual orientation, or other traits outlined under Canada’s human rights laws. Bullying can cause serious emotional problems such as anxiety and depression in addition to physical harm.

It’s important to distinguish between bullying and conflict, Sutton said. Students can have conflicts and disagreements, and you can work those out by talking to both parties and reaching a compromise. With bullying, you want to address that power imbalance first – you teach the bully that there are consequences to their actions, and teach the victim to stand up for themselves.

The Red Cross advises victims of bullying to report it to a trusted adult. Witnesses to it should speak out against it, while perpetuators of it should speak with allies on how to form healthier relationships with others.

Bullying prevention is a year-round effort, Sutton said. By having students from different grades read and work together and recruiting playground leaders to model good behaviour, school staff can help students see themselves as part of a common community.

“If we really build a community around these kids and really work on how we are more the same than we are different, we typically have very few incidents of actual bullying,” Sutton said.

Visit www.pinkshirtday.ca for more on bullying.