The gala that gives

The Red Shoe Gala is a party above all else, but it's a party with a purpose... a very important purpose. Without it, through St. Albert Stop Abuse in Families (SAIF) would be scrambling to make sense of the chaos of abuse and violence in their lives.
Nov 1, 2019 9:15 AM By: Scott Hayes 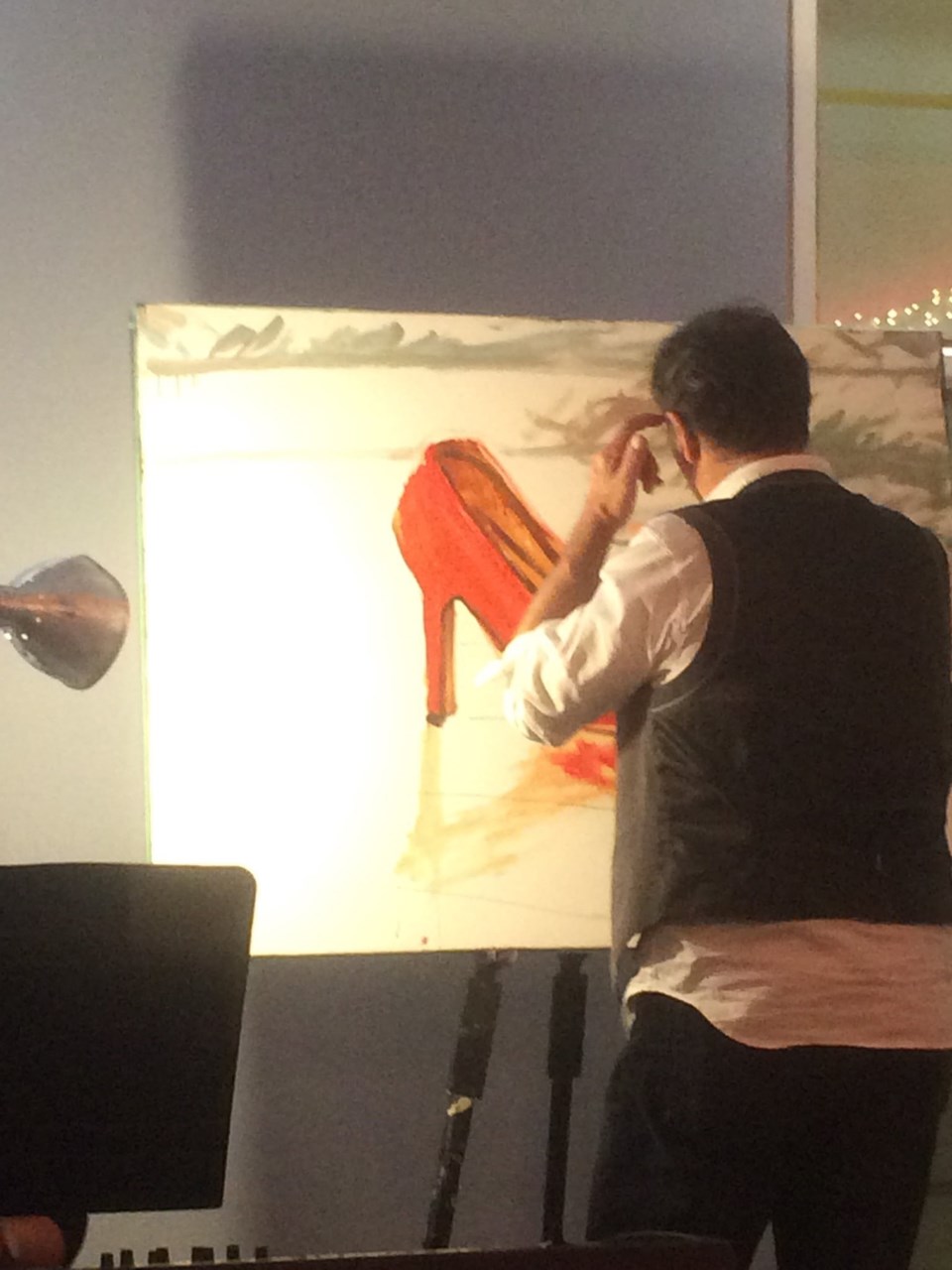 Painter/entertainer Lewis Lavoie will be one of the featured acts during the upcoming Red Shoe Gala. The artist paints in front of the watching and admiring crowds with the freshly painted piece auctioned off that same night. SAIF/Photo

Cocktails at 6 p.m. and three-course dinner at 7 p.m. with program to follow including keynote speaker Ken Franczek sharing his inspirational story of overcoming domestic violence when he was young.

The event will also feature Rob Lelacheur as emcee and Nolan Crouse as auctioneer, with Lewis Lavoie doing a live painting performance and award-winning country music artist, Hailey Benedict will offer the musical entertainment for the evening.

There will also be games and a silent auction, all to raise money for SAIF's counselling programs to help heal and break the cycles of abuse in our local community.

Tickets are $125 each and can be purchased online at stopabuse.ca/red-shoe-gala

The Red Shoe Gala is a party above all else, but it's a party with a purpose – a very important purpose. Without it, St. Albert Stop Abuse in Families (SAIF) would be scrambling to help people make sense of the chaos of abuse and violence in their lives.

Any time that you buy a ticket to the Red Shoe Gala, you know that you’re doing good work for the community: really good work. You’re helping an organization that helps hundreds of people stop the vicious circle of anguish with their relationship partners and other family members. You’re also helping people to confront their own psychological, emotional and behavioural issues that cause them to act out with abuse and violence in the first place.

That’s all serious work and seriously important work, too. The Red Shoe Gala, on the other hand, is a fun and highly entertaining way to support that work. Amid all of the fast-talking auctioneering by former mayor Nolan Crouse and entertainment by singer Hailey Benedict and live painter Lewis Lavoie, Ken Franczek will share his personal story of overcoming childhood domestic abuse and homelessness to become the general manager of Crystal Glass Canada and a widely respected public speaker.

“We always have one story from somebody and then it's dancing and the entertainment,” offered Areni Kelleppan, SAIF’s executive director, with a brief note about the unofficial dress code and the very official theme of the event.

“Everybody is welcome to wear red shoes but no, we don't provide them any more. Part of that was reflecting on what it was becoming: there was the first aspect of being ‘in her shoes.’ It started with us getting a sense of that gender-based violence but SAIF is much more than that: we help all genders.”

Domestic violence has long been recognized as an issue that affects all socioeconomic groups but is still primarily committed by males against females. Because of that, there is still the misconception that this is always the case; however, there is a growing recognition that sometimes it’s the other way around.

“It's about being in everybody's shoes and understanding if you have been abused – suffered or witnessed abuse – there's an impact there. Everybody is trying to overcome that impact and we can help with those impacts.”

She added many people don't know SAIF doesn’t only counsel those who have received abuse or experienced violence. It also counsels perpetrators of abuse: people who recognize their issues and want to work on self-regulation or anger management.

“We will help them with that because our mandate is to prevent abuse from happening. We want to see a society that's free of abuse.”

That valuable work could not be done without SAIF’s funding. The organization offers its services for free off of its $500,000 annual operating budget. It receives slightly more than 25 per cent of that figure from the city of St. Albert itself. Many people don’t realize it doesn’t receive any program funding from the provincial government.

“We depend very much on the community. Sturgeon County is also a big funder of ours – about 12 per cent of our funding.”

There’s another 28 per cent that comes from local donors mostly from the St. Albert and Sturgeon County areas. SAIF relies on the Red Shoe Gala to top up the rest.

It’s this fundraising that primarily goes toward its adult counselling program, which costs SAIF $200,000 a year. It is supported solely by private donation, including the proceeds from the gala, which generally brings in around $50,000, leaving a significant shortfall still.

“The Red Shoe Gala is incredibly important to our adult counselling program, because that is not funded at all. That is truly through donors and charitable partners. That's all it is. When we can get funding for that, that's fantastic.”

Obviously, SAIF relies on the generosity of its best friends and it seems like there are many people and other community groups that count themselves among that group.

“Those are donors … who make that possible for us, and charity partners like the Fraternal Order of Eagles and the Kinsmen and the Cosmopolitan Club and the Canadian Progress Club, all of them raising funds for us. Autorama (put on by the St. Albert Cruisers) is a big one that raises funds for us. All of these little pieces that come together to support us is really the community.”

In addition to all of its extensive programming, SAIF is now looking ahead to pilot a new children’s counselling program. It hopes to raise $30,000 to undertake this effort starting in 2020.