The near perfect sedan? 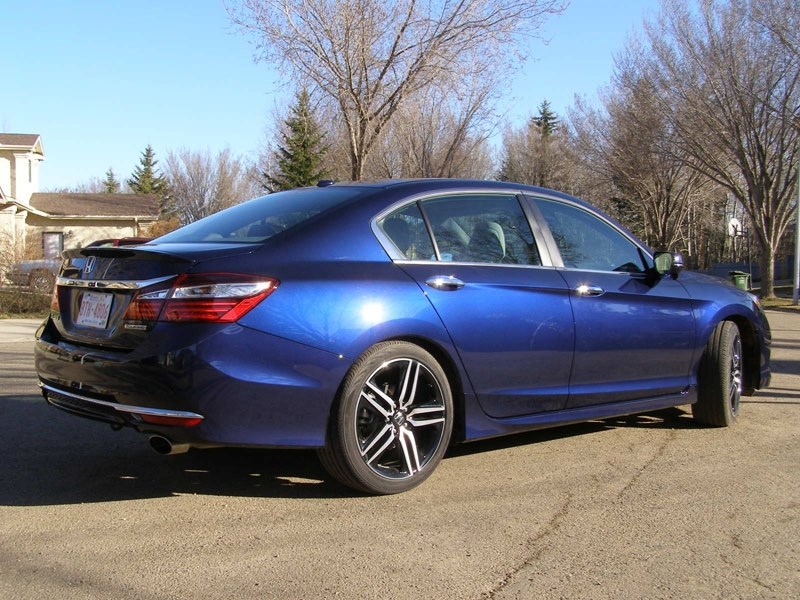 The latest Honda Accord boasts a stylish exterior

The Accord has achieved considerable success, especially in North America, where it was the best-selling Japanese car for 15 years (1982-97) in the U.S., topping its class in sales in 1991 and 2001, with around 10 million vehicles sold. Numerous road tests, past and present, rate the Accord as one of the world's most reliable vehicles. The Accord has been on the Car and Driver magazine 10 Best List a record 30 times.

Since its debut back in 1976 Honda has offered several different body styles and versions of the Accord. By the model’s sixth generation in the 1990s, it evolved into an intermediate vehicle with one basic platform but with different bodies and proportions to increase its competitiveness against rivals in different international markets. The current ninth generation Accord for the North America market is classified as a mid-size car.

A basic Accord sedan starts at $24,350. Honda supplied me with the almost top-of-the-line Touring sedan which was well optioned starting at $32,990. While all Accord models in the past offered comfort, reliability and economy which was a given, styling didn’t always turn many people on. This latest Accord hits all the right notes with me including styling. Just like the Civic Touring sedan I enjoyed earlier in the spring, the Accord looks really good now. Perhaps more so as the Touring model.

The Accord is available with two engine options; the 2.4 litre, DOHC four cylinder in my Touring sedan rated at 185 horsepower, 93 less than the V6. The four cylinder though is more than adequate to propel this fine sedan to highway speed. On two lane highways putting the foot down got the r.p.m.s rising pronto so I could easily pass slow moving vehicles. Never did it seem like the four cylinder was underpowered. I’d pass on the V6 and I’d suggest a potential Accord buyer take time to try both engines and discover as I did, that the straight four is smooth, powerful, fuel efficient and a good match with the CVT transmission. A six-speed manual transmission is standard if you prefer to row your own gears. The 3.5-litre V6 puts out 278 horsepower and both the V6 and the four use regular fuel which will save you some money in the long run. On the highway my Accord was able to get 6.4L/100 km and once back in the city fuel consumption went up to 9.0L/100km.

I had the Accord in early spring and needed to drive out to St. Paul for an appraisal on a restored 4x4. I worked in radio out there many, many years ago and decided to use some highway shortcuts that were popular with me back in the day. The curves and varied road surfaces were a good test for the Accord suspension and quickly told me the Touring model was an excellent road car for quick travel.

The ride had the right balance of tautness for tight curves without sacrificing quiet and smoothness. The comfortable and supportive seats did their part to keep me in place while making my butt happy for the time I was behind the wheel. The seat heaters warm up quickly. The back seat is roomy even for adults. The instrument panel is well thought out, with everything easy to read. The sound system is also worth a couple of thumbs up from me. The almost two-hour drive had me playing a couple of CDs at a high volume. With no passengers it was a good way to test the audio system. For two people there is plenty of trunk space and the fold-down 60/40 rear seat backs allows you to cram even more stuff behind you.

With the Accord so well designed is it any wonder the car has been highly rated by motoring journalists and so popular with consumers? In fact, I know many people who are on their second or third Accord. So clearly Honda knows how to engineer a really good sedan. After a few decades in production this latest Accord comes very close to being perfect in every way. Just a real pleasure to drive, especially on the open road.