The new church on the block

Congratulations to the congregation are in order. The St. Albert Canadian Reformed Church finally has a building to call its own, after splitting off from an Edmonton congregation nearly 20 years ago and borrowing service space from the Red Willow Community Church ever since.
Feb 7, 2020 3:28 PM By: Scott Hayes 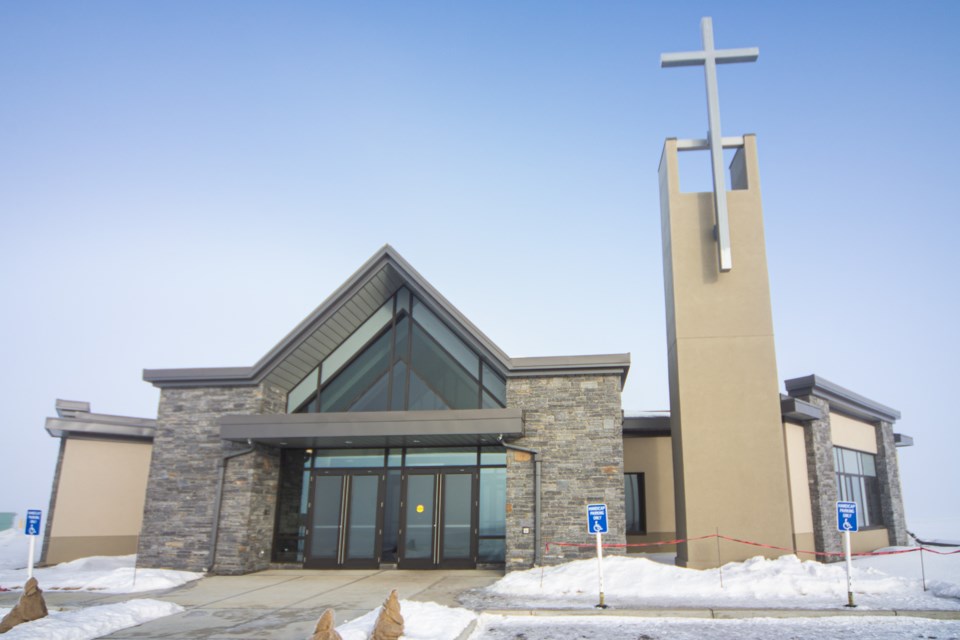 The St. Albert Canadian Reformed Church finally has its own home along Villeneuve Rd. near Ray Gibbon Dr. Construction of the new building was completed recently after years of the congregation borrowing space from Red Willow Community Church. CHRIS COLBOURNE/St. Albert Gazette

Their prayers have finally been answered. After having spent more than a decade and a half borrowing space for its Sunday services, the St. Albert Canadian Reformed Church now has a church building to call its own.

Rev. Ken Wieske was quick to thank the graciousness of the Red Willow Community Church for offering room to his substantial congregation of nearly 400 members for so long. It might have seemed like cramped quarters but they persevered.

The new church is now located at 54203 Range Rd 261 in Sturgeon County. It sits on a 15-acre lot located along Villeneuve Road, approximately 5.5 km west of St. Albert Trail. You can’t miss it, Wieske said, although they are still working on getting the signage up.

Australian-born Wieske is still in his first six months with this congregation, having spent the last 20 years with a church in Brazil. It’s an exciting time for him and for everyone, he suggested, especially with all of the doors that are being opened, literally and metaphorically speaking. Having a building of their own provides for a lot of possibilities to come true.

The church first established itself nearly 20 years ago when it sprouted off of the fertile roots that the Providence Canadian Reformed Church provided for it. Many of the congregation attending services and programs there in Edmonton’s Sherbrooke neighbourhood still lived in St. Albert at the time. It seemed like the right time to branch off on their own.

Doing so, however, meant the hard reality of facing the burdensome costs of construction and finding a suitable parcel of land for the church. In St. Albert, space is always at a premium. Thankfully, the fine folks at the Red Willow Community Church had room to spare.

In a fine stroke of irony, the new building for the St. Albert Canadian Reformed Church isn’t actually located in the city, but Wieske says his flock is still committed to the community it serves.

“They did want to be more in town. We're a little bit on the edge,” he said, suggesting the city’s future growth might bring the border closer to them. “What it comes down to, we actually had a property closer ... that was more in town, but space is tough. We're hoping that as the city grows, we can reconnect, and that it won’t be too long.”

Still, the flock put a lot of work and a lot of love into the project, especially with Ralph Smeding who spent more than a year running the construction. In turn, they received a special gift in the form of stained glass from the Knox Metropolitan United Church that was recently demolished from its longstanding home on Edmonton’s southside. Local artist Brenda Malkinson also contributed new stained glass works as well.

It’s not only a beautiful space but it’s well designed to lift the voices up.

“I’m a preacher, so it preaches well. The acoustics are great. The singing is awesome.”

The public is invited to the opening ceremony on Saturday, Feb. 8, starting at 1:30 p.m. Along with the ribbon cutting, Rev. Wieske will start the program that will include the church’s history plus a presentation on the highlights of the design and construction of the building, after which attendees can feel free to look around. Regular services commence on Sunday at 10 a.m. and 2:30 p.m. For more information, visit its website at stalbertcanrc.com.

The hope is to eventually save up enough money to add on to the main structure with a fellowship hall and a large kitchen. The good news is they now have the space to grow and do such things.