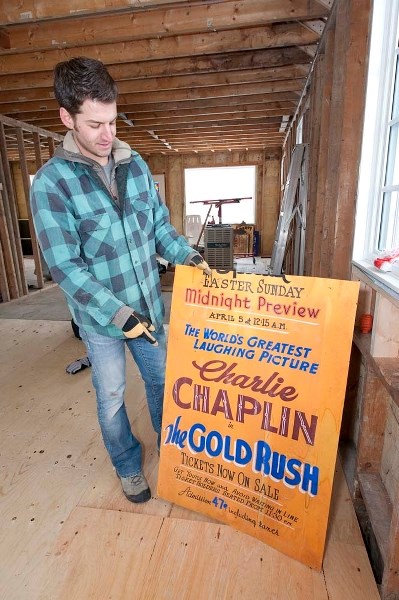 GREAT AD. BAD INSULATION – Energy efficiency expert Stuart Fix displays a 1940s-era movie poster he found in the walls of his Edmonton home during renovations. Homes from this period used what are now considered substandard materials such as this for air seals and insulation

The walls were full of wood chips backed by hand-painted movie posters and vintage Edmonton Journal printing plates. The embossed letters on those plates are still legible, recounting tales of the Dieppe Raid and urging readers to "Buy Victory Bonds."

Fix has stripped out all this old insulation and is replacing it with about six to 12 inches of Roxul – a form of spun rock that's super-good at trapping heat. He's also replacing the furnace and windows, adding in-floor heating, and making a host of other changes to cut the home's energy use.

"From the energy modelling I've done, we should be seeing an 80 per cent reduction in energy consumption," he says – equivalent to an ultra-efficient modern house.

And it will still have its historic roots – he plans to leave the print plates in the wall and likely frame the movie posters.

Fix, a former St. Albert resident, is a senior sustainability engineer with the City of Edmonton. He's one of a growing number of people who have decided to not only renovate their homes, but make them more energy efficient as well.

Homes are the biggest source of greenhouse gas emissions in St. Albert, accounting for about 40 per cent of all emissions, reports the city's office of the environment.

If we are to head off the worst of climate change, we need to make our homes use less energy.

Making the old new and green

Fix is about a year into his two-year project, so much of his work is still ahead of him.

Headed into the homestretch a few blocks away is Philip Mees, a semi-retired chemical engineer. He's been working on his 1947-era home for about 10 years now, and should be finished next year. It's taken awhile, he admits, but he's doing all the work himself.

So far he's roughly tripled the insulation value of the walls, roof and basement by adding Roxul and polystyrene panels to them. He's upgraded the windows, put in on-demand water heaters and added a programmable thermostat.

The home is so efficient now he's been able to shrink the size of his furnace by about 30 per cent, even though the house has doubled in size.

Half the house doesn't even have heating yet, yet it's not even a little cold inside despite the winter weather.

Like Fix, Mees says he decided to go the renovation route because it was cheaper than buying a new home or demolishing an old one.

A former EnerGuide home inspector, Mees also knew that he could reduce his costs and greenhouse gas emissions through a renovation.

Edmonton resident Anna Bubel had similar motives when she started her renovation back in 2008.

Bubel knew that most of Alberta's electricity comes from coal, one of the worst sources out there when it comes to greenhouse gas emissions. Concerned about climate change, she set out to reduce her carbon footprint as much as possible.

Five years later, after replacing her lights with LEDs, buying efficient appliances, hunting down energy vampires and installing six solar panels, she's managed to cut her electricity use in half. She now pays about $19 a month for power, compared to $33 before.

In fact, she's actually producing more power than she's using – power she can sell to the grid.

"I am a net exporter of energy with my six panels!" she says.

It's best to start your renovation by figuring out how you're using energy, Bubel says.

"It's super easy. You just pull out your bill, and on your bill, it'll show you."

Next, go after any rebates your community might offer.

"If CO2 is motivating you, I would go after electricity in a ruthless kind of way," Bubel says.

Bubel used a Watts-Up meter to find all the appliances in her home that used power when turned off, for example. (She got a $10 one at a hardware store.) She also reduced her consumption through use of a programmable thermostat and using a basement clothesline instead of a dryer.

Once you've done the basics like sealing leaky windows, it's time to start replacing and upgrading stuff.

Mees has upgraded his windows to triple-pane ones that trap more heat, for example, and replaced his hot water tank with an on-demand heater. Such heaters can be 35 per cent more efficient than a normal hot water tank, reports the Edmonton Green Home Guide.

Insulation is one of the easiest upgrades you can do and generally gets you the best bang for your buck, Fix says.

But since it can be messy to rip open your walls to re-insulate, Mees suggests replacing your furnace first, especially if you have a typical super-leaky 1980s-1990s home. The leakier your home, the faster the furnace will pay off.

There are costs to efficiency. Mees now has thicker walls, for example, meaning he has slightly less living space per property tax dollar.

"If you insulate well, you end up paying more property tax!" he jokes.

Some measures also have long paybacks.

And many residents have other priorities than energy use.

"Two thousand dollars I spend on a furnace upgrade is $2,000 I can't spend on a kitchen counter upgrade," Mees says.

"Not every homeowner is necessarily an energy efficiency expert," Stoyke says, and that can deter some from doing a retrofit. Even if you are an expert, it can be tough to find contractors who are up on the latest efficiency measures.

One solution is C Returns – a company Stoyke and Bubel formed in 2012. The company draws together experts and contractors from across the province to audit homes, calculate the best upgrades, and do them in bulk, saving money.

The company has so far audited about 120 homes and retrofitted about 12, Stoyke says. (They've also done a number of community halls.) It cost a net $7,220 extra to retrofit each home, but those homes will now save about $20,515 in energy bills each over the lifespan of the retrofits.

"One of the community halls actually cut their electricity bill in half at relatively low cost," he said.

That's money you get back when you sell the home, Fix notes. In the meantime, you get a more comfortable and cheaper-to-run home while doing your part to stop climate change.

"From my perspective, it's nothing but pluses."