The roots of our history 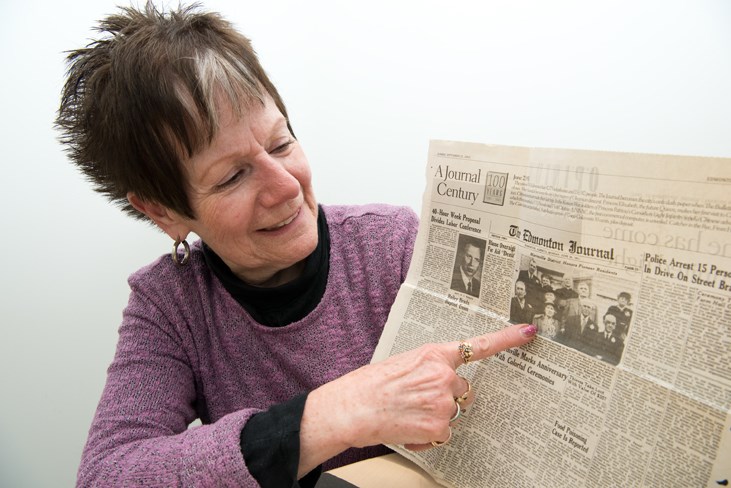 HI GRANDPA! — Carol Kaup examines an archival news story on her ancestor, Peter Hittinger. Michael Hittinger, Peter's father, would have first farmed on land just southwest of Morinville. The Hittinger district of Morinville is named after the family today.

The Gazette is digging into a different part of Sturgeon County’s history each month this year to commemorate the county’s centennial. Do you have a topic you want covered? Email [email protected] with your suggestions.

Back in 1897, David Crozier would have been up in the wee hours of the morning each day on his farm just west of what is now the Edmonton Garrison, crouched next to a cow and milking away.

His great-great grandson Jason still milks cows on that same farm today, but he doesn't even have to get out of bed to do it.

“The cows go in on their own to milk,” he said, as he looked over the 171 Holsteins in his high-tech energy-efficient barn, and they do so whenever they want. Once they’re in the milking bays, a robot arm scans their udders, cleans the teats, and milks them automatically.

“We don’t do it ourselves anymore.”

Sturgeon County’s roots are in its farms. Its first settlers were farmers, and many of their descendants still live and work on their ancestral lands today.

Whether or not they’d recognize farms today is another question, Jason noted.

“I don’t think they’d be able to believe it had changed this much over the years.”

Settlers started coming to what is now Sturgeon County after 1872 due to promotional efforts by the federal government, who wanted the west populated by Canadians before the Americans swooped in to take it, reports Black Robe’s Vision. Anyone over 21 could plunk down $10 and claim a quarter section of land provided they also built a home on it and improved and cultivated it within three years.

The promise of cheap land drew settlers from all over, said Donna Garrett of the Musée Morinville Museum. Many Morinville-area settlers were either French-speaking families recruited by Bishop Grandin and Father Morin or German immigrants from the U.S.

David Crozier was originally from Ontario but came to Sturgeon by way of Kansas, said Lenard Crozier, Jason’s father. David checked out this region after hearing about it from William Cust, a Sturgeon Valley farmer who, in 1875, became the first commercial wheat-grower in Alberta. David rented the Cutbank Farm from him, buying it outright in 1898. There followed many years of breaking land and clearing trees with the help of his sons John, Kenneth, and Lloyd.

Carol Kaup said her ancestor, Michael Hittinger, came to the county in 1891 by way of the Dakotas, having previously fought in the American Civil War.

“He actually spoke six languages,” she said, which came in handy when he met up with Father Morin’s troupe of francophone settlers on the way west from Manitoba.

Hittinger bought three quarter-sections of land southwest of where Morinville is today.

“It was very good land for farming,” Kaup noted, especially since the whole region had burned in a massive fire just two years before, leaving it extra fertile.

Farmers would have struggled just to survive in those early years, fishing, hunting, and living in sod houses, Garrett noted. Wolves, weather, and (during the North West Rebellion/Resistance) fear of First Nations militants were frequent concerns, A Cameo of the West said.

Farms in those days had to get water from wells or rivers, and wouldn’t have had furnaces or electric lights, Kaup said. The 1913 Hittinger home had dirt for insulation – they had to seal the cracks in the walls with feathers and a flour/water paste to keep dust from blowing everywhere.

Most farmers would have run mixed operations with cows, chickens, pigs, and horses, Lenard said. You’d clear a bit more land each year, using the wood to heat your home, and grow grain to feed your cattle.

While the first settlers would have had to drag logs and toss grain in the air to thresh their crops, farmers would have been able to use steam or horse-powered threshing machines by the early 1900s, Kaup said.

“In those days, the farmers would all help each other,” she added, as few people could afford such mechanisms.

When it came to dairy, farmers such as the Croziers would have milked their cows by hand twice a day, once at 6 a.m. and once at 6 p.m., Lenard said.

“Everything was manual labour,” he said, and many of those labourers worked for room and board.

That started to change in the 1940s, though, with the introduction of electricity and electric milking machines, Lenard said.

Farmers would have poured milk from pails into eight-gallon cans made of galvanized steel that weighed 20 pounds empty, placing them in a cold-water bath for refrigeration, Lenard continued. Once you filled 30 or 40 of them, they’d lift the now-100-pound cans onto the cart (or Model T truck by the early 1900s) and drive to the local milk processor – Edmonton’s Woodland Dairy in the Croziers’ case.

There, inspectors would lift the lid of each can, sniff it, do a taste test with a stick and spit the milk sample on the floor, Lenard said. If your milk was fresh, they took it – sometimes for cheese if it was a bit off. If it was sour, it went down the drain.

As the men worked in the barns and fields, the women were in the kitchen, cooking all day to prepare meals for the workers, said Kaup, who could recall watching her aunt at work.

“Her kitchen was going all the time,” she said.

“I can still see all the cups and the coffee."

The 1950s and 1960s brought many technological advances to farming.

Tractors were far more common in this era, said Kaup, who recalls the “pop-pop-pop” sound they made when they started up in the morning. (It was always fun to hear who got theirs started first, she added.) They didn’t all have covered cabs yet, so her dad would often bundle up in a buffalo-hide coat when driving one.

The 1950s also saw the popularization of the combine harvester, Lenard said. You could run it with just three people, instead of the 20 needed for a thresher, and it was mobile, so you could drive it to your grain instead of hauling grain to it. This saved farmers a lot of time and labour, and allowed them to grow more acres.

Many old dairy farmers have bad knees from having to squat down to milk cows all the time, Lenard said. As a solution, John Crozier (son of David) built one of Alberta’s first raised platform milking parlours in the 1950s, which elevated cows so farmers could milk them standing up.

The 1950s also saw the arrival of electric cooling systems and bulk milk tanks, which made water baths and heavy milk cans obsolete. John also helped popularize artificial insemination through the Edmonton Artificial Breeding co-op in this era, allowing his farm to go bull-free after 1954.

The 1960s saw more mechanization. Kaup remembered driving her dad’s self-propelled swather, for example (“I got the worst sunburn I’ve ever had in my life,” she said), and seeing grain augers and big grain trucks in action.

They had telephones and wringer washers, but no clothes dryers yet, which meant all your clothes had to dry on the line, even in the winter. Kaup recalled almost snapping the arms off of her dad’s frozen long-johns once when she tried to fit them through the door.

In 2012, the Croziers became one of the first Alberta dairies to switch to robot milking booths. The machines give the cows a tasty molasses treat, attach the nozzles, and pump the milk into a truck-sized 20,000 L tank for shipment, Jason said. The milking barn is also designed so that it’s heated entirely by the cows themselves.

Farming has change a lot since David Crozier’s time. While crop failure and wolves might have been the biggest threats to his bottom line, his descendants are more concerned about international trade agreements.

“Production is moving all around the world,” said Lenard, and today’s farmers have to compete with producers as far away as New Zealand.

There’s also urban sprawl to consider. Much of what is now downtown Morinville used to be farmland, for example, and the Edmonton border creeps ever closer to the Crozier farm – Lenard predicted they’ll have to move at some point. Still, he suspects his sons Jason and Brett would keep the farm going for another 20 years at least.

Jason said he thought often of his family’s history, and was proud to be part of one of the first farm families in the province.

“This wouldn’t be here without a lot of hard work from my ancestors.”