The war on deadly opioids

The death toll for fentanyl continues to rise in 2017, with nearly double the number of deaths being reported in the first six weeks of the year. According to Health Canada, from Jan. 1 to Feb, 11, 51 people died from overdosing on fentanyl.
Apr 19, 2017 12:00 AM By: Jennifer Henderson, Local Journalism Initiative reporter 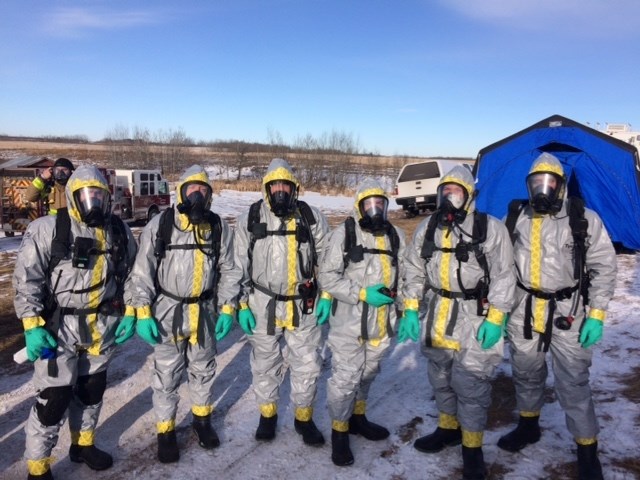 The members of the CLEAR team responding to a call wearing their Level B protection. The suits are totally protective as well but not totally encapsulating. They have an opening for the face

The death toll for fentanyl continues to rise in 2017, with nearly double the number of deaths being reported in the first six weeks of the year.

According to Health Canada, from Jan. 1 to Feb, 11, 51 people died from overdosing on fentanyl. In 2016 during the same six weeks, 28 Albertans died as a result of a fentanyl overdose.

The drug was first found in St. Albert in 2014 and since then the St. Albert RCMP’s drug unit said that currently there is at least one pill found in around 80 per cent of their overall drug cases.

When the drug was first found in 2014, around 200 fentanyl pills disguised as OxyContin were seized from a home. Although the drug unit hasn’t seized that amount of pills since, they are finding smaller amounts of the pills more frequently during their drug seizures.

In December of last year an even stronger opioid was found in the city. A drug bust turned up pills that looked like OxyContin but after sending the drugs away for testing, it turns out it was the deadly opioid carfentanil. Since then, a second seizure of carfentail has been made in St. Albert.

Cpl. Brad McIntosh, a member of the K-Division Clandestine Lab Enforcement and Response (CLEAR) team said that the power of the drug has forced first responders to change how they handle any drug related situation.

“Fentanyl and toxic opioids have been a huge game changer in how first responders deal with anything that could be drug related because fentanyl and its analogs have been found in cocaine, in methamphetamine, in ecstasy and in heroin. Even if you think you are dealing with one of those items the reality is that it takes your response protection equipment to the maximum.”

McIntosh is a member of the CLEAR team, which specializes in responding to situations where illegal synthetic drug production or processing is suspected. They will deal with fentanyl and other toxic opioid pill presses and contaminated scenes along with any drug seizures that are believed to contain opioids.

The team has six dedicated positions that work out of the Edmonton K-Division office and respond to calls throughout Alberta and in Yellowknife and will sometimes assist in situations in B.C. They work along with 40 other police officers trained across the province who are able to assist in situations where the CLEAR team needs to be called.

In the past three years the St. Albert detachment has had to call the CLEAR team twice to assist with a drug situation. Overall McIntosh said that their call volume across Alberta has approximately doubled in the last two years.

Sometimes the CLEAR team will assist remotely in something as simple as providing guidance on the personal protective gear the local detachment should be wearing in the situation. Other times the team will come in wearing a fully encapsulated suit and contained breathing apparatus to help seize a pill press or enter a room with powder in the air.

“It’s kind of a case by case thing and not a blanket approach, but there are certain things that are going to bring us to a location rather than just provide phone advice,” McIntosh said.

The CLEAR team will typically enter a situation when the local detachment doesn’t have the knowledge or the equipment to proceed on their own. If there is a container of chemicals giving off a gas or if the scene has containers of unknown liquids, the CLEAR team will enter the scene. Sometimes they will assist the local detachment with taking samples to send away for testing.

Usually the team doesn’t know exactly what type of drugs they are dealing with until the drugs are sent away to Health Canada for testing, so both the local detachment and the CLEAR team have to treat every situation as potentially dangerous.

“We can’t afford not to think that way,” McIntosh said. “We can’t assume that something that looks like cocaine is cocaine alone. We are assuming everything is harmful now.”

McIntosh said that the deadly drugs are getting into Canada from China. Drug dealers are ordering the potent drug through the Internet and it is being delivered to their doorstep through the mail system.

McIntosh said that this is revolutionizing the selling of drugs. The drug is so strong that only a small amount needs to be imported and it is not necessary to make a personal connection with a drug trafficker. It can all be done anonymously online.

Once the drug is in Canada, drug dealers are diluting the strength and selling it.

Typically in St. Albert the drugs are found as small green pills disguised as OxyContin, but they have been found in other formats as well. The CLEAR team has found the drug mixed in with many other drugs and alone in both powder and pill formats.

After the drugs are found during a seizure, they need to be sent away to Health Canada for testing. To proceed with any court case, drugs need to be tested to certify what type of substance is found. Samples are taken, packaged and labelled very carefully, so as not to risk contaminating anyone handling them down the line.

After the case has wrapped up in court, the drugs are then sent back to the CLEAR team to be safely disposed of.

For more information on fentanyl visit fentanylsafety.com. Anonymous tips can be provided to the drug tip line at 780-460-3784 (DRUG).