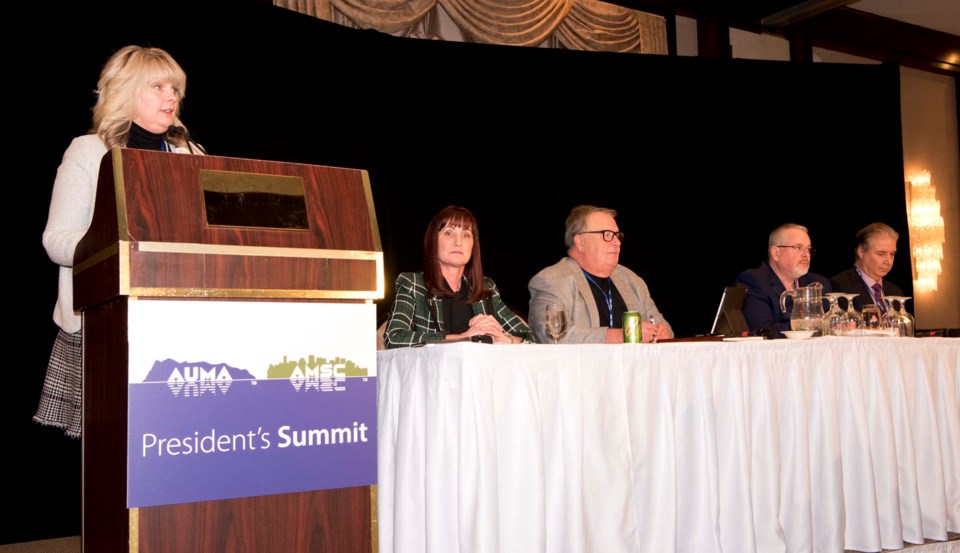 About three years ago, Vegreville had an economic problem as big as its famous giant egg.

The federal government had moved a major immigration centre out of the community, costing it some 280 jobs and $16 million a year in GDP, said Mayor Tim MacPhee.

“Everyone said we were going to lose all our businesses,” he said, but they haven’t. Instead, the community, town administration, and the local chamber of commerce have teamed up to give local companies the boost they need.

“To this day, none of our small businesses have closed their doors.”

MacPhee was one of about 200 municipal leaders at the Chateau Lacombe in Edmonton last week for the Alberta Urban Municipalities Association President’s Summit on Municipal Finances.

The conference was meant to show the province that cutting funds to municipalities had a trickle-down effect on the Alberta economy, said St. Albert Mayor Cathy Heron, who hosted a panel discussion at the conference.

“Economic development is a huge priority for all municipalities,” she said, and communities need to work with the private sector to restore the Alberta Advantage.

Heron’s panel examined the state of Alberta’s business community and how governments could work with businesses to get the economy back on track.

Low oil prices and delays in pipeline construction have made for turbulent economic times in Alberta, suggests a survey released this week by the Alberta Chambers of Commerce.

“Three out of the four of our last land acquisitions were outside the province,” he said of his own company, adding that many other investors are also leery about investing in Alberta.

Alberta Chambers of Commerce president and panellist Ken Kobly said that survey his group released this week found 54 per cent of Alberta businesses were negative about the province’s long-term future – a shockingly large jump from the 33 per cent that did last July.

“We all need to work together to somehow turn that negativity around,” he said.

Panellist Christopher King, past president of Economic Developers Alberta, noted fibre optics are not considered an essential utility under the Municipal Government Act, which limits a community’s ability to pass taxes or borrow cash to build those networks.

“Every business is in the business of technology, and we’re falling further and further behind on the world stage because of that lack of infrastructure.”

Communities should also consider social infrastructure such as transit, which is often vital for people in entry-level jobs, King said.

“If our workers can’t get to work, then I don’t have a worker and I can’t open my business.”

The panellists said governments and business could reap great benefits from working together. Strathcona County has struck a panel with its chamber of commerce to cut back on burdensome regulations, for example, while Edmonton backs Startup Edmonton – a group that supports emerging tech companies such as Jobber, which is now the second-fastest growing software company in Canada.

Vegreville teamed up with its local chamber of commerce and ordered its economic development office to spend 80 per cent of its time supporting local businesses, MacPhee said. They’ve given small businesses a temporary tax break (one offset by a hike on bigger businesses), had the chamber offer courses on business success, and encouraged residents to shop local.

“We didn’t inject cash. All we brought was positivity,” MacPhee said.

The panellists said municipalities need to create a positive atmosphere if they want to support the businesses that support their communities – a statement MacPhee echoed.

“The whole community has to believe it’s worth it to be positive and support each other,” he said.