Those vaccinated in April eligible for second dose, Kenney says

The province is also calling all snowbirds and anyone else who has received their COVID-19 vaccines outside of Alberta to submit their immunization records to Alberta Health Services' public clinic.
Jun 11, 2021 9:33 AM By: Jessica Nelson 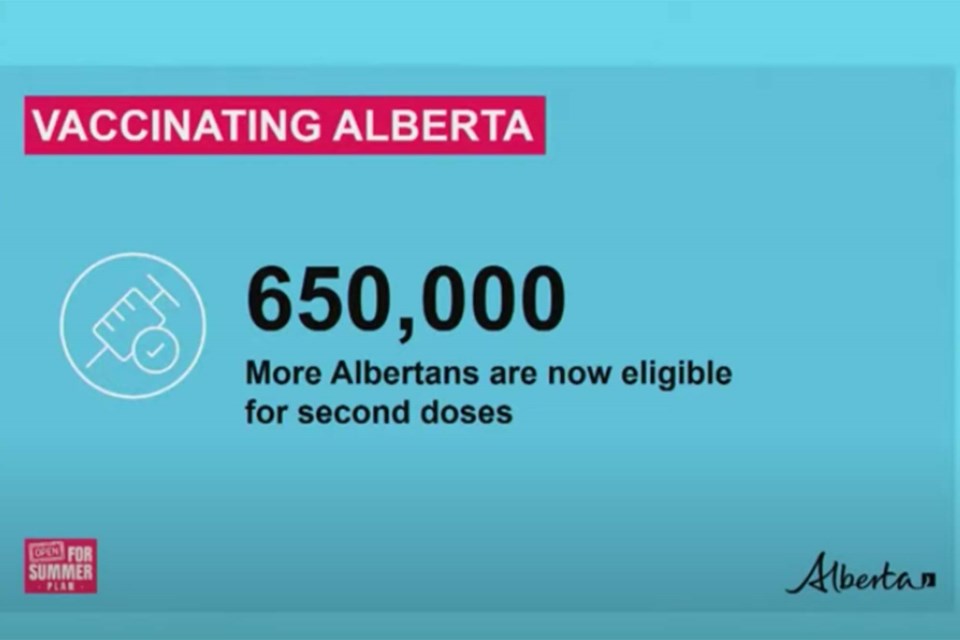 Premier Jason Kenney announced yesterday anyone who received their first vaccination in April now qualifies for a second dose. June 10, 2021.

Eligibility for the second dose of the vaccine has once again been bumped up in the province.

On June 10, Premier Jason Kenney announced anyone who received their first dose of a COVID-19 vaccine in April is now able to book their second dose.

“This means an additional 650,000 Albertans can now start booking their second doses, right now,” said Kenney in a press conference.

Kenney emphasized the safety of the vaccines and encouraged Albertans who have yet to receive their first dose to book an appointment to get one.

“For those who have doubts, just look around you. There are literally millions of Albertans who have had the vaccine now ... in fact we have reported fewer than 500 adverse health responses to more than three million doses administered, meaning that 99.99 per cent of vaccinations in Alberta have had no significant negative health effects,” he said.

The province is also calling all snowbirds and anyone else who has received their COVID-19 vaccines outside of Alberta to submit their immunization records to Alberta Health Services' public clinic.

“The best vaccine is the first one offered, and I am pleased that there are many Albertans who made the choice to be vaccinated while vacationing away from home,” said Minister of Health Tyler Shandro in a press release.

Data from the province from June 9 shows an additional 178 cases of the virus being reported in the province, with the total active cases sitting at 3,810.

“There are just over 3,800 active cases, which is a 40-per-cent decrease from the first of June when Stage 1 began. It's also the fewest active cases since October,” said Kenney.

Currently there are 306 people in the hospital with COVID-19 with 81 of them in the ICU. In the last 24 hours there were six additional deaths reported, bringing the total number of people who have died from the virus to 2,262.

Sturgeon County numbers have dropped to 23 active cases of the virus, bringing the total to 974 people who have recovered from the virus.

Morinville saw a slight increase of the virus with three additional cases being reported by the province, for a total of six active cases. Altogether, 533 people have recovered from COVID-19 in the town.

The province reported the testing positivity rate as 3.3 per cent. In the last 24 hours, 5,501 tests were completed, with a total of 4,586,127 tests being completed overall.