Tom Paxton and the Don Juans livestream through Arden Theatre 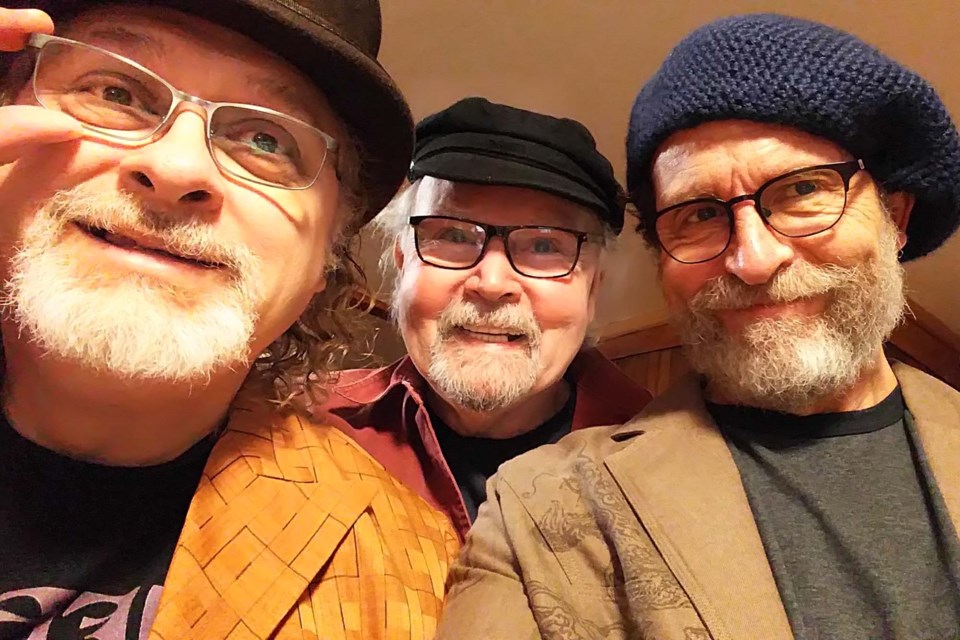 From left to right Don Henry, Tom Paxton and Jon Vezner, collectively known as Tom Paxton and the Don Juans, are livestreaming a concert on Thursday, April 15 through the Arden Theatre.

Now in his eighties, folk icon Tom Paxton is unlikely to tour Canada. But if there’s a silver lining to COVID-19, it’s that major league singer-songwriters such as Paxton are streaming concerts across North America.

The Grammy Lifetime Achievement Award winner once again teams up with tunesmiths Jon Vezner and Don Henry known collectively as the Don Juans. They are presenting a livestreamed concert on Thursday, April 15, through St. Albert’s Arden Theatre. Following the concert, a Q&A using a streaming platform will allow audiences to text questions.

“For me personally, Tom Paxton is really the selling point. That’s not to take away from the Don Juans given his stature or place in folk music history. He comes from an era where he influenced every generation coming after him. He’s celebrated as one of the great folk singer-songwriters of his time. It seemed a no-brainer to present him,” said Caitlin North, Arden Theatre professional programming presenter.

Paxton's career has taken him from legendary coffee houses such as The Gaslight Café in Greenwich Village during the sixties folk revival to Albert Hall in London and Carnegie Hall in New York. His songs not only resonated with audiences demanding change. His affable personality also created an intimate dynamic that charmed listeners.

Along the way, he befriended numerous singer-songwriters, long-ball hitters such as Dave Van Ronk, Bob Dylan, Phil Ochs and Eric Andersen. Throughout the past 30 years, he’s taught a generation of traditional folksingers that it was noble to write your own songs and speak about injustices around us.

Strongly influenced by Woody Guthrie’s populist songs, Paxton championed causes that promoted human rights, civil rights, labour rights and the environment. A political activist through song, several of his landmark songs are still relevant today. "Beau John," was composed after attending a Freedom Song Workshop in Atlanta, Georgia in 1964. Another song, "Goodman, Schwerner and Chaney," was written about the brutal murders of three civil rights activists by members of the Ku Klux Klan.

“He’s always been a very political singer and I appreciate the way he captures history. We’ve been living in a wild world and I’m curious to hear his spin compared to what it was back in the sixties,” North said.

Although Paxton’s deliberate and searingly honest lyrics are serious, the Don Juans keep their show light and witty through friendly banter and tall tales. Despite all the on-stage ribbing, Grammy Award winning singer-songwriters Jon Vezner and Don Henry are also serious contenders.

Born in Minnesota, now a Nashville resident, Vezner has a straight-to-the heart emotional sensitivity. Henry, on the other hand, learned to play guitar with a Paul Simon songbook. Currently his songs are recorded by the likes of Miranda Lambert, Kathy Mattea, Oak Ridge Boys, Ray Charles and Conway Twitty.

“These three artists have a way of capturing the human spirit in a way that people of all walks of life relate to. They have a universal understanding of the human condition. They have a nice sense of community and they come together in these troubling times.”