A group of volunteers are hammering home the need for a new library. Only instead of shelves filled with books, the library will be filled with saws, sewing machines and other things.
0
Oct 31, 2017 1:03 PM By: Dayla Lahring 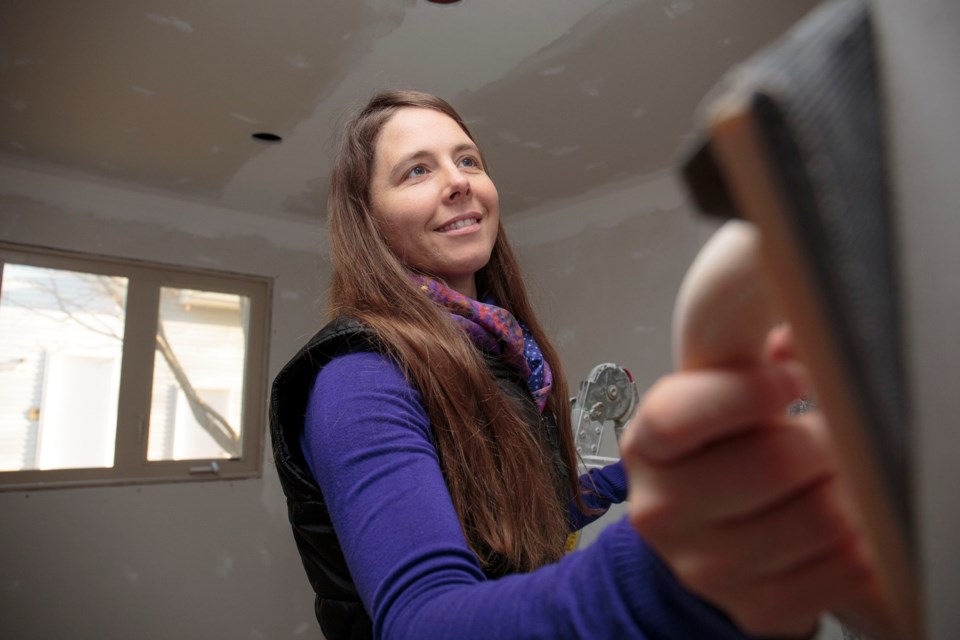 Bridget Reschke, organizer of the St. Albert Tool Library, sands down a wall at her home on Oct. 27. She says the group is currently looking for a place to set up shop. The library will feature different tools to help with gardening, canning and home improvement. She says it will open in March.

A group of volunteers are hammering home the need for a new library. Only instead of shelves filled with books, the library will be filled with saws, sewing machines and other things. “We’ll offer those random kind of things that people use once every year or every two years,” says Bridget Reschke, organizer of the tool library. “We are really excited to get this going.” The tool library stemmed from an idea Reschke and a fellow neighbour had during a block party. Together they wanted to create an initiative that would help promote a connected community, and tool sharing quickly jumped to mind. “We decided to make it city wide since we have a lot of people who are 50 plus in our community,” she says. “So they might not need this type of service, and some might be even looking to get rid of some of their tools.” In September Reschke and her husband created a Facebook page called the Tool Library of St. Albert. They’re now calling on community members to help form a committee to help run the group. It will operate similar to the tool library located in Edmonton. For a flat membership fee of $50 annually, people can book items to help in home restoration and repair. There will also be items for sewing, canning and gardening. “Tool libraries are usually just tools, but we’ve expanded ours to be more like a ‘thingery’, which is basically a library of stuff,” she says. Angie Dedrick, neighbourhood development coordinator at the city, says the initiative will help build a stronger community within St. Albert. “I think it’s a great idea,” she says. “I’m excited because the city is really working towards building a sense of community, and connectedness and this kind of initiative helps people have a way to give back to their community.” “People can give tools that they’re no longer using, but it also has a way for us to share skills with each other.” She says the tool library will also help low-income families afford to fix up their homes. Reschke says a few other organizations, such as the FCSS and the St. Albert Food Bank, have also voiced support for the organization. Right now the group is working to secure funding to afford a sea can, which costs around $4,000 to purchase. It is expected to open in March, located in the parking lot of Grace Family Church. The library will be open on Thursday evenings to start, with a borrowing cap of up to eight items. Extra costs could be associated with some tools that would require parts to be replaced over time. Reschke says she has received overwhelming support from the community. Since starting up in September, the Facebook page has almost 200 likes. “It’s awesome. Everyone that I’ve talked to has been so excited for this,” she says. “Especially since there’s a lot of condo and multi housing going up, they don’t have space to store tools.” To kick things off, the tool library is hosting a Fix It Café on March 17 at the public library. People can bring one broken item and learn how to fix it. For more information or to get involved, visit their Facebook page at: https://www.facebook.com/stalberttoollibrary/