Grain farmers in Alberta didn't face the same sorts of problems from COVID-19 that other agricultural producers did, and actually had an easier time getting their products to market, but they're still recovering from a bad winter.
Jul 8, 2020 2:00 PM By: Jennifer Henderson, Local Journalism Initiative reporter 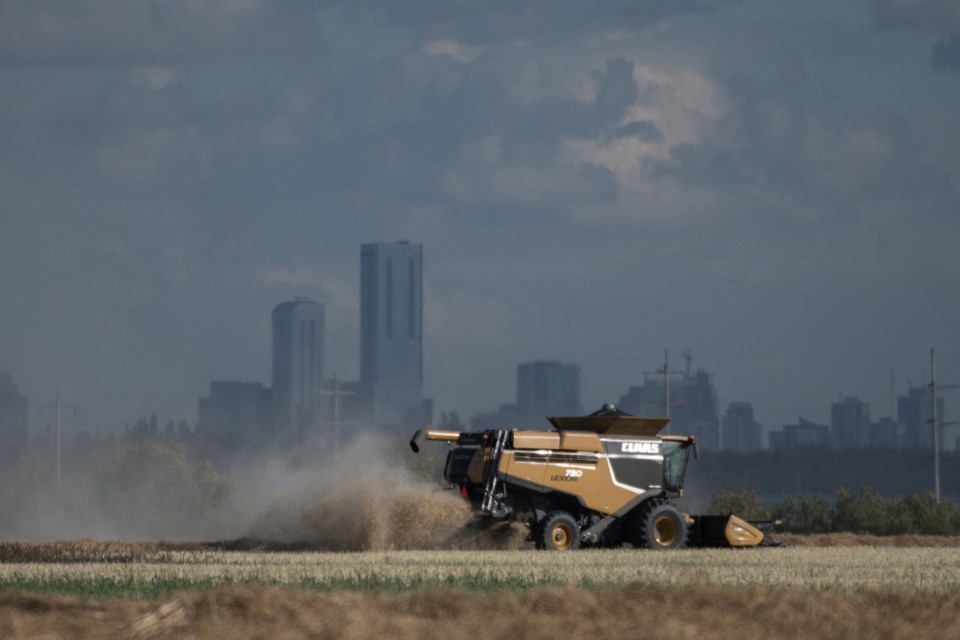 While the COVID-19 pandemic has battered other areas of Alberta's agricultural sector, canola and other grain farmers have escaped relatively unscathed, says one industry expert.

Harvesting and processing canola is not as labour-intensive as other agriculture sectors such as beef or pork, and there's little risk of a large outbreak since processing centres are naturally socially distant, said Ward Toma, general manager of Alberta Canola.

Securing the N-95 masks they need to use while spraying fields posed a challenge to some canola farmers, but Toma said the province helped outfit farmers with the masks as they were deemed an essential service.

“From an occupational health and safety standpoint, those masks are required for use in certain situations on farms for spraying and treating seed and working in very dusty situations – a fabric face mask isn't going to cover it ... that caused more than a few farmers to have a bit of a headache,” Toma said.

Less consumer goods travelling by rail proved an unexpected boon for grain farmers, who found it easier to export and transport their products because there was rail capacity to do so.

"The grain movement was very, very good because the railways had nothing else to haul,” Toma said. “It was an unintended consequence. The economy slows down and now the railways have nothing but time on their hands to haul grain."

Between 85 and 90 per cent of canola grown in Canada is exported to other countries, and a few places like China, the United States and Japan are major purchasers of canola. Toma said the export market stayed strong because of the diversity of countries the canola industry exports to.

“We work real hard as an industry to make sure that we're not really held captive (by one country),” Toma said.

The real challenge for grain farmers this year was bouncing back from a difficult fall and winter. Toma said farmers in central and northern Alberta are still recovering from the tough season.

“It was very poor harvest conditions. It was wet, they had snow, the snow would go away, it was wet and we had a significant amount of crop – canola, wheat and barley – left over winter. Then they had a lot of wet conditions (this) spring,” Toma said.

Last year, 1 million acres of crop were left on the fields across the province, with early frost and snow impeding the ability of farmers to harvest. Insurance adjusters with the province's Agriculture Financial Services Corporation (AFSC) had completed nearly all outstanding inspections on those acres of unharvested crops as of May 20.

“Farmers in Alberta have just gone through one of the toughest harvests in recent memory and now face the many repercussions of COVID-19. We are working with AFSC to simplify their operations to be more efficient at processing claims while also improving service standards and responsiveness for farmers and ranchers,’ Devin Dreeshen, Minister of Agriculture and Forestry said in a May 22 statement.

Alberta farmers took home around 70 per cent less cash in 2018 due to high costs and low prices, according to Statistics Canada, with the 2019 harvest conditions proving to be even worse.

A report from Statistics Canada released in 2019 found Canadian farmers saw a roughly 45-per-cent drop in realized net income (cash after costs and depreciation) in 2018 – the biggest one-year drop since 2006. Alberta farmers saw their incomes plummet roughly 68 per cent to about $535,062, down from about $1.7 million in 2017.

Jim Vercammen, a food supply economist at the University of British Columbia said during the pandemic, demand for certain agriculture products spiked, causing some shortages.

Baking supplies like wheat and yeast were cleaned off the shelves by consumers.

“I think people were panic buying, so there (was) a real shortage of wheat in the current market,” Vercammen said.

The economist said the early futures market prices for wheat spiked up when consumers began to do more baking, but the long-term prices of wheat tanked because traders looked ahead and saw a slowdown in the global economy.

“That's going to put a downward price on corn and other feed grains, and that's going to bring prices of everything down,” Vercammen said.

“You get this really weird phenomenon where short-term wheat prices spiked up because of the hoarding by consumers. But more distant futures prices were really low because everyone knew there's going to be a slump in the more distant future,” Vercammen said.

While prices of wheat and other grains went down, the price of corn was also brought down by energy prices tanking.

Corn is used to produce ethanol, and when oil prices tanked so did the price of ethanol. Vercammen said corn is an important link between the food and energy markets.

Jennifer Henderson is the Local Journalism Initiative reporter for Great West Newspapers. Her position is funded by the Government of Canada.