Toyota’s popular crossover took to the roads in 2001, and since then has developed a reputation for quality and endurance that keeps customers coming back.
0
Oct 7, 2017 12:03 AM By: Garry Melnyk 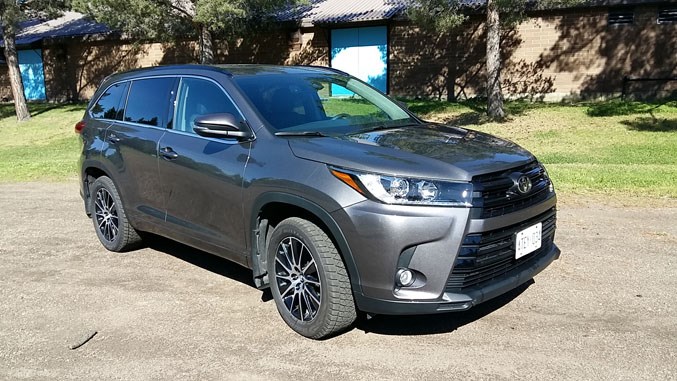 Toyota’s popular crossover took to the roads in 2001, and since then has developed a reputation for quality and endurance that keeps customers coming back. The Highlander became one of the first car-based mid-size SUV or mid-size crossovers and is a crossover counterpart to the more rugged, truck-based midsize 4Runner.

The Highlander became Toyota's best-selling SUV before being surpassed by the smaller RAV4 in 2006. The shape is still familiar, although the front end has been tweaked for 2017 with the family grille; the wide-mouth trapezoid that is now on Toyota models of all sizes and types. Still in its third generation, Highlander is much the same as the 2016 model, but with a new package available – the SE option.

The SE is a package available on the XLE trim (which is the top of the line), giving the vehicle a sportier grille, second row reclining captain’s chairs (SE is a seven seater, Highlanders can also be had with room for eight passengers), roof rails, ambient lighting, SE-specific paint options and black alloy 19” wheels.

My tester was a non-hybrid V6 putting out 265 horsepower from its 3.5 litres and sporting a new-for-2017 8-speed automatic transmission. I did very little highway driving in this rig so in mostly urban driving I was able to achieve 13L/100km in fuel consumption. Not bad considering the size of the engine and the weight of the Highlander. It drove well, feeling much larger than a mid-size crossover.

The Highlander also gets brownie points for the smooth steering, slightly firm ride and good stopping power from the brakes. Overall it gives the impression of a go-anywhere off roader that will tackle anything no matter what the terrain.

The passenger cabin is more than spacious and cargo-friendly when the third row of seats is folded down. Getting kids into the rear-most seats is relatively easy as access to them is helped out by the sliding second row. More than comfortable for long drives, the wide driver’s and front passenger seats will accommodate a wide variety of body types. Second row passengers should be comfortable enough too at least in terms of leg room. Stowing stuff on the inside is also a plus with lots of cubbies and shelves.

Although not as classy in exterior styling or interior trim as a Mazda CX-9 or GMC Acadia, the Highlander presents itself as rugged and capable for worry-free long-term ownership. It’s easy to recommend Highlanders in any trim, just based on the vehicle’s reputation. Equipped with blind-spot monitors and rear cross-traffic sensors, the Highlander also comes with intelligent cruise control, lane departure warning (and an active departure-assist system, which will attempt to pull the car back between the lines, presumably in case a driver isn’t paying attention).

There are definitely a few things I would change about it, like offering more than just a black interior. There are two other more colourful trim options for other Highlander models. My Pre-Dawn Grey Mica coloured tester with the black interior was just too drab. The Highlander looks much better in a white or red exterior colour, in my opinion.

I also think more effort could have been put into the user interface on the centre console. There is little feedback when you use the buttons and they don’t have a quality look or feel to them. The roll up tonneau cover is also a source of irritation as there is nowhere to store it when using the third row seat. So it sits on the floor or stays home in the garage.