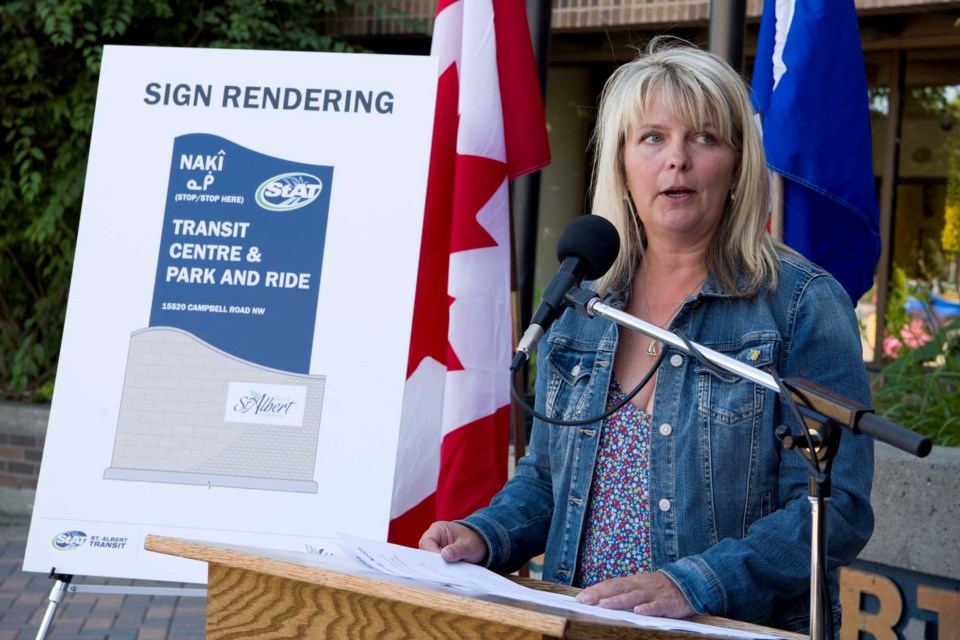 BUS STOP, LITERALLY — St. Albert Mayor Cathy Heron unveils the name of the Nakî Transit Centre Aug. 5 at St. Albert Place. The name is based on the Cree word for

St. Albert’s newest transit centre will have a Cree name when it opens later this month, the city’s mayor has declared.

Mayor Cathy Heron unveiled the official name of the city’s new south-side transit centre on Aug. 5 before a handful of guests in front of St. Albert Place.

Formerly known as the Campbell Road Park and Ride Transit Centre, the $30-million facility will henceforth be called the Nakî Transit Centre & Park and Ride. Nakî (pronounced “na-gee”) is a Cree and Michif word that means “stop” or “stop here.”

Heron said the city picked this name in consultation with the Payhonin Working Circle – the city’s task force for Indigenous reconciliation.

Sharon Morin of Michif Cultural Connections, who sits on the working circle, said she suggested this name because it is relevant and easy for non-Cree speakers to pronounce – important, as Cree names are often anglicized by non-Cree speakers.

“This valley and this location has always been a place to stop,” Morin said – a place for people to gather and prepare before setting out on a journey. Fur traders and travellers stopped in St. Albert to shoe horses or buy supplies on their way to Fort Edmonton or Athabasca Landing, and would stay in the community’s four hotels.

The name Nakî acknowledges the languages of this land (Cree and Michif) and the people who came before us, Morin said.

“I’m always impressed when I walk down the street (in St. Albert) and see the Cree words,” Morin said, referring to the Cree translations on the Founders’ Walk and street signs downtown.

“When I see the Cree on Founders’ Walk, it gives a person a sense of being, a sense of place,” she said.

Construction of the Nakî Centre started in May 2019 and was near completion, Heron said. The centre itself was at 15520 Campbell Road just outside of St. Albert by the Anthony Henday and the Northern Lights Cemetery.

This new transit hub has been in the works for over a decade and should address the many complaints about the lack of parking at the Village Landing bus centre that pile into city hall every September, Heron said. The hub would also link into Edmonton’s LRT network should it ever get this far north.

Heron said the new centre would have some 800 park-and-ride stalls – more than twice the 350 at Village Landing – as well as washrooms, a bike lock-up, and a passenger drop-off zone. The old centre would soon become the home of Fire Hall No. 1, which is set to move from its downtown location in the near future.

Heron said the city would hold a grand opening for the Nakî Centre Aug. 27. The centre is set to open to the public Aug. 30.