U of A solves fireball mystery 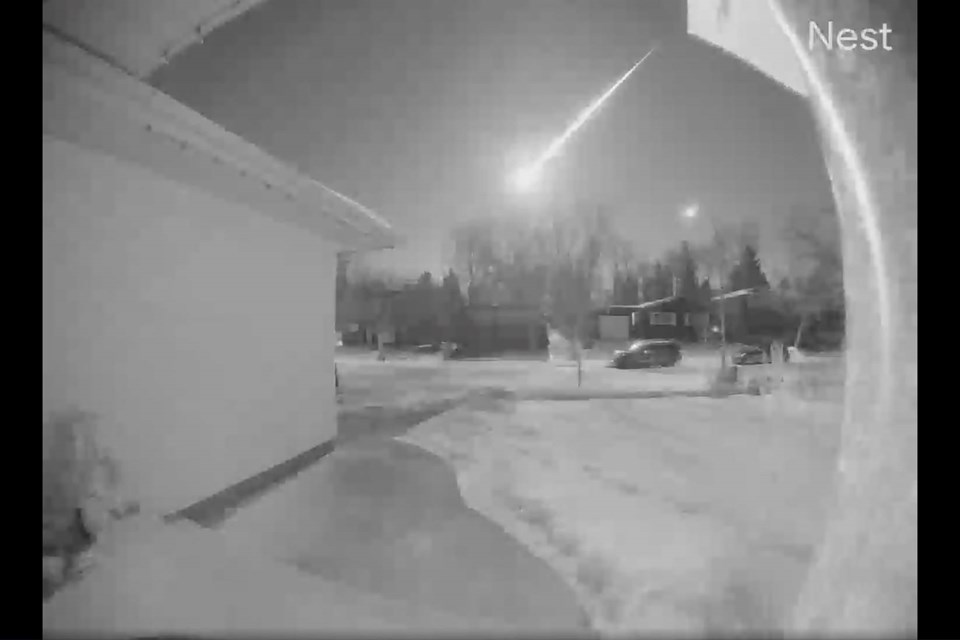 ACTUALLY A COMET — This spectacular fireball spotted over St. Albert on Feb. 22, 2021 (as seen here from a doorbell camera in Grandin) was caused by a chunk of a comet, U of A researchers say. KYLA SYKES/Photo

Put down your nets and magnets, meteorite-hunters – last Monday’s fireball was a comet, and not a shred of it reached the ground.

University of Alberta researchers put out an analysis Feb. 25 about the cause of last Monday's fireball.

People throughout Alberta and parts of Saskatchewan spotted a spectacular fireball blaze across the early morning sky at 6:23 a.m. on Feb. 22. The fireball lit up entire neighbourhoods before it vanished, leaving observers awestruck.

U of A meteorite collection curator Chris Herd and post-doctoral research fellow Patrick Hill used imagery from the Global Fireball Observatory to determine the fireball’s origin. The observatory consists of a world-spanning network of cameras that point at the night sky in hopes of recording comets and meteors.

Using imagery from the Miquelon Lake and Vermillion cameras, Hill said they determined the object that created Monday’s fireball ignited about 120 km north of Edmonton at a height of about 46 km – high enough to be visible to a huge swath of the province, and much higher than the 15 to 20 km height at which rocky meteors typically burn up.

“It was travelling extremely fast,” Hill noted – about 220,000 km/h, or fast enough to fly from St. Albert to Westlock in one second and three times faster than the Buzzard Coulee meteorite of 2008.

Analysts also determined the fireball came in at a steep angle relative to our solar system's orbital plane, which would be strange for a meteor, as those tend to strike Earth in line with the plane.

These and other clues led Hill's team to conclude that Monday’s fireball was caused not by a rocky meteor, but an icy chunk of comet that was probably the size of a grapefruit or a basketball, he said. Since comets are basically dirty snowballs of ice and dust, this chunk would have slammed into Earth’s atmosphere like a brick wall and left nothing to fall to Earth.

“It would have just disintegrated,” Hill said.

St. Albert astronomer Murray Paulson said he was a bit disappointed by this news, as he and his friends were all geared up to go meteorite-hunting. Still, the fact that this fireball was a comet is fabulous news, as this is likely the first time the Observatory network had detected a comet.

Comets are thought to originate from the Oort Cloud at the edge of the solar system, Paulson noted. That cloud is thought to be full of icy debris, some of which gets knocked our way by the tug of Jupiter and Saturn to create comets.