U of A studying effects of pandemic on St. Albert student athletes 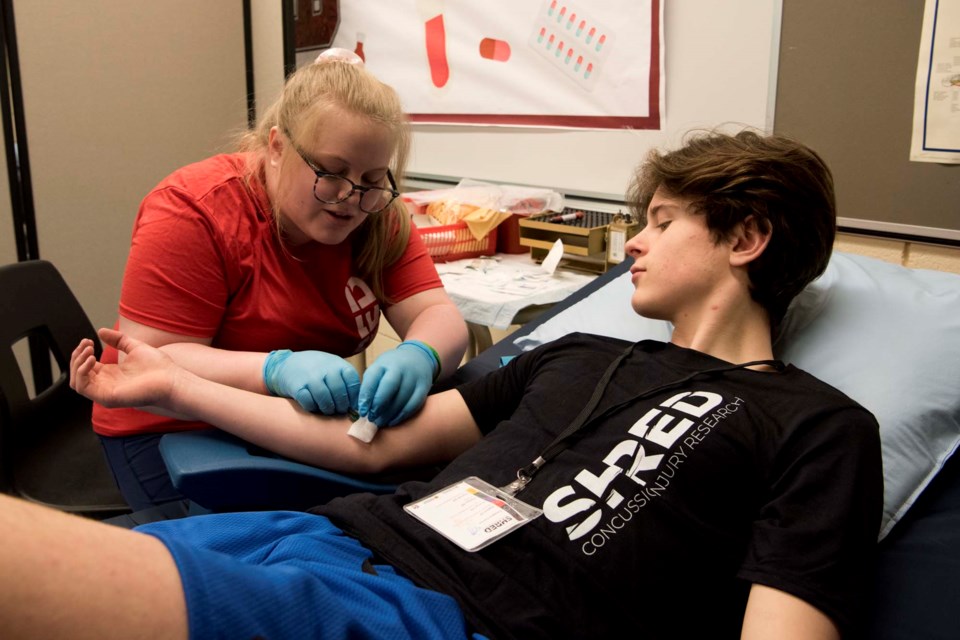 Bellerose student Cameron Knisely watches as registered phlebotomist (blood-drawing specialist) Taylor Ormann takes a blood sample from him as part of the SHRED concussion research study last year. The three-year study aims to be the most comprehensive one yet of concussions in youths. KEVIN MA/St. Albert Gazette

University of Alberta researchers are studying the effects of the pandemic on the health of St. Albert’s student athletes as part of a national research project on concussions.

Bellerose Composite student athletes lined up a year ago this month for blood, physical, and cognitive tests as part of the Surveillance in High Schools to Reduce the Risk of Concussions and their Consequences (SHRed Concussions) study – a three-year nationwide research project backed by the National Football League that aims to study concussions in high-school students.

Some 95 St. Albert students at Bellerose and Paul Kane underwent baseline testing in the study last year prior to the pandemic’s arrival in March, said Martin Mrazik, the university's co-investigator for this study.

“Obviously when they’re not playing sports, they’re not going to be injured in the context of sports,” Mrazik said – a problem for SHRed, which was all about sports injuries.

Mrazik said his team did manage to study and treat two students with concussions prior to the sports stoppage last March, and were continuing to track psychological and physical heath through surveys and other means. He suspected the study would have to be extended beyond its original three-year timeframe because of the pandemic, and hoped it could expand to cover additional sports such as sledge hockey.

In the meantime, Mrazik said his team has launched a mini-study within SHRed on how the pandemic had affected the mental health of athletes.

“There’s clearly been a significant increase in mental health concerns in everyone, but also in youth,” he said.

Initial results suggest a significant decrease in physical activity amongst students as well as higher rates of anxiety and depression, Mrazik said.

Sports were a major part of school life for many of these athletes, and it’s been tough for them to miss out on the connections they get through them, said Bellerose athletics director Michael Thompson.

“For a lot of them, it’s part of their identity.”

Organized sports have been on hold at Bellerose since September, Thompson said. Coaches have held online meetups to keep in touch with athletes and keep their spirits up so they’re ready for whenever sports resume.

While some students are keeping their skills up through community sports, Thompson said the full effects of the pandemic on athleticism are unknown until students can take to the field for team games.

Mrazik said his team was still recruiting athletes for the SHRed study. Questions on the study should go to [email protected].