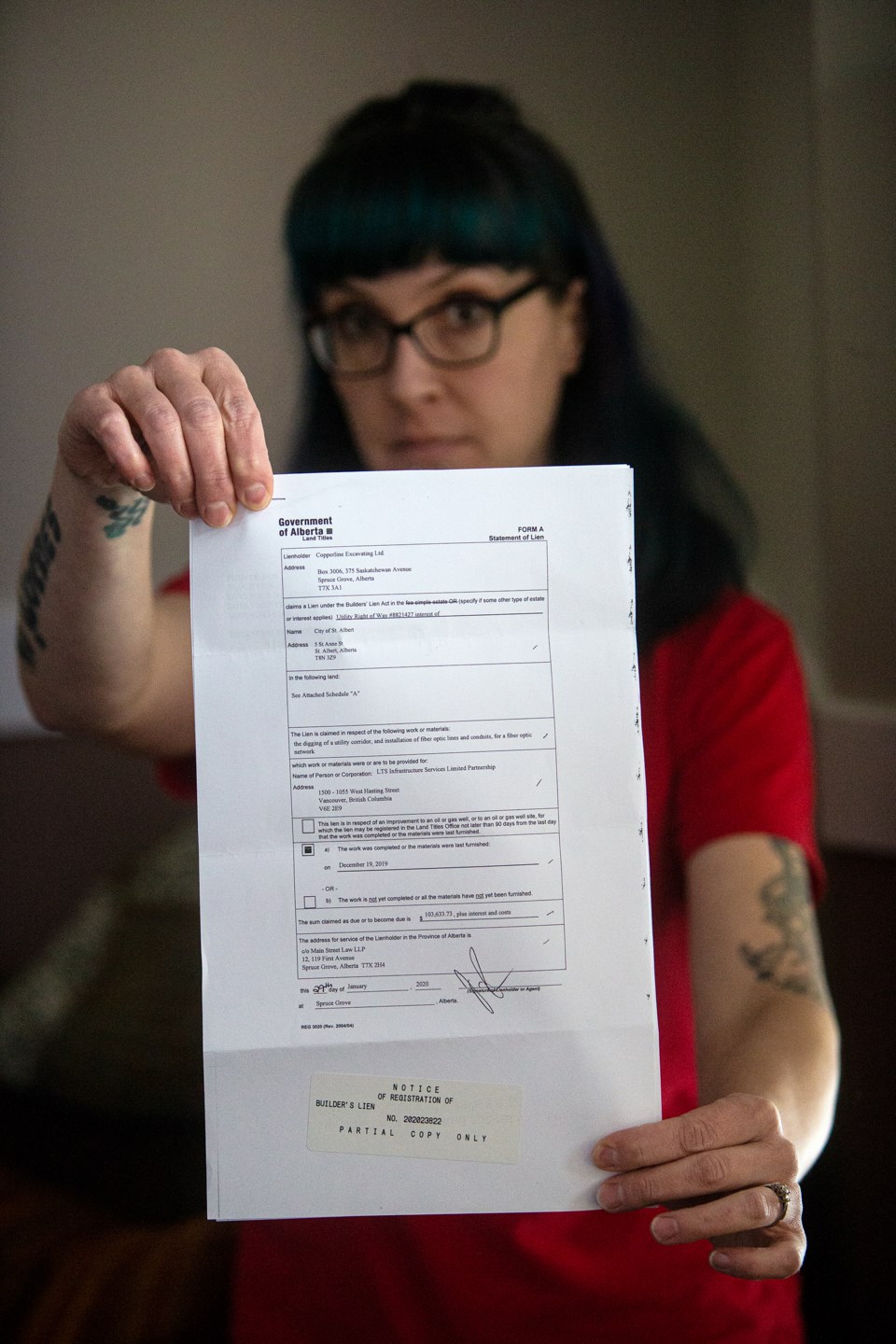 Lorna Wiens of St. Albert was one of the home owners who had a lien placed on her house. CHRIS COLBOURNE/St. Albert Gazette

Some St. Albert residents found themselves in the crossfire of a pay dispute between subcontractors on a major Telus fibre upgrade this week, when one subcontractor placed liens on approximately 250 properties in Erin Ridge and Deer Ridge.

Erin Ridge resident Lorna Wiens said her “stomach dropped” Tuesday night when she tore open a letter addressed to her that turned out to be a notice of lien on her property for more than $100,000, issued by Copperline Excavating Ltd.

“This is our house, and we have no control over who gets to put a lien on it,” she said.

“We try so hard to, you know, do everything right financially and we end up with this – with a bunch of lawyer-speak nobody understands.”

A builder's lien is a legal method for a contractor to recoup outstanding payment for work they have done. Any property with an outstanding lien on it may not be sold.

Copperline worked as subtrade for Ledcor Technical Services while completing Telus fibreoptic upgrades in Erin Ridge and Deer Ridge, and a Telus spokesperson said about 250 liens were “incorrectly issued.”

“This is a significant error, and we were only informed after the liens were filed," wrote Telus communications manager Doug Self in an email Wednesday afternoon. "Our subcontractor is working to have the liens removed as quickly as possible, following the judicial process. We are very sorry to those that have been affected and for any inconvenience this has caused, and are committed to ensuring this is fully resolved."

He added Telus employees would be going door-to-door in the community that evening to answer questions.

A few hours later, Self confirmed the process for reversing the liens would be initiatiated Thursday morning.

David Hoff, media relations officer for Ledcor, said in an interview there was a disagreement in cost after which Copperline “unilaterally” applied liens to some homeowners’ property.

“They chose to put the liens on, and they can choose to take them off,” Hoff said. “That's all their business, but our issue with them is resolved.”

He added Copperline “thought they had given us some information about some of the work they had done,” but Ledcor had not received it.

Hoff told CBC News Ledcor withheld some of its payment to Copperline due to a disagreement involving the quality, quantity and costs of the work.

Copperline did not respond to repeated requests for comment from the Gazette, but president Jamie Black told CTV News Wednesday the matter arose “due to non-payment of funds which we allege are owing to us by LTS Infrastructure Services Limited Partnership (Ledcor).” He added the company is relying upon the “rights and remedies available to us under Alberta law.”

On Thursday, the City of St. Albert posted a statement on its Facebook page, stating it is aware of the issue and sympathizes with residents who received a letter, but is not party to the dispute "which must work its way through the courts."

Wiens said while the matter has been resolved, she worries about potential long-term impacts on her family’s credit rating.

According to Self, once the liens are reveresed there would be no adverse effects on credit ratings.

Hoff said it is “very unusual” to bring innocent third parties into the mix of a dispute between contractors, and normally issues can be resolved by having a conversation.