When Tanner Wilson opened his front door, the last thing he expected to see was a firefighter standing on his doorstep. “The firefighter came rushing to the door,” Wilson said.
Aug 21, 2018 12:08 AM By: Dayla Lahring 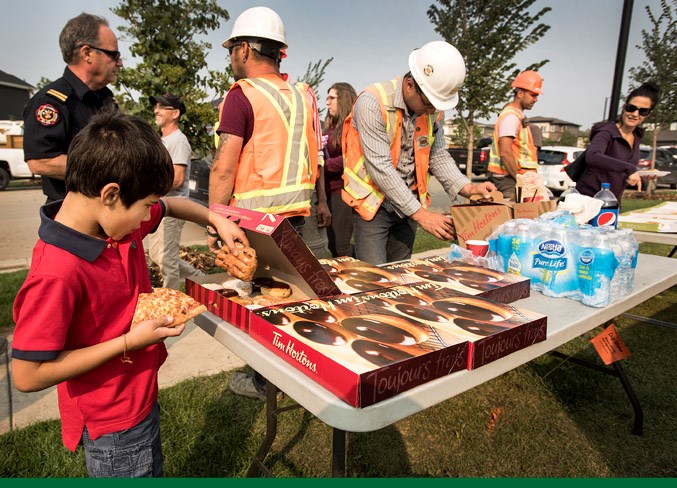 St. Albert firefighters and RCMP responded to a punctured gas line on Red Fox Way in St. Albert on Aug. 18. Residents in the area were evacuated from their homes while the gas company worked to shut off the gas. Here a young resident of Red Fox Way, Vincent Wilson, 6, takes advantage of pizza and doughnuts that, along with water and coffee, were provided to displaced residents and local workers by the St. Albert Fire Department.

When Tanner Wilson opened his front door, the last thing he expected to see was a firefighter standing on his doorstep.

“The firefighter came rushing to the door,” Wilson said. “He was in full bunker gear, so I thought it must be pretty serious, and he looked pretty frantic. We gauged that and thought, ‘OK let’s get out.’”

Wilson was among a handful of homeowners in Riverside who were evacuated from their houses on Saturday following a natural gas leak.

The leak was caused by excavation equipment digging holes for a fence next to a property on Red Fox Way. The street is a newer development, with some homes still under construction.

Terry Mahon, owner of B&T Fencing, said the company was using a skid steer to dig. At about three feet deep, the machine hit a gas line that hadn’t been marked by a locating company that was in charge of setting up flags for the construction crew prior to digging.

At 2:47 p.m., the St. Albert Fire Department received several calls from homeowners on Red Fox Way reporting a deafening noise thundering through the community. When emergency responders arrived on scene at 2:55 p.m., they immediately knew it was a gas leak.

“It was extremely loud – like a half a block away it was still hard to talk because the gas leak was so loud,” said Charles Tye, platoon chief of the St. Albert Fire Department.

“The escaping gas coming out of the ground from the hole, it almost sounds like you’re standing beside a freight train as it’s going by – it’s that loud.”

In order to shut off the leak, B&T Fencing helped personnel dig a large hole across the street to access the pipe. Tye said they had to dig by hand, since using any equipment could have created problems.

“You can’t use any construction equipment. It can cause an emission source,” he said.

Underground power lines also had to be identified and marked before they could break any ground.

Mahon said it was a lucky day for the construction crews and nearby homeowners. Had the gas pipe been hit in a different way, it would’ve become a deadly situation.

“It could have blown up the neighbourhood quite easily if there had been a spark,” he explained. “The way we were digging, there could’ve been a massive explosion. There’s no doubt about that, we were lucky that it happened the way it did.”

Residents were evacuated about a block away, upwind from the gas leak. The fire department called in a transit bus to provide shelter, along with pizza, doughnuts, coffee and water for homeowners to snack on.

While Wilson waited, he said he battled conflicting emotions.

“I have a half-a-million investment sitting on top of leaking natural gas line, so I was pretty scared about that,” he explained, adding that being on the bus was the “coolest part of it.”

“Everybody is so busy around their places with landscaping, nobody really talks to each other much yet because none of us are really settled yet. So it was nice everyone was able to talk.”

Another highlight was seeing the fire department act in true St. Albert spirit.

“It kind of describes St. Albert in a nutshell that the fire department shows up with pizza and coffee. It was nice.”

It took just under two hours from the time emergency personnel arrived to clamp and shut off the pipe. During the evacuation, the fire department set up ventilation systems in nearby empty homes to make sure any gas that wafted in through open windows would evaporate. Tye said normally gas would have evaporated into the air when the pipe was hit, but the strong winds were blowing it into the sides of homes.

By 4:43 p.m., residents were allowed to re-enter their properties. Tye said about 40 houses in Riverside were out of gas for the rest of the day, which ATCO employees worked to fix throughout the evening.

Mahon, who didn’t want to name the company in charge of laying down flags, said it’s important to always double-check for any gas or power lines before digging.

“You have to be careful,” he warned.