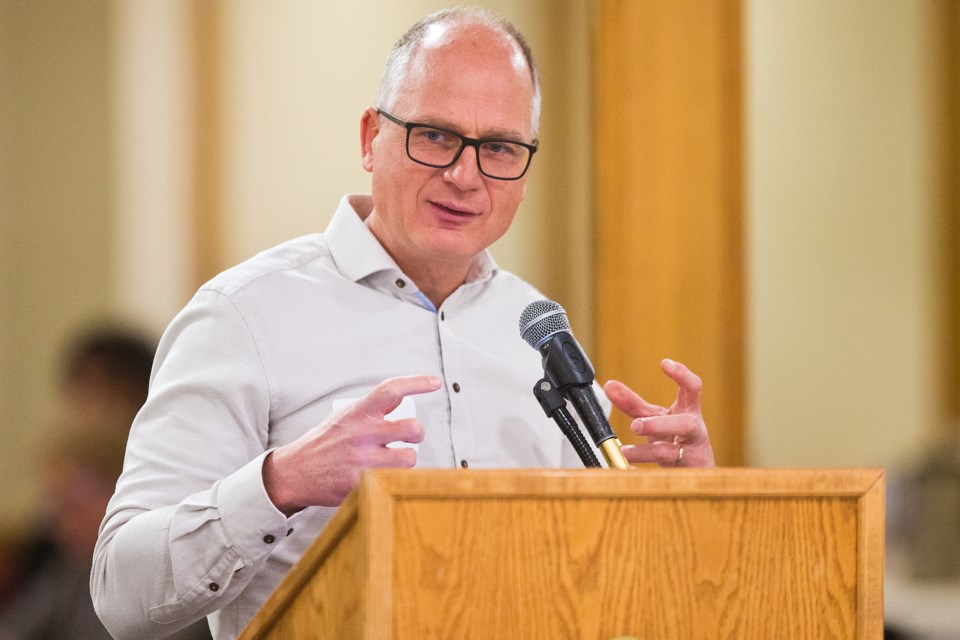 Shifting municipal utilities into a corporate structure can give municipalities the chance to be “nimble” and more creative in its menu of services, an industry expert told local leaders and business owners on Friday.

In 2003, the city and county of Grande Prairie, along with Sexsmith, amalgamated their utility assets and operations into one regional company called Aquatera, with each municipality as a shareholder that received annual dividends. Last year, Aquatera raised $3.8 million in dividends, split between shareholders.

Manz said each municipality had differing drivers for incorporating, but Grande Prairie’s was mainly related to regionalizing water and sewer services with control, along with the ability to hold utility-related debt within the corporation.

“I think one of the opportunities in creating a municipal corporation is that it can be more nimble at times than a municipality can be, and opportunity to experiment and create a neat culture,” Manz said.

The case for a corporation in St. Albert would see the city as the single shareholder, and traditional utilities ­are not included. The city already offers water, wastewater, storm water and solid waste services, but a utility corporation could offer new lines of service including waste-to-energy, consulting and garbage pickup for commercial customers.

Aside from water, Aquatera has also delved into alternative lucrative business ventures, some more successful than others. A couple of examples Manz touched on included an oil well services company in 2014 – which unfortunately coincided with the oil crash – and treating wastewater from fracking operations.

“We’ve entered into new businesses – some worked, some didn’t,” Manz said. “That’s part of the risk-taking that I think a corporation has more of an advantage in exploring than a municipality might otherwise.”

Later during a question period, Manz was asked twice about the known risks Aquatera faced before forming, but he was unable to answer.

Impact on local business was also touched on, and Manz spoke about run-ins Aquatera had with local businesses who felt Aquatera was unfairly competing with private businesses by enforcing its monopoly status on some services.

“That created a pushback from local business who felt we were unfairly competing because of our monopoly status,” Manz said. “It became certainly a bit of a balancing act we became quite conscious of over time.”

One benefit of holding utility operations in a separate corporation is all borrowing is held separately from the municipality, Manz said. Typically, municipalities have provincially mandated debt limits, and those extend to any debt on capital investments for utilities.

As a corporation, Manz said Aquatera’s borrowing is entirely separate from anything the city does.

Initially, Aquatera was run by a board almost entirely made up of local politicians, but gradually over time its governance structure changed, so as to reduce a “conflict of interest.” Now, the corporation runs entirely arms-length from its shareholder municipalities, which Manz said raised the bar on accountability and being more business-focused.

Aquatera had the “best of both worlds” in being able to function as a company, but still being eligible for the same grants municipalities have access to. Additionally, municipally-run corporations are not subject to income tax, as long as at least 90 per cent of the revenue comes from within the municipality.

Monday's public hearing is slated for 5 p.m. Late Friday afternoon, the city posted an agenda for the meeting that included a comparison of other municipal utility corporations within Alberta, as well as written public feedback the city received from residents. To see the agenda, go to "Agendas, Minutes & Videos" on the city's website.