Jenny Maier's grandmother lives at St. Albert Chartwell, and she said the 92-year-old "can hardly wait" to get the vaccine.
Jan 13, 2021 2:00 PM By: Brittany Gervais 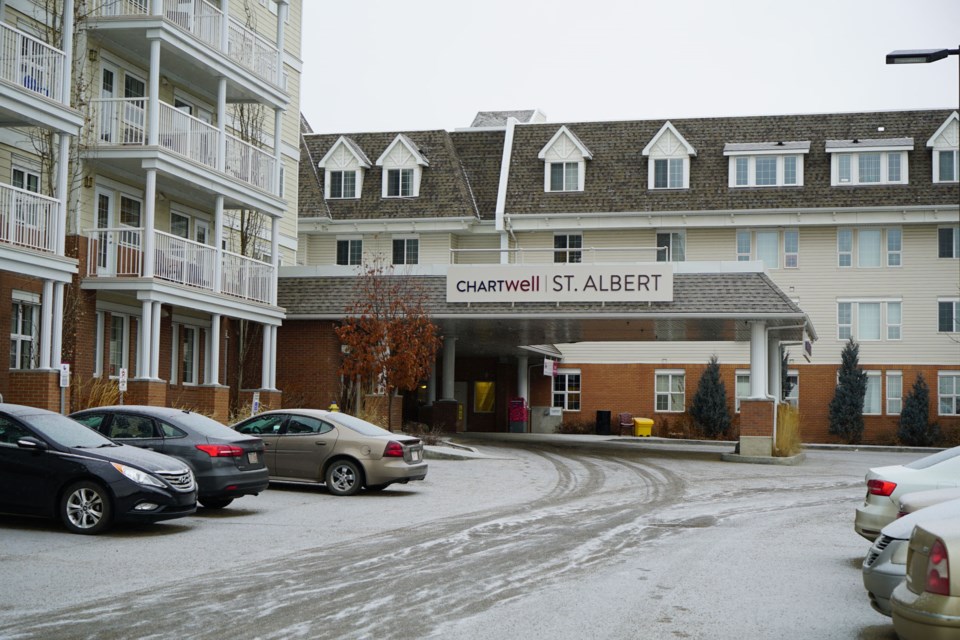 Some staff and residents at the Chartwell St. Albert Retirement Residence received vaccines Tuesday as the facility continues to battle a major outbreak of COVID-19.

On Monday, the Alberta government notified staff at the retirement home that their immunization clinic was moved up a week earlier to Jan. 12. Vaccines were offered to some staff and residents in designated supportive living suites, but not to those in personal supportive living or independent living yet, according to an email to sent to families Jan. 11 which was shared with the Gazette.

"We were told the priority is now Designated Supportive Living (DSL) and Long Term Care  residents as they have been identified as the most vulnerable sector of our population as well as there is a limited supply of the vaccine," wrote Ola McIntosh, general manager, in the email. "We can understand how this may be disappointing for some and we can only look forward to the next phase of vaccinations as directed by Alberta Health."

Immunization for these residents will be complete within three weeks before the next phase starts for those living independently or personal supportive living, McIntosh wrote. Along with vaccinations, the facility started its sixth round of asymptomatic testing for all residents and staff who have previously tested negative on Tuesday.

Jenny Maier's grandmother lives at St. Albert Chartwell, and she said the 92-year-old "can hardly wait" to get the vaccine. Maier works as a healthcare provider at the University of Alberta hospital.

She said she isn't surprised by how the outbreak has grown inside the facility – not because staff aren't doing a "really great job," but because of the nature of the virus and its spread within the community, she said.

"(Staff) really are doing like the best that they possibly can in a horrible situation," Maier said. "It's really unrealistic that (the virus) is being brought in by staff, because everyone's been in PPE for so long. It could be brought in by other residents who are going out to public places where people are not complying."

Working as a healthcare provider in the middle of a pandemic comes with its own challenges. While Maier is reminded of how serious and deadly COVID-19 is every day, she said others remain skeptical out of ignorance.

She said she believes more people would understand why following all the measures, like social distancing, staying home when sick, wearing masks and sanitizing are so important if they spent some time in her shoes.

"It's beyond frustrating, I think, because all you want to do is shake people. If you dealt with everything that we had to deal with all day, you might think differently," she said.

Sharon Ranalli, Chartwell vice-president of marketing and communications, said the operator is grateful for government decisions to place retirement and long-term care homes first in line for immunizaiton.

"We extend our gratitude to all levels of government for their expediency in making the vaccine available as a priority to retirement and long term care homes, giving hope that the fight against COVID-19 is achievable and will indeed save lives and protect our residents," Ranalli wrote in a statement to the Gazette.

During the province's regular COVID-19 update on Monday, Premier Jason Kenney called on the federal government to provide more supply of the COVID-19 vaccines, as supply was expected to run out within a week.

The next day, the federal government announced it has secured another 20 million doses of the Pfizer-BioNTech vaccine, with first deliveries expected in April.