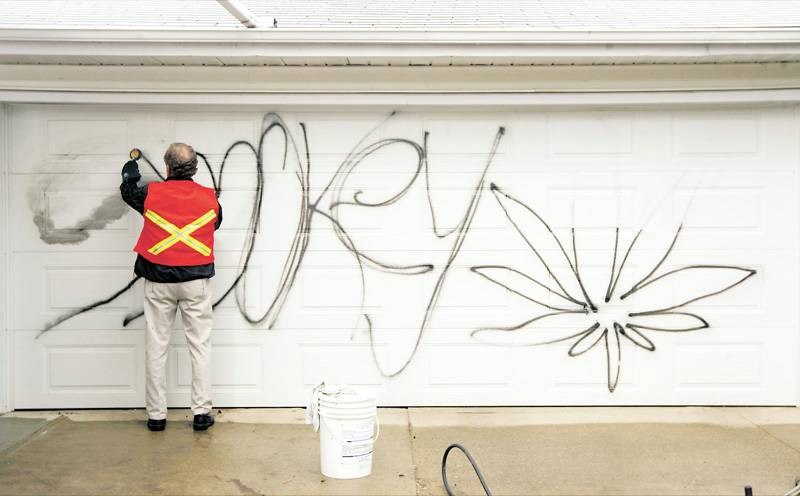 St. Albert RCMP have received five reports of vandalism that occurred in the Sturgeon subdivision last week. Don, who lives in the area around Salisbury Avenue, said he was stunned when he woke up Friday to find his garage door covered with a huge marijuana leaf and the word “smokey.”

Don, who did not want his last name published for fear of reprisal, said having the graffiti removed from his door is an expense he could do without.

“It cost me quite a bit of money to get it removed,” he said. “It was over $200 — not quite enough to go through insurance, but enough to really hit the pocketbook. It was totally senseless.”

Don believes the culprit struck the neighbourhood sometime between 1:30 and 7 a.m. on Friday morning. Even though he had a costly bill to clean up his property several neighbours got it much worse.

Don said not only is the street art unsightly and unwelcome, it is also not very good. He has no problem with graffiti as art, but believes there is a key distinction between the two.

“From my perspective there is a difference between graffiti and art and that difference is permission and he didn’t have permission to come on to my property.”

“That would be the first one for the spring that I have heard of.”

Dosko said that anyone who was a victim of this spree or any other vandalism should report it to police, because it helps them to see patterns.

“We encourage people to report. If nothing else it records it as an incident so we can track those kinds of issues.”

He said even if people just see something suspicious in their neighbourhood they should feel free to contact the RCMP so they can stop problems before they start.

“If people see or hear suspicious things in their neighbourhood by all means report.”