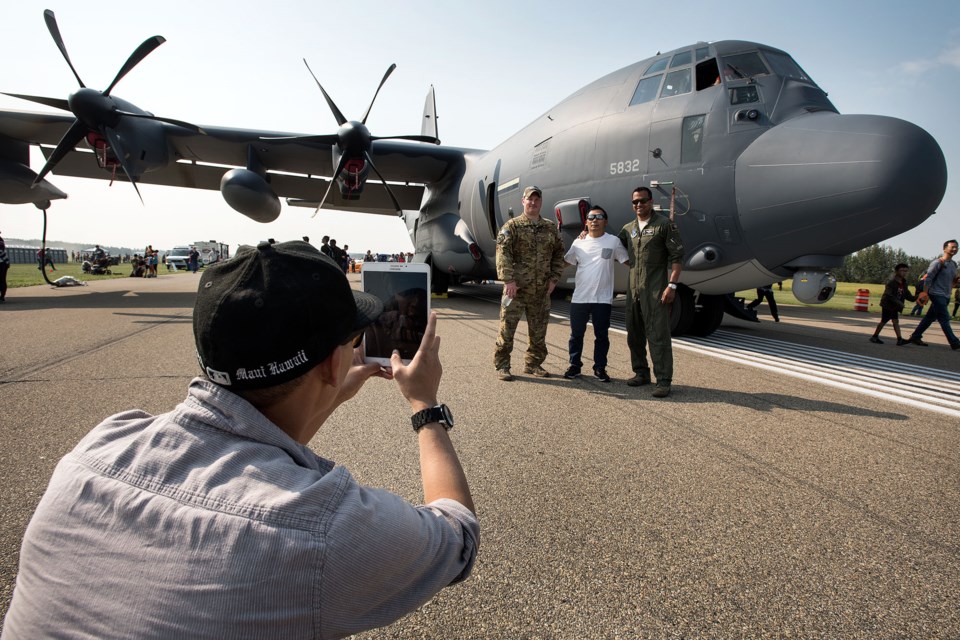 READY FOR TAKEOFF – Sturgeon County Mayor Alanna Hnatiw has called for the creation of a Villeneuve Landing Network to promote economic growth around the Villeneuve Airport. She said events like the Edmonton Airshow, shown here, could act as a draw for investment to the region. FILE PHOTO/St. Albert Gazette

Clarification
This piece originally said that the closure of Coal Mine Road meant that Sturgeon Heights students were now getting home close to 5 p.m. While this did accurately reflect Claudine Lavoie's remarks at council, she wishes to clarify that while Sturgeon Heights was affected by the closure, it was actually Marie Poburan students who were getting home at 5 because of it.

Mayor Alanna Hnatiw is leading a push to form a new group to promote economic growth around Villeneuve Airport.

“The VLN or Villeneuve Landing Network is a mechanism for sub-regional collaboration,” Hnatiw said, one that would have area governments and businesses co-operate on shared economic goals.

Hnatiw said she’s been working on bringing this organization together since she was elected, and that the county had recently held several preliminary meetings with interested groups. The time for it was ripe, as Edmonton International Airport (EIA) was working on its strategic plan for Villeneuve Airport and the county was poised to revisit the Villeneuve area structure plan in the near future.

Villeneuve Airport is an important but underdeveloped regional asset, Hnatiw said. If local partners spoke with one voice when promoting this area to the world, they could draw more investment, create jobs in manufacturing and flight training, and encourage more student interest in science and engineering.

Hnatiw said a long list of parties have been invited to join or have expressed an interest in this group, including the City of St. Albert, Town of Morinville, Enoch, Alexander, the St. Albert and District Chamber of Commerce and EIA.

Edmonton Airshow president Richard Skermer said he’s been pushing for a group like this for the last seven years to promote regional development and was very interested in joining it.

“From Morinville down to Nisku you have all these assets,” he said, including Villeneuve Airport, the Pro North and Acheson industrial parks, highways and rail lines.

“If you start combining all those assets together you get this immense potential to access the world.”

Skermer said the Edmonton Airshow could act as a draw to get potential investors into this region. Those investors will want to know the best place to set up shop, regardless of who governs that spot.

“If someone comes in and sees we’re not speaking with one regional voice, they get discouraged,” he said.

In an email, St. Albert Mayor Cathy Heron said St. Albert has always been excited about development at Villeneuve Airport and would like to support any plan to do so, adding that council would have to get back from summer break before it could sign any deals.

“I applaud Mayor Hnatiw on bringing these parties together.”

Hnatiw said she had a draft memorandum of agreement she would now share with interested partners. Partners would meet over the next few months to determine the group's goals, membership, organizational structure, and relationship with Edmonton Global, which has a similar mandate for regional economic development. She hoped to get the group off the ground in a year.

Questions on the Villeneuve Landing Network should go to Hnatiw at [email protected].

A Sturgeon Valley resident wants St. Albert and Sturgeon leaders to sort out transportation snarls caused by the partial closure of Coal Mine Road.

Sturgeon Valley resident Claudine Lavoie spoke to county council July 9 about traffic problems caused by St. Albert’s closure of part of Coal Mine Road. She brought with her a petition signed by about 140 area residents who shared her concerns.

Coal Mine Road was one of the main roads connecting the Sturgeon Valley to St. Albert until St. Albert council voted last January to close the part of it that connected to Eastgate Way North.

In council and in a later interview, Lavoie said this decision has restricted access to stores, schools and hospitals for thousands of Sturgeon Valley residents. Residents report long detours along rough, flooded gravel roads such as Township Road 544 and dangerous left-hand turns onto Hwy. 2 since the closure, and students from Marie Poburan coming home close to 5 p.m. due to extra-long bus routes.

Lavoie called on council to use the current annexation talks with St. Albert to solve this transportation problem. She suggested either having the county pave Twp. 544 and working with Alberta Transportation to put lights at Hwy. 2 or getting St. Albert to build the proposed Neil Ross Road.

“We just want them to get on with it and fix this problem that’s there,” she said.

Hnatiw said in council that this road issue would be part of the county’s annexation talks with St. Albert. Paving Twp. 544 would simply direct more drivers to an unsafe uncontrolled left-hand turn onto Hwy. 2 unless the province also put in traffic lights there, and the province had no interest in installing lights.

“The City of St. Albert, the province and the county need to collaborate on what we can do to manage traffic in that area,” she said in an interview.