Voters flock to the polls on election day

One election polling volunteer says she has never seen such a big voter turnout in the four elections she has worked in the past.
0
Apr 16, 2019 3:50 PM By: Jennifer Henderson 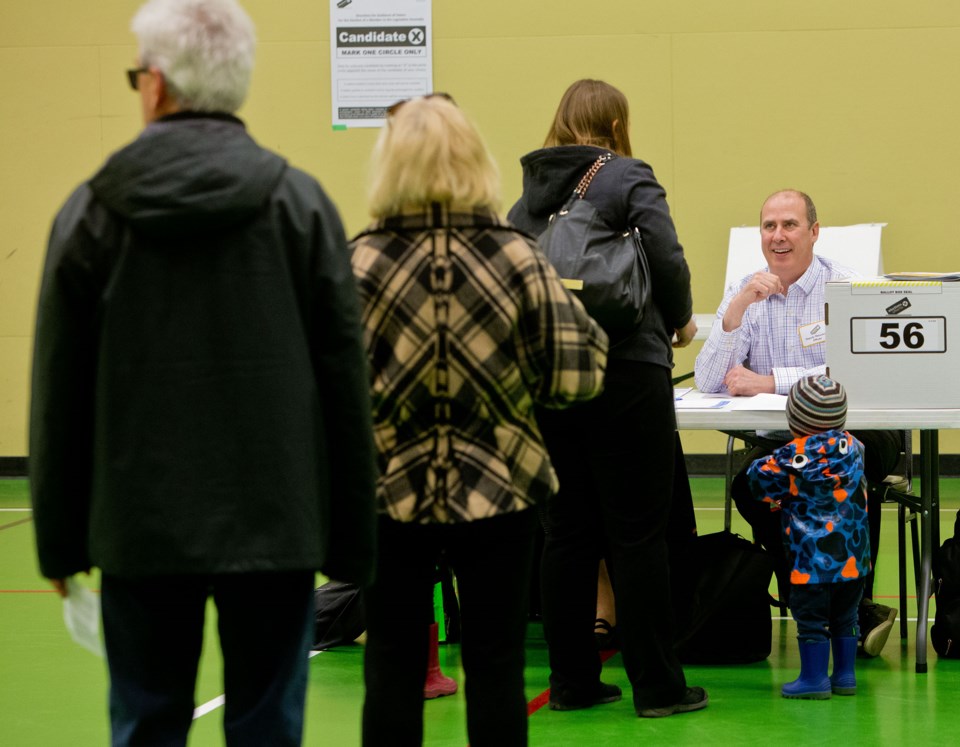 Residents line up to register to vote with a Deputy Returning Officer at the Red Willow Community Church on Tuesday. CHRIS COLBOURNE/St. Albert Gazette

One election polling volunteer says she has never seen such a big voter turnout in the four elections she has worked in the past.

Diane IsRalson said she saw big crowds come out to vote on Tuesday morning, with a wide array of people dropping by to exercise their civic right. Bustling polling stations and generally friendly moods prevailed as St. Albertans turned out to choose Alberta's next provincial government.

“It’s very busy and we are getting a whole stream of people who have just turned 18 to all ages. It's been a steady process,” IsRalson said.

IsRalson said she was happy to see so many young voters exercising their right to vote.

Robert Putts is one of those young voters. Putts is a 19-year-old St. Albertan voting in his very first election.

The first-time voter just graduated high school last year. The biggest issue for him this election is education.

“Going back to 50 per cent (weighted) diploma exams just didn’t seem smart to me. I was the generation where it just switched to 30 (per cent),” Putts said, referencing a policy suggestion rolled out by the UCP.

“It’s just that stress, taking it off the kids, helps them succeed,” Putts said.

Putts said all through school, the importance of voting was reinforced. He heard so much about poor voter turnout in youth that he was determined to come to the polls to have his say.

Kenzie McMartin, 22, is also a young voter hitting the polls wanting to make her voice heard this year in the provincial election.

McMartin said many of her friends are excited to vote this year.

“We discuss how a lot of our political views might not be the same as our parents and our parents are all going to vote so I think a lot of people my age are and hopefully going to,” McMartin said.

For the 22-year-old, the biggest issue in the provincial election is the environment.

“Environmental concerns are big for me, and in Alberta a pretty big issue and a big talking point,” McMartin said.

Another voter, Cole Rochat, also listed social and environmental issues as the most important factors deciding his vote this year, but recognizes that many people may be voting on the economy.

“My issues aren’t everyone’s biggest issues. This is the economy election and I find a little bit socially driven and environmentally driven,” Rochat said.

Pravarni Rowley told the Gazette she hopes her vote will have a positive impact on her future.

“Everything that happens today affects me, impacts my future and the future (of) my family and loved ones and friends. This is why I'm here,” Rowley said.

Terence Rowley said its important for people to vote, even if they don’t share the same political views as him.

"Even the people who don’t vote for who we want them to vote for, it's good that they came out,” Terence said.

Terence said pipelines are one of the biggest issues for him this election and he and Pravarni both felt NDP leader Rachel Notley had handled the portfolio very well.

“The economy has not been the greatest, but it was terrible when she took over four years ago,” Terence said.

“She inherited a very bad economy. She’s managed to keep it and maintain it,” Pravarni added.

Michael Wagener, supervising deputy returning officer at one of the polling stations, said the day had been very busy with voters coming out but things had been running very smoothly.

The returning officer said the volunteers had been working hard all day to ensure the process was running smoothly and efficiently.

Wagener said the mood at the polling stations had been good all morning.