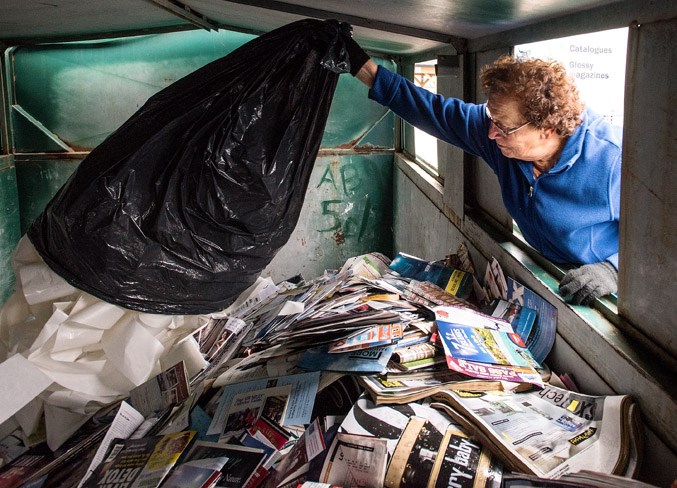 POTENTIAL GOLD MINE? — Julie Boucher of Legal brings her recyclables to the Campbell Park recycle depot in St. Albert on Oct 13. St. Albert is studying ways to make use of such recyclables locally instead of having contractors sell them overseas.

Every day, thousands of used tires roll into the muddy Eco-Flex/Liberty Tire lot just west of Legal off Highway 2, creating mountains of waste.

And every day, thousands of those tires roll right back off the lot, reborn as recycled rubber bricks, mats, and sidewalks.

This facility collects tires from across Alberta, said Eco-Flex president Alan Champagne, including Fort McMurray, which is where many of his products end up.

“We’ve got them in India, Russia, South America and all over the States,” he said of his products, and he’s opening new plants in Russia and the U.S. He’s selling millions worth of recycled goods each year, creating local jobs and reducing landfill waste and pollution.

St. Albert has everything it needs to attract a similar company, he added: the region has lots of waste rubber, plenty of people, and good transportation.

“If I were moving in from scratch, that would definitely be an area I’d consider.”

Champagne is one of a growing number of entrepreneurs who have tapped into circular economy – a new school of economic thought that aims to turn waste into wealth. It’s an economic wave that St. Albert is hoping to ride through its alternative servicing and waste minimization plan, and the Gazette is giving it a closer look as part of Waste Reduction Week.

The circular economy is a relatively new concept promoted by groups such as the Ellen MacArthur Foundation that sees waste reduction as a business model.

At its core is the idea that our current economy is linear and wasteful: we take finite resources, make stuff from them, and discard waste. This strands valuable material in the dump and puts economies at risk of commodity shortages, price spikes, and environmental regulations, reports the London (U.K.) Waste and Recycling Board.

A circular approach aims to keep products, components and materials at their highest use and value at all times. In addition to recycling, this includes concepts such as better product design (e.g. making goods that can be easily repaired), the sharing economy (borrowing a drill from a tool library instead of buying it), and products as services (leasing lights instead of buying them), said Christina Seidel of the Recycling Council of Alberta.

Britain is something of a pioneer in this field. Its FoodSave project saw 170 businesses divert 1,291 tonnes of food waste a year from the landfill through waste reduction and donations and save some £550,000 in two years, for example, while its online company, Globechain, connects thousands of groups to divert unwanted goods to those who need them, reports the London Waste and Recycling Board.

St. Albert currently spends about $6.7 million a year on solid waste management, the city’s budget reports. In the process, we’re giving away thousands of tonnes of sellable material and spending more on new stuff to replace it.

A circular approach would see St. Albert tap that waste to reduce costs and create jobs, said city manager Kevin Scoble. If we pre-sorted our plastic waste, for example, we could create a supply of clean materials to sell to a plastic lumber company. Likewise, we could run some or all of our waste through a gasifier, producing energy that could heat homes or businesses, and glass, metal, and ash that we could sell to manufacturers or use to build roads.

“The environment doesn’t cost you money. It saves you money or makes you money,” Scoble said.

Eco-Flex stumbled into it back in 1992, when it set out to make mattresses for cows, Champagne reports.

“We never got into this business saying we wanted to be a tire recycler,” he said, but crumb rubber turned out to be the ideal stuffing for their cow cushions.

Eco-Flex’s sister company Liberty Tire collects used tires from across the province and trucks them to the Legal yard, said maintenance manager Darcy Ridard. The environmental fee you pay for new tires funds this transportation.

Crews use backhoes equipped with pincers to sort the tires into mountainous piles. The tires go through a big blue machine full of magnets, sieves, conveyor belts, and thick, pallet-sized saw blades to chop them into chunks. Some of those chunks are used in landfill construction, while others get ground down until they resemble Oreo cookie crumbs, Ridard said. About 80 per cent of that crumb heads to the Eco-Flex plant next door.

Eco-Flex crews mix the crumb with colours and adhesives, spread them in huge moulds, and squish them for about half an hour in giant presses to produce bricks, mats, sound barriers, and other products, Champagne said.

By recycling, Liberty Tire and Eco-Flex keep millions of tires out of landfills and incinerators, and employ some 150 people, Champagne said. They also produce products that have about half the cost, a third the carbon footprint, and a fraction of the weight of their concrete equivalents.

Instead of digging new gravel from a mine and trucking it to a site, Lafarge is now sending crushers to collection points in Morinville and Villeneuve to turn old sidewalks into aggregate, said Bill Gowdy, the company’s environment and public affairs manager.

“We actually prefer it,” he said of recycled gravel, and they’re hoping to quadruple their use of it by 2030.

Recycled gravel is in many cases superior to the round alluvial rock you get from local pits, Gowdy explained. Its rough, angular edges lock together and make roads less prone to ruts, and you don’t have to haul it all the way from the pit, which makes it cheaper and less carbon-intensive. It also keeps more gravel in Lafarge’s mines, saving them the cost of digging new pits.

“From a business perspective, it makes sense,” Gowdy said.

Just south of town, Enerkem has built a roughly $200-million facility that can turn up to 100,000 tonnes of Edmonton waste into 40 million litres of ethanol a year.

“What we take is what we call the ultimate waste,” said Enerkem spokesperson Pierre Boisseau – all those materials that aren’t currently considered recyclable.

That waste is now becoming fuel for cars, displacing fossil fuels and reducing greenhouse gases by about 60 per cent, Boisseau said. Edmonton advances its waste reduction goals, and Enerkem makes a profit.

Last year, the London Waste and Recycling Board set out a multi-year Circular Economy Route Map that would use public policy, support programs, government procurement, education, collaboration, finance and more to slash waste and foster green businesses. If it works, it could earn that city £7 billion a year and 12,000 net new jobs by 2036.

The circular economy is so new that there aren’t many examples out there of how to do it right, Seidel said. She and other circular economy advocates reached by the Gazette agreed that you need at least two things to succeed: a reliable supply of waste material and a market for your products.

Making stuff out of waste isn’t always a ticket to wealth, Champagne said – your product still has to fulfil a need, and it still has to be better than the alternative.

Scoble said the city was considering a broad range of options. One idea was for the city to set up a green utilities centre that would sort or process waste (possibly through a materials recovery centre or a waste-to-energy gasifier), treat local wastewater and tap the sun for electricity to provide an industrial park with cheap, green heat, electricity, non-potable water and recyclable materials, lowering their costs.

City council would get a report on these ideas this March, Scoble said.