Web art market to the rescue

Local painter Doris Charest and New Zealand web developer Connor Finlayson came together to build something more than a directory of Alberta artists: they're hoping to build up the artists themselves into having a better online presence and better bottomlines too.
Sep 7, 2020 8:00 AM By: Scott Hayes 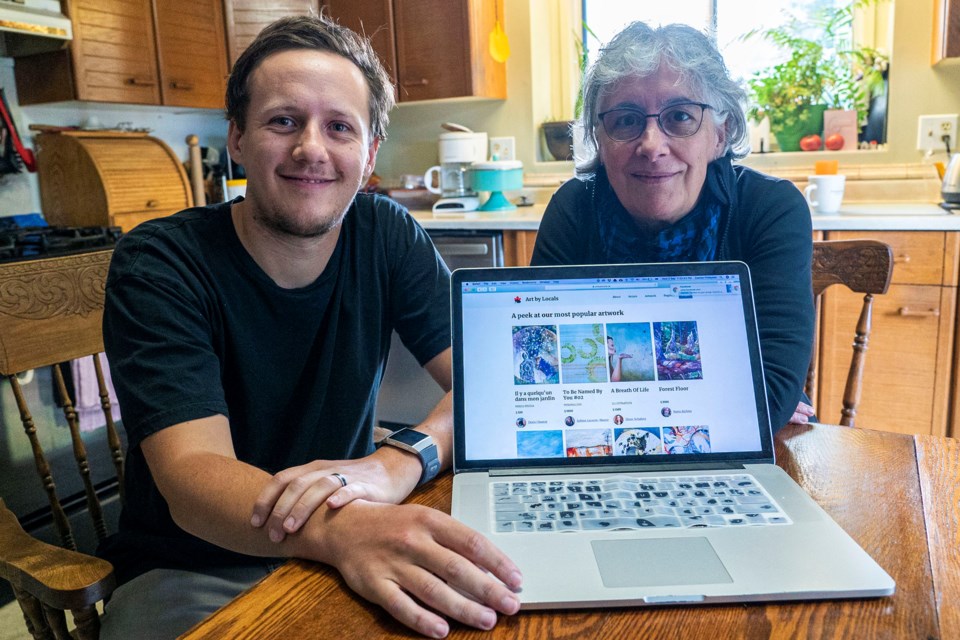 Doris Charest of St. Albert is a local painter while Connor Finlayson is a web designer from New Zealand. The two have created a website called ArtByLocals.ca to help area artists get web presence and promote their works and themselves. CHRIS COLBOURNE/St. Albert Gazette

Visual artists are often told ‘get thee to the Internet’ in order to be more visible and accessible to the public (i.e. sell more paintings). The task of starting up one’s own website is a daunting one at the best of times, however, because of the techno-learning curve. It also tends to go against many painters’ shyness about shameless self-promotion. Alas, the world is filled with such cruel ironies: buy my work but leave me alone.

COVID-19, being the public health curse that it is, also stubbed many artists’ toes by slamming the doors on all of their fave non-WWW places where paintings could physically be hung with little round pricetag stickers for art aficionados to peruse.

“The galleries were closed. We couldn't have our art shows. We couldn't even retrieve our artwork that was in galleries. We lost all our teaching gigs, our presentations, everything,” said St. Albert artist Doris Charest as she pondered the pandemic problem with her artist friends, with a not insubstantial degree of commiseration.

Enter Connor Finlayson, a New Zealand native in Canada. There, he started a website called Unicorn Factory as a one-stop webshop of savvy design, digital marketing and software freelancers.

Here, he heard the cries and saw Charest’s closed doors as a huge window of opportunity. That, plus it was basically the same concept as his previous effort. Think of a phone book but not the ones printed on paper.

“When I finished university, I wanted to start my first little business but I was struggling to make money off that business. The way that I was making money to pay rent and all that kind of stuff was by just helping small local businesses with their websites or their online marketing, but it was quite difficult at the start to find clients,” he related.

“What I realized was that there was no real place where local businesses could go and find locals to work with. I just decided to build this website and initially, it just had me on there and some of my friends: some of them were freelancing, others weren't, but I figured it would be good to have more than two people on there. Over time, we just started having more and more businesses using it, and then it evolved into what it is now. We have about 500 people based in New Zealand on the website and we have thousands of businesses that use it on a regular basis.”

Using the ‘Unicorn’ model, the art marketplace called ArtByLocals.ca went live last week with a few dozen artists and a modest selection of works by each. There are art categories to search through and each artist gets their own profile, which can link to their own websites, if such a thing exists. It’s firmly based in Alberta and contains enough prominent Edmonton and St. Albert-area artists’ names to make its more precise home obvious, but ArtByLocals strives to encapsulate all of Alberta, nay Canada.

The concept isn’t necessarily new and others have certainly tried it before. A project called Alberta Artography (started up by a Jasper-based organization called IOTAD in 2008) had much the same philosophy, though it focused mostly on producing a comprehensive traveller’s guide to all artists’ studios across the province. With funding hiccups along the way to fight against, it still exists primarily as a Facebook page where new events and other notices get posted.

ArtByLocals doesn’t have to worry about funding: a membership doesn’t cost anything.

“At the moment, it's free but we're hoping that people subscribe. If you subscribe, what happens is you will be featured on the front page and then in the future, you'll have access to different videos, special sponsorship when we do our advertising on Facebook or Instagram or elsewhere,” Charest noted.

“In the first week, the goal was just to get some artists to sign up,” Finlayson continued, “but soon what we're going to be doing is we'll be advertising it through different channels. I think that there will be a lot of people out there who are keen to support the local art thing.”

It also does solve that daunting prospect by paving the way for those shy artists to get digital. If they have websites already, ArtByLocals can link to them on each artist's profile.

"If you're a painter that doesn't paint 200 works a year and creates only 10, it's almost not worth it to have a website but something like this would be good for them because at least they'd have a place to send people to look at their artwork online," Charest added.

“It caters to everybody, but I think that it's like a little niche that it might help people too. We're just hoping that local people help local artists and just shop local.”