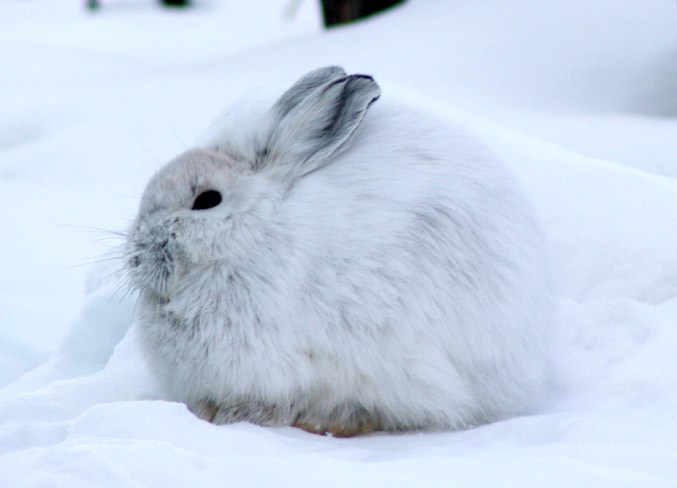 I LIKE CHICKEN – A common snowshoe hare. University of Alberta researchers have discovered that snowshoe hares will readily eat scavenged meat, and feathers, during the winter, likely as a way to get protein.

Those snowshoe hares in your backyard might get a hankerin’ for meat and feathers come winter, suggests a recent University of Alberta report.

PhD student Michael Peers and his team at the University of Alberta published a study on meat-eating snowshoe hares last month in Northwestern Naturalist.

While there have been anecdotal reports that snowshoe hares scavenged meat, researchers have yet to formally study this part of their diet.

Snowshoe hares are the smaller, shorter-eared counterparts of the white-tailed jackrabbits seen in urban areas like St. Albert.

Peers said he was up in the Yukon studying the hares when he and his colleagues decided to see what scavengers were around just for fun. They threw down some carcasses, set up motion-triggered cameras, and waited.

To their surprise, they found snowshoe hares were frequent customers, dining at 12.4 per cent of the carcasses they deployed from 2015 to 2017. They weren’t picky eaters either, as they ate grouse, loon, snowshoe hare and lynx – the latter of which was kind of funny, as the lynx is the hare’s main predator, Peers said.

On at least two occasions, the team spotted a hare intentionally eating feathers from a spruce grouse corpse. The team noted this was likely the first time such behaviour has ever been spotted in this species.

The team found that the hares were much more likely to scavenge carcasses in the winter and didn’t eat any from May to August, which is when plants are plentiful. This suggests the hares turn to meat due to winter food shortages, likely as a source of protein.

“Feathers are pretty high in protein content,” Peers noted, which could explain why that one hare ate them.

The team concluded snowshoe hares were likely regular scavengers of meat in the winter and weren’t particular about what they ate.

U of A biologist Stan Boutin, who was involved in the study, said there are many herbivores that occasionally dine on meat. Red squirrels will raid nests and kill baby bunnies, for example, while ground squirrels will eat their road-killed cousins.

Peers said his team was continuing to study the scavenging community up north and said it would be interesting to see if this hare phenomenon was widespread.

Evolutionary ecologist Jelmer Samplonius co-authored a study this week in Current Biology on how climate change affects clashes between great tits and pied flycatchers in Europe.

Great tits live year-round in the Netherlands but compete for nest space with migratory flycatchers, Samplonius said in an email interview. While the flycatchers have the speed advantage outside a nest box, the strength, weight and claws of the tit give it the edge indoors, causing them to bash their opponents’ heads in and eat their brains.

Samplonius said he noticed that up to 10 per cent of male flycatchers would die in great tit nests in some years and virtually none in others. Knowing both species competed for the same food source (caterpillars, the peak of which had shifted earlier in the year due to climate warming), he theorized climate change could be an explanation.

Samplonius and his team tracked tit and flycatcher arrival and egg-laying times at 950 nest boxes from 2007 to 2016 and compared them to temperature and beech nut density (which affects tit survival).

The team found that warmer winters (which are more likely due to climate change) resulted in more tit survival, more conflict and more dead flycatchers. They also found flycatchers had moved up their migration times in general, possibly due to warming, but did not change their arrival time to reflect temperatures in Europe. That meant less conflict during warm springs, as they’d arrive after the tits had nested, but more in cold ones.

Surprisingly, the team found that these trends were not affecting flycatcher populations – most of the slain birds were late-arriving males that would not have bred anyway. This could change if the tits continue to chip away at this buffer of non-breeders, though.

Samplonius said this was the first study he knew of to examine the effects of climate change on interspecies conflict.