What do I do with my glass jars now? 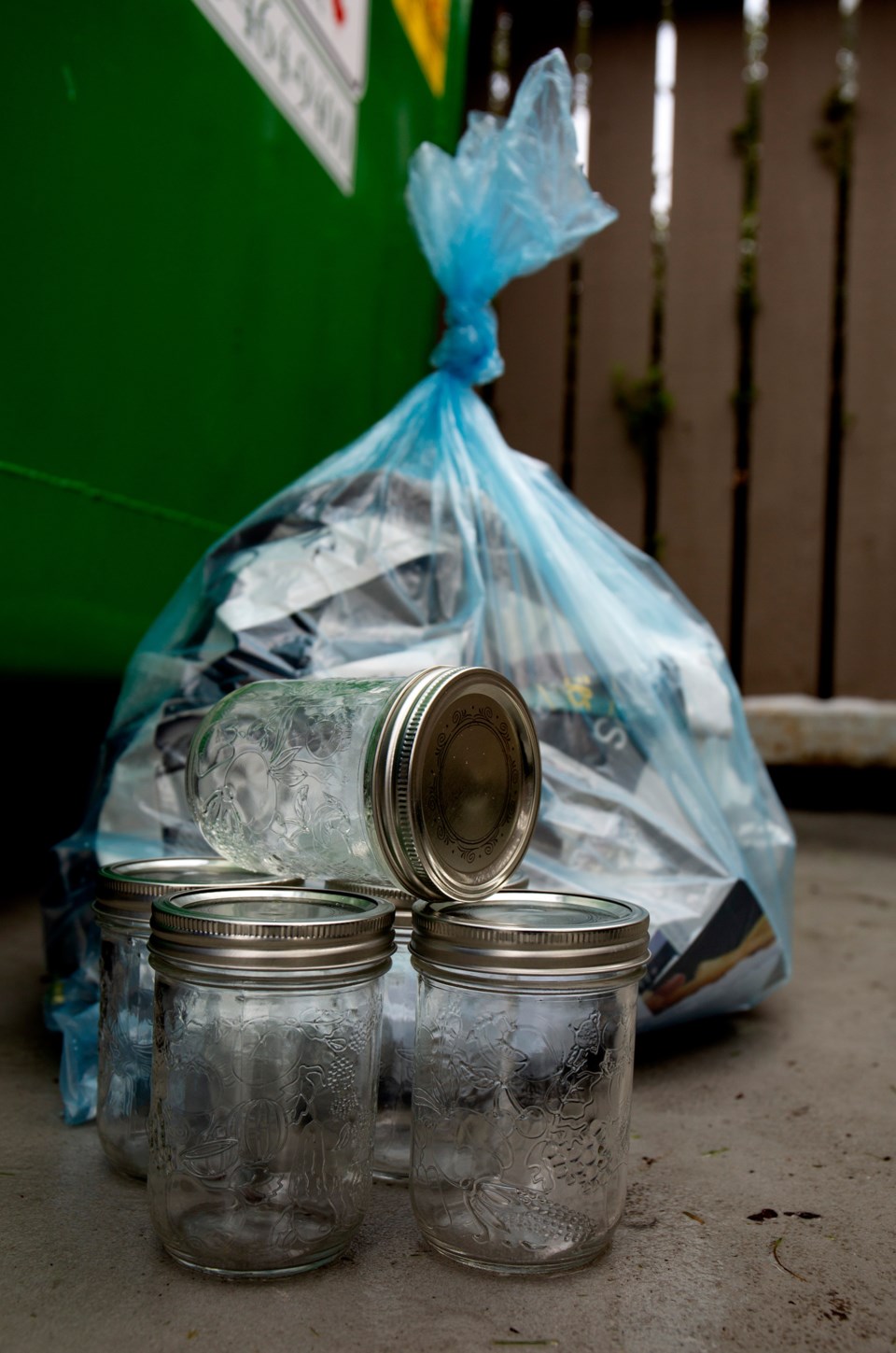 KICKED TO THE CURB – The city is proposing changes to its blue bag recycling program that, if approved, would ban glass jars and plastic clamshell containers from blue bags.

St. Albert residents will have to get creative if they want to keep their glass jars and one-use cups out of the landfill once new changes to the city’s blue bag system kick in this fall, waste reduction experts say.

The city has yet to decide whether or not glass bottles and jars will still be accepted at the recycling depot,  city spokesperson Cory Sinclair said.

City waste diversion program supervisor Olivia Kwok told councillors that these changes were necessary to meet the new requirements for recyclables set by China and other overseas processors, and could mean more trash and less waste diversion in St. Albert.

“We want to be able to sell and market these products,” Kwok said. “If they’re not clean and they’re contaminated, unfortunately, they can’t be recycled.”

Strathcona County brought in blue bag changes similar to the ones St. Albert has proposed last Sept. 10, said Leah Seabrook, manager of Strathcona’s waste management department. The county still accepts glass jars at its recycling depots, and preceded the changes with several months of public education. As of this week, they were rejecting about one in six blue bags due to improper materials.

This situation was sparked by changes brought in last January by China, Seabrook said. Last year, China was willing to accept up to five per cent contamination in imported recyclables – contamination meaning anything from pudding on a pudding cup to a chunk of glass in a bale of paper. Now, they’ve upped their standards to less than 0.5 per cent. That means that even one plastic coffee cup in the wrong bale could send the whole mess to the dump.

“It’s drastically changed how we could package our material,” Seabrook said.

China is the lead importer of recyclables, and North America isn’t currently set up to meet its new standards, said Christina Seidel, executive director of the Recycling Council of Alberta.

“We really should have seen this coming,” she said, noting that there’s been a growing glut of these materials on the market for years.

“We have not done a good job of keeping our materials properly separated.”

Glass is a problem in blue bags because it’s tough to separate from other materials once it breaks, Seidel said. Take it clean and whole to a bottle depot, and you can easily collect it. Many communities have switched to glass at depots only in wake of China’s changes. Global markets for glass are lousy, but Canada has started finding domestic uses for it, such as in road fill or sandblasting.

Hard plastics like those in pop bottles are uniform and easy to market, Seabrook said. The ones in to-go cups are often mixes of plastic covered in other wastes, so they’re a tough sell.

Glass makes up about three per cent of residential waste, Alberta Environment estimates. There’s not a lot of it in stores, and not a lot of good alternatives to it, Seidel said.

Fortunately, glass jars are easy to reuse, said Kristin Arnot of Edmonton’s Reuse Centre. In addition to putting preserves or other dry goods in them, some people use them as vases, candles or terrariums.

Plastics make up about seven per cent of residential waste, Alberta Environment estimates.

It’s tough to avoid single-use plastics as they’re often the only form of packaging available, Seabrook said. Strathcona County is lobbying the province to introduce extended producer responsibility legislation that would require manufacturers to set up systems to handle these plastics. Seidel said B.C. has done so, and now has a high-tech sorting plant that can process these materials.

With plastics, it's best to start by reducing your consumption of these items first, Arnot said – buy a hard plastic yogurt tub instead of a one-use cup, for example, and scoop what you need into a Tupperware container. To-go cups can also hold screws and other loose items once cleaned and mounted.

Waste-to-energy systems are not a long-term solution, as they are a form of disposal, Seidel said. All these materials can be reused, recycled and marketed – they just have to be properly sorted, and our current blue bag systems aren’t set up to do so.

“We can’t just dispose of these materials. We need to get better at managing them.”