“Where are our stolen sisters?” 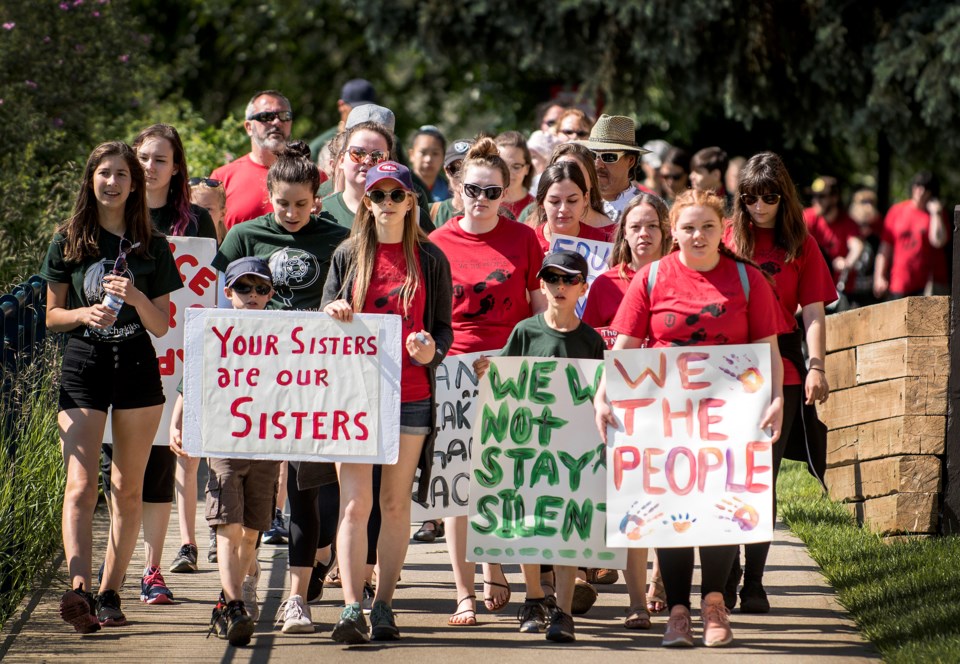 Dozens of people participate in the walk to honour missing and murdered Indigenous women along Red Willow Trail in St. Albert on June 23, 2019. Holding the "We the People" sign is walk founder Hannah Nash.

To this day, no one’s sure what happened to Amber Alyssa Tuccaro.

A mother and a member of the Misikew Cree First Nation, she was last seen in Nisku in 2010, said April Eve Wiberg, who held a picture of her Sunday in Lions Park. Her remains turned up in that area two years later – she was the victim of what police suspect may be a serial killer.

Tuccaro is one of the thousands of Indigenous women who have gone missing or been murdered in Canada in recent years, said Wiberg, an advocate with the Stolen Sisters and Brothers Awareness Movement.

“There are literally thousands of families across the country that are in mourning,” she said, their relatives the victims of a national epidemic of violence against Indigenous women.

A walk for the missing

Wiberg was one of about 70 people who were at Lions Park Sunday for the second annual St. Albert missing and murdered Indigenous women’s walk. The walk was part of Sunday’s National Indigenous Peoples Day celebration in St. Albert.

Paul Kane student Hannah Nash said she founded this walk last year to draw attention to Canada’s missing and murdered Indigenous women. This year’s walk was particularly significant as it coincided with the release of the final report of the National Inquiry into Missing and Murdered Indigenous Women and Girls.

Walk participants set out from the park at 10:30 a.m., proceeded past the Healing Garden and across the St. Albert Trail Bridge before returning to St. Albert Place to raise the Métis flag with St. Albert Mayor Cathy Heron.

Many wore red shirts, invoking the red dresses that have come to symbolize Canada’s scores of dead or disappeared Indigenous women. Some bore signs with messages that asked, “Where are our stolen sisters?” and showed portraits of the missing.

It also found that this violence had its roots in racist colonial policies such as the residential schools (which devalued women and enforced homophobia), Indian Act (which tied a woman’s Indian status to her husband) and forced sterilizations. These and other policies made it more likely for Indigenous women to get into situations of poverty and violence and less likely for authorities to protect them from it.

Families consistently find themselves brushed off when they report a missing Indigenous person, Wiberg said. When the missing turn up dead, the victim-blaming starts: “They put themselves in that position,” or “They chose that lifestyle.”

“What message does that send? That it’s okay to murder and exploit and harm Indigenous people?” she asked.

The inquiry found violence against Indigenous women was embedded into everyday life through laws, politics, institutions and interpersonal relations. Many women live in constant fear as a result.

“They’re scared to walk the streets even in the day and to stand up (for themselves) because there’s a chance (they) might be targeted,” Nash said.

The inquiry found this normalization of violence coupled with Canada’s appalling apathy toward addressing it amounted to genocide.

Nash noted the inquiry has called on all Canadians to help stop this violence by confronting racism, sexism, ignorance, homophobia and transphobia whenever they see it.

“We need to stand up and speak out against racism.”