The wild side of Wild Rose School 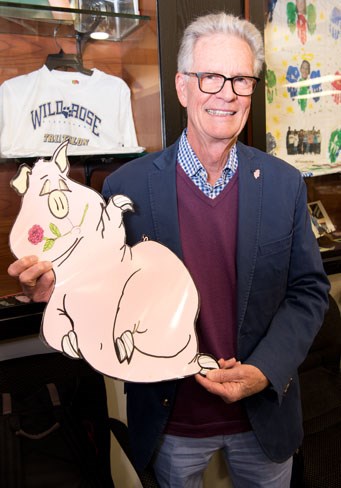 WILD ROSIE — Former Wild Rose Elementary principal Garry Phillips holds a copy of Wild Rosie, the school's unofficial staff mascot for many years. (Note the Wild Rosie pin on his lapel.) The cartoon pig is one of the many surprising facts about the Grandin-area school people can learn at a new history exhibit on the school that opened last Thursday at the St. Albert Public Schools district office.

Have you met Wild Rosie? Wild Rosie the pig started out as an in-joke/mascot amongst the staff at Wild Rose Elementary, said Garry Phillips, its first vice-principal. “We were the Wild Rosies, so we thought Rosie sounded like a good name for a pig,” he explained. There was never an actual Wild Rosie pig, but staffers did dress up as pigs on occasion, Phillips said. The pink dancing pig stuck around until well into the 1990s, said Erika Krempien, a 23-year teacher at the school. “The staff has always referred to themselves as the Rosies,” she said, although the school’s actual mascot has changed several times. Wild Rosie is one of the many strange facts about Wild Rose Elementary on display at a new history exhibit on the school at the St. Albert Public School district office. About 50 teachers and administrators were at the exhibit’s opening last Thursday to reminisce over shirts, Frisbees, pictures and newspaper clippings from the school’s 39-year history. The exhibit is part of an ongoing series by the Historical Foundation of School District 6 that seeks to document the history of the public board’s schools, said foundation chairperson Joan Trettler.

Wild Rose opened Sept. 5, 1978 to address a space crunch in the Grandin region, Phillips said. It had just 280 students, and was surrounded by thick forest. Its size brought staff, students and neighbours close together, creating a family-like atmosphere. Phillips said he was surprised by how small the school was, having come from the much-bigger Sir Alexander Mackenzie, and impressed by its massive stage. “I thought maybe they were going to be the next fine arts school in the district.” Phillips joked that the school also had the district’s first “climbing wall” in the form of a corrugated wall that students would scale to get onto the roof. The school didn’t have the money for a fully stocked library when it opened, said Pat Babiuk, who was one of the school’s first teachers. “There were more students than library books,” she said, and a lot of empty shelf space. Teachers had to bring their own books to ensure students had ones for lessons, Babiuk said. Eventually, a parent solved the problem by donating thousands of dollars to the library. The then-Protestant board held a contest to name the new school, the winner of which was James MacDonald, a Grade 5 student at W.D. Cuts that lived on the same street as Phillips. Babiuk said MacDonald was inspired by the sight of wild roses that grew around a pond/slough behind the school. Residents soon deemed the pond a safety hazard and had it – and the roses – removed. Perhaps in the spirit of Wild Rosie, staff at the school became notorious for playing practical jokes on each other. Phillips said he came to school on his 40th birthday to see a man in an executioner’s hood with a fake axe next to a portable sign that said “40 year-old fossil on display / Happy birthday Mr. Phillips,” for example. Staff would also hold spring equinox pajama parties and once organized a fancy-dress high tea to prove they were better dressers than people at Robert Rundle. The school went through several official mascots, said Krempien and Babiuk. The first, the Wild Rose Wonderkid, was a sort of flower with legs. Students voted to switch to a chameleon in 1995, which was dropped in favour of a wolf named Rosie in 1999. Staff also took on unique initiatives such as the district’s first elementary school triathlon and a youth golf pilot project, Trettler said. Wild Rose is still one big family to this day where everyone knows everyone else, Krempien said. “It seems like once people start teaching at Wild Rose, they don’t want to leave.”