Yes, that was a goat on a leash 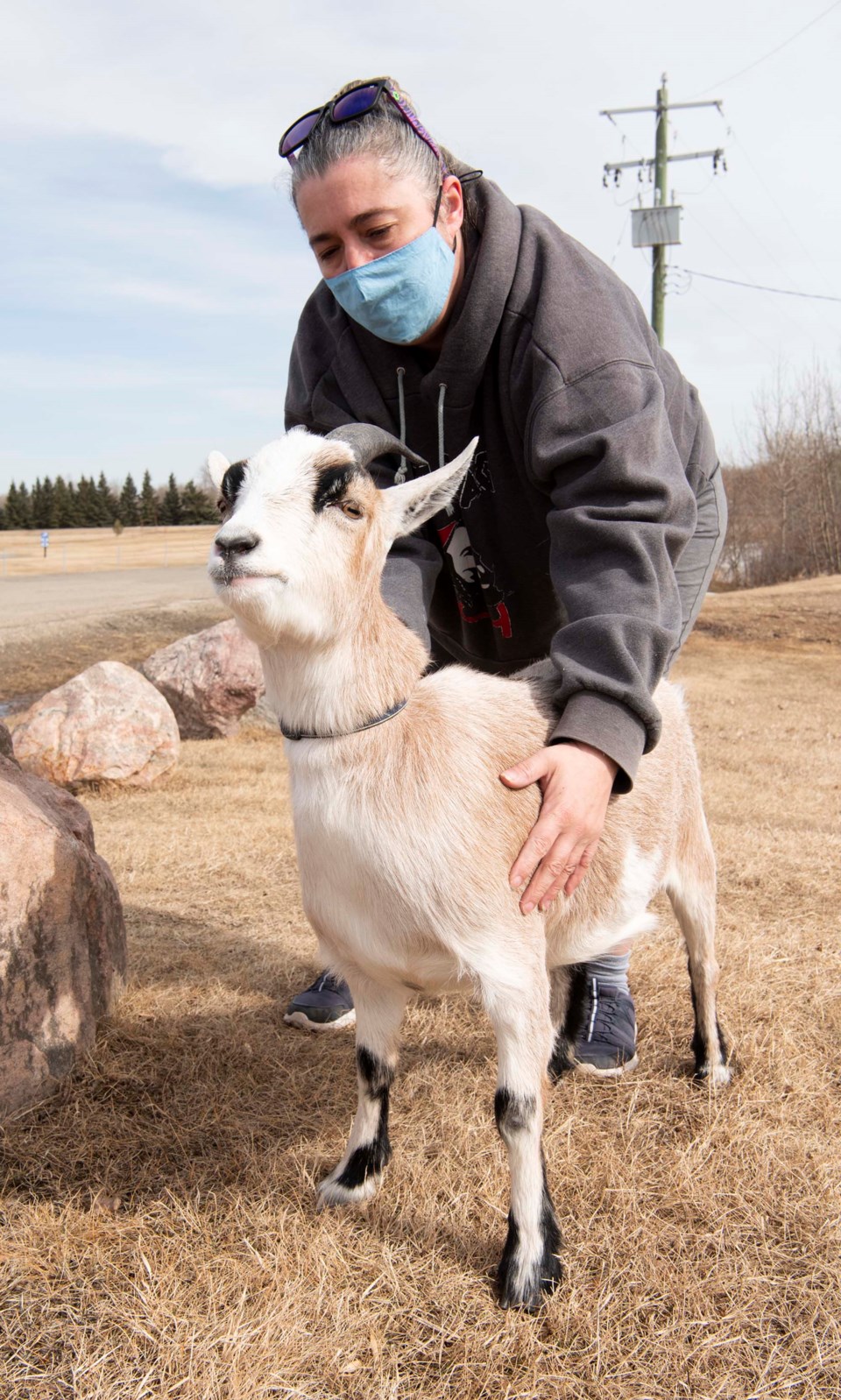 WHAT 'CHOO LOOKIN' AT? — Dill the Goat begrudgingly poses for a photo at the Cardiff Golf and Country Club April 1, 2021, alongside his owner Rebecca Vincent. Dill was one of the few known pet goats in the Sturgeon County region. KEVIN MA/St. Albert Gazette

Cardiff Park residents may have done a double-take in recent years at the sight of two humans taking a goat for a walk.

That was Dill the Goat and his associates Gary Larter and Rebecca Vincent of Alcomdale. The three first met about two years ago and have since been spotted throughout the Edmonton region.

The Gazette caught up with them this week at the Cardiff Golf and Country Club, where the trio were drawing numerous questions and incredulous looks from passing cars and pedestrians.

Vincent, Larter’s common-law partner, said she and Larter first got Dill two years ago in June on a whim.

“One day I just asked (Larter) ‘Can we get a goat?’” as a joke, Vincent explained, but to her surprise he said yes.

After a month or so of research, the couple got in touch with a farmer in Rimbey and took in Dill, who they named after the family cat, Pickle.

Dill is a Nigerian Dwarf goat that stands about knee-high and weighs 77 pounds, Vincent said. He has two small, black horns, black eyebrows, a white and sandy-brown coat, trim black hooves, and a sort of fur Mohawk along his spine that sticks up when he’s nervous (such as when approached by cars).

“He’s just like a dog, except quieter,” Larter said, adding that they often call him their “horned poodle.”

Vincent said she and Larter take Dill with them everywhere, especially to Cardiff Park, Rundle Park in Edmonton, and the Home Depot in St. Albert.

“He’s a big hit in the Walmart parking lot.”

On walks, Vincent said Dill tends to stick close to his owners, but will also bounce around and bleat at you like a turkey from across the field if he wants attention. He also plays fetch with a straw ball.

At home, Larter said Dill is kind of lazy (but house-trained), and monopolizes the couch when he isn’t in his pen.

“We never have to cut the front lawn whatsoever. We haven’t had a weed in two years.”

Sturgeon County’s Animal Control Bylaw allows residents who live in the Country Residential or Hamlet district on parcels bigger than one hectare to keep a certain number of goats on their property, county protective services manager Pat Mahoney said in an email – six, in the case of Alcomdale. They are otherwise prohibited in residential areas.

Bylaws ban goats as pets in residential areas of Bon Accord, Gibbons, Redwater, and St. Albert. Pet goats are allowed in Morinville with a unique animal permit.

While he wouldn’t recommend it himself, Russell Gammon of the Canadian Goat Society said some Canadians do keep goats as pets – typically the Nigerian Dwarf or Pygmy breeds due to their small size.

Gammon said goats are social animals, so you might want to keep at least two of them around for companionship. Keep males and females apart unless you want baby goats, and neuter any male goats, as they otherwise become very smelly.

Vincent said goats need plenty of space and attention, which they could provide Dill as Larter was usually at home. Owners should be wary of wood furniture and phone cords, which goats tend to gnaw, and guard against most houseplants, as many were poisonous to goats.

Gammon encouraged potential owners to do their research with veterinarians and goat breeders before adopting a pet goat. The Alberta Goat Association has a list of reputable breeders.

“I personally would not have a goat in the house,” he said.

Vincent said she and Larter had no plans to give up Dill and hoped to be with him for the rest of his 15-year life.

“My husband says all the time, ‘Everyone should own a goat.’”