A round of applause filled the air in council chambers Monday evening after St. Albert city councillors agreed to replace a bird-watching platform at Big Lake.
Jul 10, 2018 12:10 AM By: April Hudson 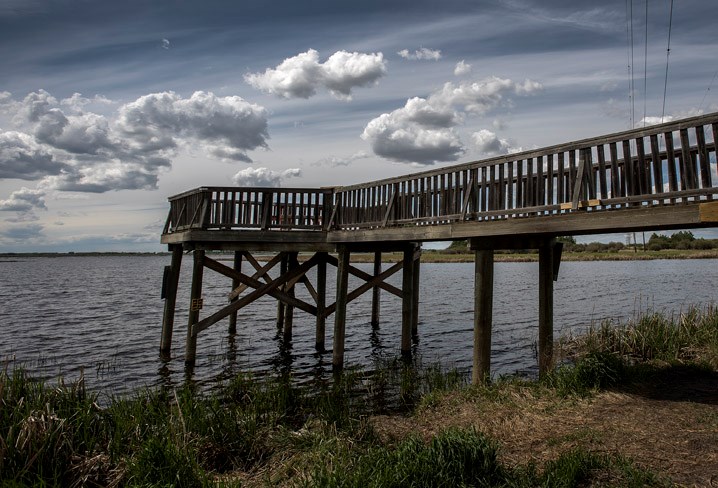 BLESS FIX – A photo of the BLESS platform in St. Albert that was closed for safety reasons in June 2017. City council has approved $342,000 to replace the platform.

A round of applause filled the air in council chambers Monday evening after St. Albert city councillors agreed to replace a bird-watching platform at Big Lake.

The city will spend approximately $342,900 to shore up the platform's unstable structure with screw-piles. That means the platform won't be shortened and will continue to stretch out into Big Lake.

"This was a great decision, and congratulations to council," said Al Henry, president of the Big Lake Environment Support Society (BLESS), which built the original platform in the mid-1990s. Henry and several other BLESS members were at city council to hear the decision.

The fix-up, which will also see parts of the platform itself repaired beyond the piles, should be completed by February 2020 and the city estimates it will add 10 years to the lifespan of the platform, although Henry and councillors felt it would extend beyond that.

The platform cost BLESS $12,500 to build in about 1996. It was turned over to the city for a dollar. The city shut it down last June 2017 after an inspection found it was structurally unsound and city councillors have been weighing their options since December.

With Coun. Wes Brodhead putting forward the motion for screw-piles – one of seven options – councillors ultimately landed on a fix that hit most of the points BLESS was looking for, although the society had asked in an April 5 letter to council for an option that doesn't intrude into Big Lake.

Regardless, Henry said Monday's decision was "more than acceptable."

Councillors, too, were relieved to finally put the issue to a vote. During debate, Coun. Sheena Hughes and Mayor Cathy Heron expressed appreciation to Brodhead for putting the motion on the floor.

Brodhead said he was gratified for council's support on his motion. He said his priority going into Monday's meeting was to have a decision made.

"I think the community has been waiting, and quite honestly, if we would have delayed it again last night, I'm not sure that would have been in the best interest of the community," he said.

"Costs are not going to change, administration went to great effort to come up with seven different options – it was incumbent on council last night to choose one."

He picked the option to repair the platform and its piles in part to mirror BLESS's original vision as closely as possible but also to preserve the experience of being out on the lake, which would have been lost with most of the other options.

"You're out there, and you look down – and you can see fish, you can see the water plants. It's just a different experience than standing on the shore," he told the Gazette following Monday's decision.

Councillors voted 5-2 in favour of Brodhead's motion on Monday, with Heron and Coun. Ken MacKay voting against it.

MacKay said he believes something needs to be done with the platform but felt it shouldn't be treated any differently than other capital projects and should thus go through a prioritization process.

He also felt the option was expensive for what could be a short-term fix.

"I think we should potentially just do it the proper way, which will actually add a significant lifetime onto this and that will make it a little easier for us when we speak to costs," he said.

Heron favoured an option that would have seen the platform pulled back out of the lake, which would have cost $64,700 less.

Following the vote, Heron said she is looking forward to hearing whether the city can cut costs. In particular, capital projects manager Meredith Willacy told council she has had conversations with 1 Combat Engineer Regiment about the platform, in relation to building a new structure.

1 Combat Engineer Regiment used to put in a temporary bridge for the children's festival and does community projects from time to time, but would need structural engineered drawings, Willacy said.

"They indicated it is something they would be interested (in) but they would need drawings," she said.

Henry said he thinks the community – particularly groups who use the platform – would be willing to help raise money to cover the cost.

"BLESS would support the city as best we could through fundraising," he said.

7: Remove platform and build a floating platform for $396,400 plus operating costs, with a lifespan of 12 years.