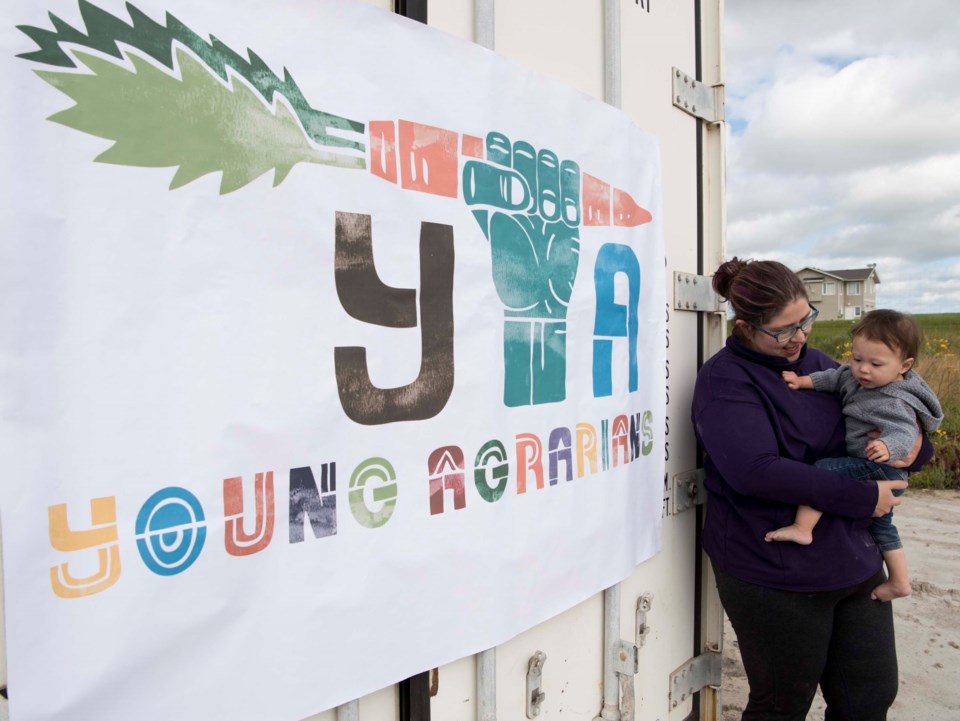 (VERY) YOUNG FARMERS — Bryanna Kumpula-Yung wrangles future farmer Adley Young Saturday at Rosy Farms near Alcomdale. The two new farmers were part of the 1st Generation Farmers Conference at the farm, which saw about 50 new farmers gather to learn tips on how to get their businesses off the ground.

Bryanna Kumpula-Yung wanted to get into farming after she graduated, but she had a big problem: cash.

“Going into farming is very expensive,” said the young Sturgeon County flower farmer, and she couldn’t afford the land.

So she got creative. Instead of spending millions on land and equipment, she started growing flowers in her backyard. Later, she teamed up with a Sturgeon County farmer who had some spare land and moved her garden there. Now, business at Bar OA Farms is booming, and she hopes to start farming full time next year.

“Oil and gas (jobs), you almost lose your soul,” Kumpula-Yung said, when asked why she wanted to farm.

“People want to get back into something they can feel good about.”

Kumpula-Yung was one of about 50 new farmers at Rosy Farms near Alcomdale Saturday for the inaugural 1st Generation Farmers Conference. Organized by Kumpula-Yung, Rosy Farms owner Andrew Rosychuk, and the Young Agrarians network, the conference was meant to give new farmers expert advice in how to start their own farms.

Statistics Canada reports that just nine per cent of Canada’s farmers are under 35. As more and more farmers approach retirement – the average age is 55, up from 47.5 in 1991 – many groups are seeking ways to recruit new farmers to keep farmland in operation.

About 68 per cent of Canada’s new farmers did not grow up on a farm, said Rosychuk, citing information from a 2018 study by Lakehead University. Many of them spent years working government or industry jobs before deciding that wasn’t the life they wanted.

“New farmers, the No. 1 reason they want to get into farming is they want the lifestyle,” Rosychuk said.

And most of them want a different approach to farming, said Dana Penrice of the Young Agrarians, a national network that aims to support new farmers. Instead of giant export-orientated conventional farms (which most can’t afford), today’s new farmers favour micro-scale ones that grow food for local sales at farmers’ markets.

“They want to be part of mitigating climate change or restoring our environment,” she said, and to create businesses that serve their communities.

While he grew up on a conventional chicken farm, conference speaker Ryan Mason of Reclaim Organics said he initially worked as an educator when he graduated. Travelling the world in that job and seeing all the different ways people outside of Canada grew food convinced him to head back to the farm.

“I realized I wanted to contribute to the food system in a different way.”

Mason said he started six years ago growing vegetables in backyards and empty lots in Edmonton, emphasizing organic agriculture, energy conservation, and other principles of sustainable agriculture. After four years, business was good enough for him to move his operation to the family farm near Pigeon Lake, where he now farms six acres.

Land and capital costs are the biggest obstacles faced by most new farmers, said conference attendees.

“A quarter section of land, which is 160 acres, in central Alberta is going for about $650,000,” said Jason Stuka, who has farmed near Camrose for three years. You can move away from the cities for lower prices, but that costs you your market access.

One solution is apprenticeships. There are many old farmers out there who have plenty of land but no one to pass it onto when they retire, Rosychuk said. Groups like the Young Agrarians are working to pair these old farmers with new ones as mentors so they can pass on their land through rent-to-own agreements.

It takes time to grow a farm business, and you won’t always grow a winning crop, Kumpula-Yung said. Still, she said life as a farmer has been great for her blood pressure and has given her daughter Adley a chance to grow up digging up potatoes and playing in the dirt.

“For our family, it’s having that connection back to the land.”

Rosychuk said he hoped to hold this conference again next year.