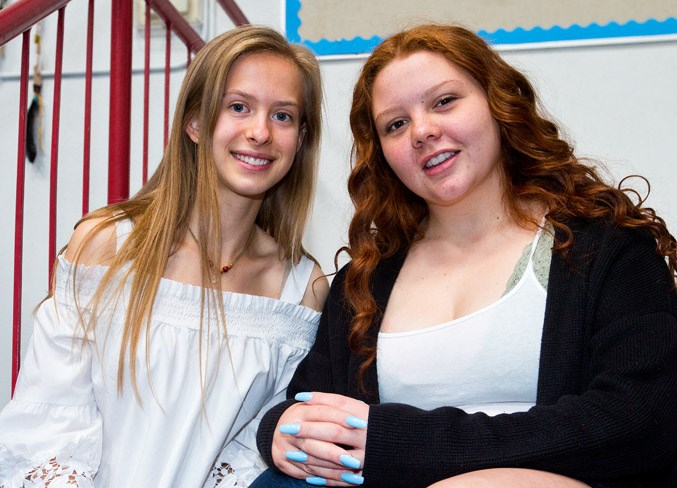 WALK FOR WOMEN – Paul Kane Grade 11 students Anwyn Neraasen, left, and Hannah Nash are organizing St. Albert's inaugural Missing and Murdered Indigenous Women Walk next weekend as part of St. Albert's National Indigenous Peoples Day celebrations. The walk is meant to make people more aware of the systemic issues in Canada that have lead to at least 1,200 Indigenous women being murdered or going missing between 1980 and 2012.

People would take notice if everyone at Paul Kane turned up missing or dead.

Yet when some 1,200 Indigenous women go missing or get murdered in Canada, no one seems to care, said Paul Kane student Hannah Nash. That’s more people than there are students at her school.

“If every student went missing in my school, would it still be looked past? Would we still forget about it?” Nash asked.

Nash is a Grade 11 Métis student and a member of the St. Albert Public board’s First Nations, Métis and Inuit wisdom and guidance committee. She’s holding an awareness walk in Lions Park on June 24 to draw attention to Canada’s epidemic of missing and murdered Indigenous women as part of St. Albert’s National Indigenous Peoples Day celebration.

Canadians will celebrate First Nation, Métis, and Inuit culture this June 21 as part of National Indigenous Peoples Day. While St. Albert schools will hold their celebrations Thursday, the official free citywide celebration and the associated awareness walk will happen the following Sunday.

While Indigenous Peoples Day is about celebrating culture, the issue of missing and murdered Indigenous women isn’t one we can ignore, said Gwen Crouse, president of the St. Albert National Aboriginal Day Society, which has teamed up with Nash to hold the awareness walk.

“We highlight a lot of positives with Indigenous Day,” she said, but we also have to address the negatives.

Indigenous women are about 12 times more likely to be murdered or to go missing than non-Indigenous ones in Canada, according to the interim report of the National Inquiry into Missing and Murdered Indigenous Women and Girls. The RCMP estimate that at least 1,200 Canadian Indigenous women went missing or were murdered between 1980 and 2012, which inquiry panel said was likely an underestimate.

A big reason for all this violence against women is Canada’s historic treatment of Indigenous peoples, said Nash – a conclusion also reached by the inquiry panel. The panel found that institutionalized racism in the form of the Indian Act, residential schools, and the Sixties Scoop contributed to Indigenous communities’ loss of traditional knowledge, intergenerational trauma, poverty, and violence.

Nash said she hoped the walk would encourage people to learn more about Canada’s missing and murdered Indigenous women so that the federal government would take the problem seriously.

“Justin Trudeau just doesn’t find (this issue) a priority in his books. If we make it a priority for him, he’ll have it as a priority.”

St. Albert's inaugural missing and murdered Indigenous women awareness walk will start at 11 a.m. on June 24 in Lions Park. Participants – of which Nash hoped to muster a hundred – will walk to the St. Albert Healing Garden and back by noon for the start of the Indigenous Peoples Day celebration.

This year’s celebration will include Indigenous food and crafts, Inuit youth games, Métis fiddling and jigging, and First Nations drumming and dancing, Crouse said. Staff from the St. Albert Public Library will also be there to do some Indigenous storytelling.

Nash said she’s been going to National Indigenous Peoples Day events for as long as she can remember, and looks forward to it every year.

“It’s my favourite day of the year (even) over Christmas,” she said.

“The music is amazing, the dancing so beautiful, and the bannock is really good.”