3A women's basketball provincials on hold for Sturgeon Spirits 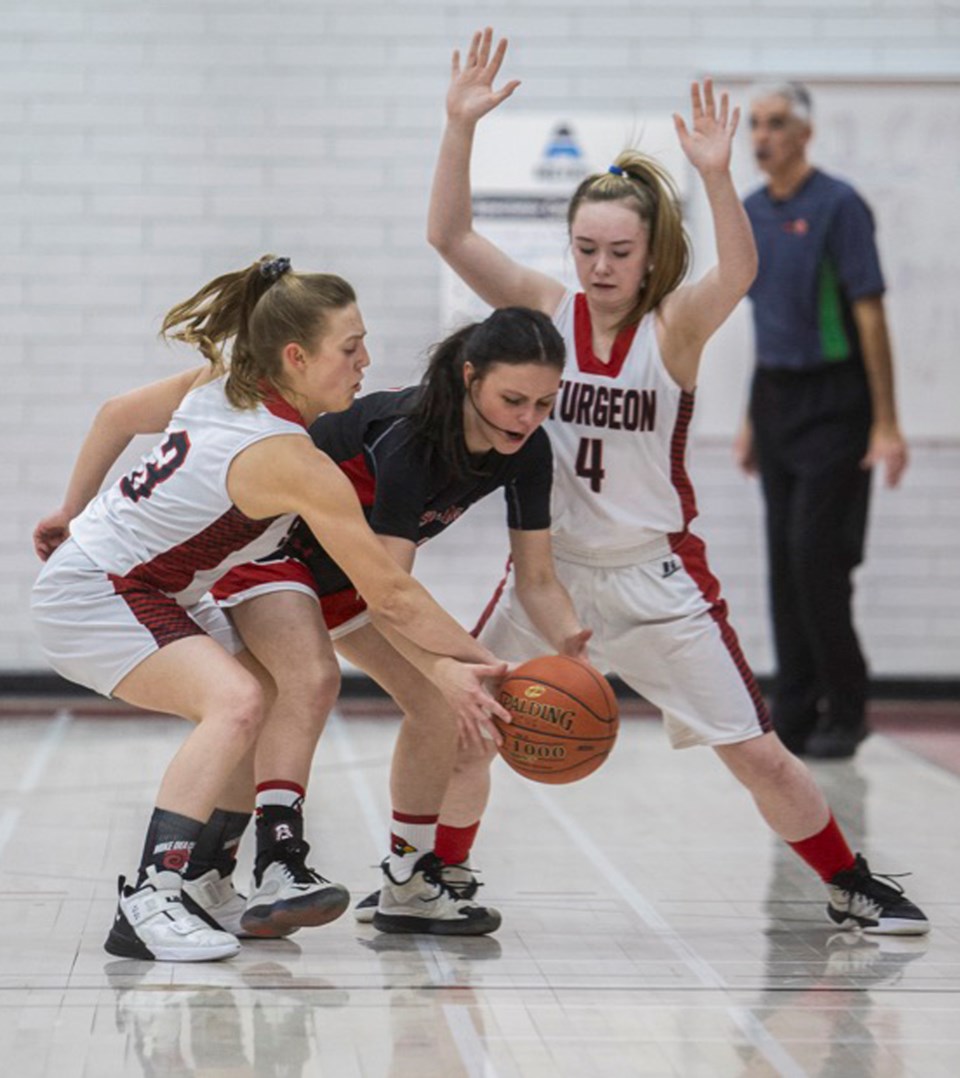 DOUBLE TEAMED – Sadie Sullivan, left, and Cheyenne Brown of the Sturgeon Spirits close in on Heather Rolinger (4) of the St. Andre Bessette Cardinals of Fort Saskatchewan in last week's metro Edmonton 3A provincial women's basketball qualifier at Sturgeon Composite High School. Sturgeon was scheduled to host the 12-team 3A provincials this week before the Alberta Schools' Athletic Association announced Thursday the postponements of its basketball provincial tournaments because of CONVID-19 concerns. CHRIS COLBOURNE/St. Albert Gazette

The biggest sporting event the Sturgeon Spirits have ever attempted to host will have to wait.

The 3A provincial women’s basketball championship was to tip off Thursday morning at the Namao high school before the Alberta Schools’ Athletic Association announced March 12 future ASAA championships and events are postponed or cancelled depending on the advice of the Alberta Health Services and any government agency related directives such as Alberta Education because of the COVID-19 pandemic.

On March 13, Metro Athletics also suspended all sports and activities in the metro Edmonton high school league until April 5 over concerns surrounding the coronavirus and March 15 the province cancelled all school classes in the province until further notice.

“For us, nothing is cancelled. It’s been postponed and there is still hope,” said Kerri Meadows, athletic director at Sturgeon Composite High School and head coach of the Spirits. “Obviously, the change with schools being cancelled now you just never know, but we’re really hopefully that we still get a crack at hosting and when the ASAA makes the decision once hopefully this whole virus outbreak has kind of, I use the term flattened, that we still get that chance.”

Sturgeon has been planning for provincials for the past 10 months and the 12-team tournament was to showcase the extensive modernization of the school and its impressive main gymnasium.

“Our school has actually never hosted a provincial tournament at any level in any league and in any sport. This was going to be the first one for us so there is a big learning curve with hosting provincials for us. A lot of schools that have hosted, they do it every three or four years so it’s easy for them,” Meadows said. “As soon as we knew we got the bid it was like, OK, this is the plan, this is what we want to do and this is what we want to achieve. If we’re going to do this we’re going to do it right. We want to host the best 3A provincial women’s basketball tournament we could possibly host. We weren’t going to do the minimum so between my committees and my co-chairs we’re talking hundreds of hours of planning.”

Meadows was discouraged by the sudden turn of events.

“When the announcement was first made my heart instantly went to my Grade 12s. They were there when we went to provincials for the first time in school history (in 2018) and the hope is they get to do that all three years and showcase their skills,” Meadows said. “As a former college assistant coach, most people forget provincial tournaments are where a lot of recruiting happens and a lot of scouting where you find those diamonds in the rough. Often it's underlooked how important these provincial tournaments are for kids to get scholarship dollars and get seen and get spots on rosters and find schools that can allow them to continue with their passion so my heart went to the Grade 12s, not just on my team, but everywhere.”

The ASAA decision also affected the 31-1 St. Albert Skyhawks, the defending 4A provincial women’s champions and clear-cut favorites to repeat this week at the 16-team tournament in Lethbridge, and the Morinville Wolves, ranked No. 1 in the men’s and women’s North Central zone 3A provincial qualifiers that were cancelled last weekend.

Meadows deliver the disappointing news to his players the day after the 75-73 loss to the Strathcona Christian Academy Eagles of Sherwood Park in the March 11 semifinal in the metro Edmonton 3A provincial qualifier tournament.

In the last 3A rankings before provincials, the Eagles were slotted ninth and Sturgeon was an honourable mention.

“As a coach, and not just as an organizer, you work so hard all year and basketball is one of the longest seasons in any sport and you want those kids to be able to feel like they were able to accomplish everything and give their all. I know when I notified my team at our practice Thursday night that it had been postponed, instantly they said, ‘I can't believe that was going to be my last game.’ They were upset with how the Wednesday night game finished and they were all under the assumption they were going to get another chance at redemption and that’s just how we played our season in knowing that we got to host and everything we did was for the big picture and not the little things. We had a small roster and we wanted to develop everyone and give them all the chances in the world and knowing that would've been our last game we might have done some things differently so I feel for these kids.”

With four Grade 12s on the roster – Maddie Campbell, Taylor McGrath, Haylee Sidor and Caitlyn Sullivan – Sturgeon placed seventh in division two at 5-6, lost the quarter-final to the Eagles 71-69 and in the 3A zone tournament defeated the division four St. Andre Bessette Cardinals of Fort Saskatchewan 72-67 before falling short again to the Eagles, the eventual second-place finishers.

“We spent all year developing the kids we needed to for the roles we need to fulfil in provincials. Provincials were our goal and everything else came secondary. When you’re hosting a tournament like that you want to have your best foot forward. You’re not just going to be there, you’re going to win and we’ve done the right things, we’ve put in the right systems and we’ve developed the right skills I think to be successful,” Meadows said. For my kids, I still hold out hope that we’ll get a chance at this provincial tournament.”

Sidor was recognized as a Metro Athletics All-Star and in her Grade 12 season was the first Sturgeon women’s player to surpass 1,000 career points. Sidor was sitting at 989 prior to the quarter-final against the Eagles and in the loss piled up 36 for the mark of distinction.

Last week in the zone tournament, Sidor drained 19 points against the Cardinals and 25 against the Eagles for a season average of 21.7 points and 10.9 rebounds per game. 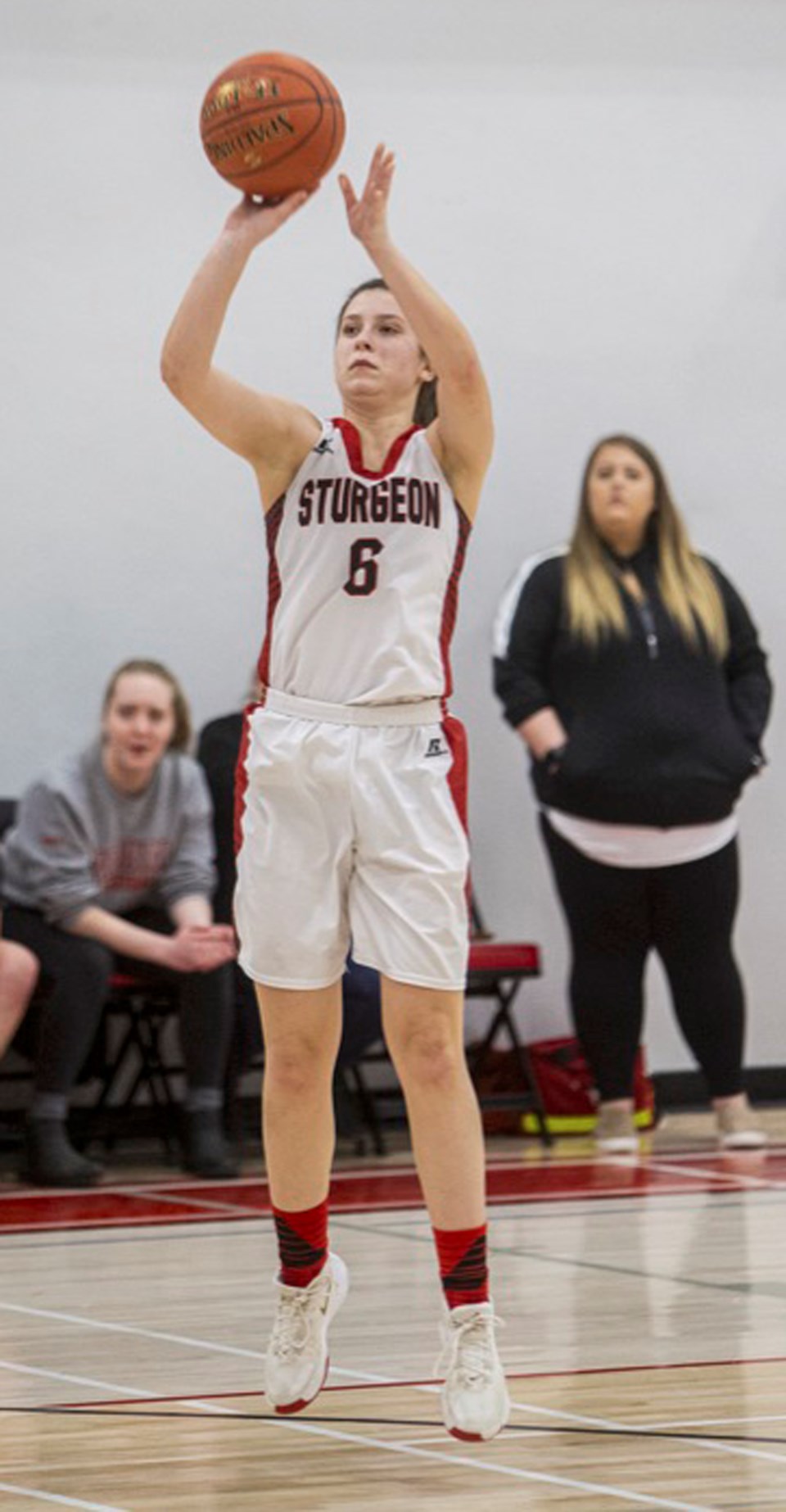 SHOT MAKER – Haylee Sidor shoots the ball for the Sturgeon Spirits, the host team for the 3A provincials that was postponed this week as the Alberta Schools' Athletic Association put on hold its championships and events over the COVID-19 pandemic. Sidor, a Metro Athletics All-Star, is the first Sturgeon women's basketball player to score more than 1,000 career points. She averaged 21.7 points and 10.9 rebounds in her Grade 12 season.CHRIS COLBOURNE/St. Albert Gazette