Two U18 teams representing the northern and southern sections of the province came together for their one and only game this season.
Jul 20, 2021 9:15 AM By: Preston Hodgkinson 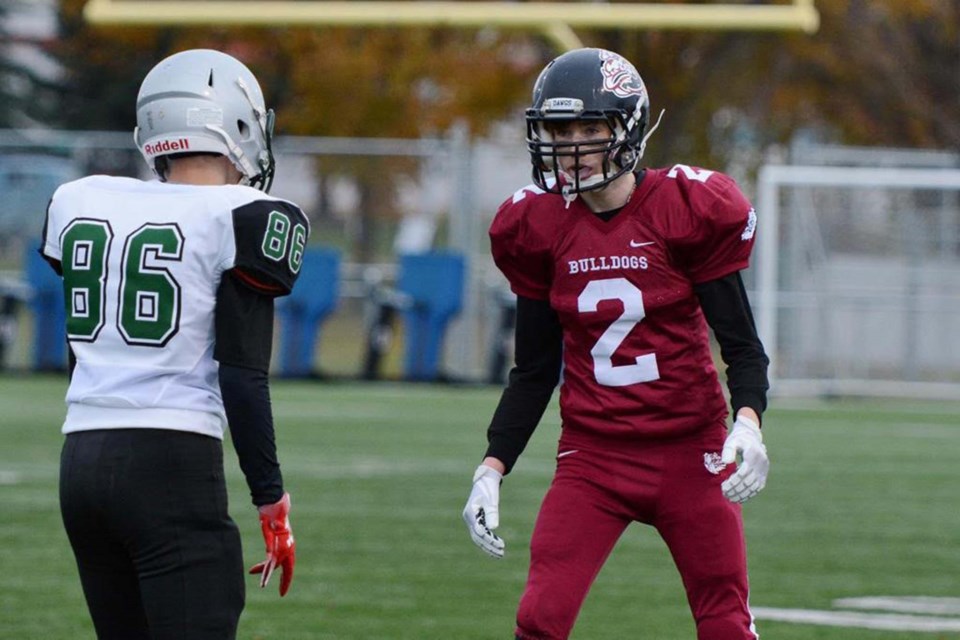 Ethan Maki (#2) of the U18 Alberta North team lines up against an opponent on the U18 Alberta South team at Great Chief Park in Red Deer on Sunday, July 18, 2021. JASON LAFFERTY/Photo

St. Albert schools were well represented at the 2021 football summer series on Sunday. A total of three players from St. Albert were selected to play for the U18 Alberta North team.

Receiver Ethan Maki from Bellerose Composite was joined by Willam Cooke and Brady Mah from Paul Kane to take part in their single North versus South game at Great Chief Park in Red Deer over the weekend.

In a regular year this team would be competing for a national championship, but due to the pandemic, that wasn’t possible. Instead, Football Alberta set out to create two U18 provincial teams to represent the northern and southern sections of the province. These two teams came together for their one and only game this past weekend.

Jason Lafferty, head coach of the Bellerose Bulldogs, said he isn’t surprised Maki was selected for the team.

“He’s a big body receiver who has got some pretty good speed to him,” said Lafferty. “I wasn’t surprised that he was selected. I think he has the body type that fits well for that level of competition.

“As a program we are really proud of this opportunity that he has created for himself and the position he has put himself in to compete. Our coaching staff and our city will be well represented with him.”

It was a nice surprise for Maki when he heard the news. It has been a long year since he took the field in a normal game.

“It feels great. It’s a great opportunity, and it’s a great way to interact with players from other teams,” said Maki. “Just getting to play the game again, I’ve missed it. It’s been over a year since I’ve had a real game and I’m super excited for it.

“Coach Lafferty’s advice was, 'Just be yourself, play the game, remember the plays, don’t drop the ball, and have confidence in your hands.'”

There was also a sense of pride to be the sole representative from Bellerose. Training has been difficult for Bellerose players, as they have had to move to an online platform. Maki said that while he was excited to represent his school, it highlighted some difficulties the pandemic caused.

“It feels good, but it shows what hurdles Bellerose has to get over to excel this coming season,” said Maki. “Bellerose has had online workouts with Calvin McCarty for about four months and we’re just starting to transition to in-person workouts with him.”

The U18 North and South game was a barn-burner. It came down to the final minute. The U18 South team squeaked out a 24-23 win over the North.