Best of the best at Reid tournament 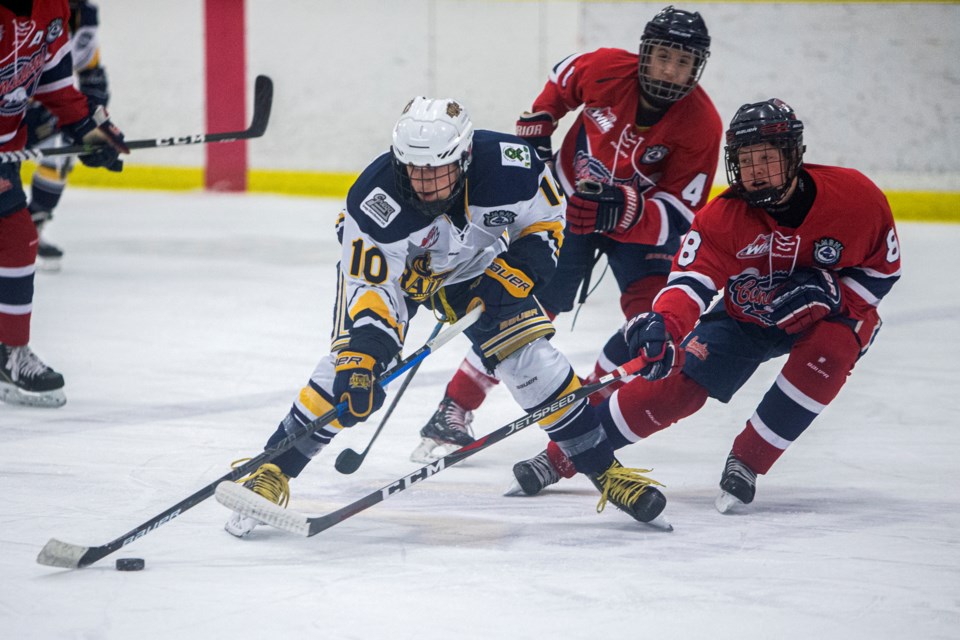 The stars of tomorrow shine bright at the John Reid Memorial Tournament.

The alumni list from the last 41 years of the heavily scouted bantam AAA tournament includes 141 who have played in the National Hockey League.

“It’s pretty amazing, the talent at this tournament over the years,” said Cam Wietzel, the team selection co-ordinator for the Reid tournament.

The latest player to see NHL action is Michael Rasmussen with the Detroit Red Wings.

“He played in this tournament in 2014, which wasn’t that long ago,” Wietzel said of the product of the Okanagan Hockey Academy of Penticton.

The first European team at the tournament, HC Kometa Brno of the Czech Republic in 2014, also had graduates with its country's world junior team.

“It’s kind of a different aspect to the tournament. It’s more than just one country. You watch some of the U.S. kids and it’s kind of interesting to see them work their way up. Nolan Foote of Colorado (Thunderbirds in 2015) was here at the tournament and he was on Team Canada,” Wietzel said of the international connection.

This year’s competition highlights the top players born in 2005 and 2006 on 16 teams in the western North America.

“We’ve got all the top 10 scorers in the academy league, the CSSHL, so there is going to be a lot of talent, but I don’t think there is a standout per se like (Matthew) Savoie two years ago and (Conor) Bedard last year, who were both underages, but there is a lot of unbelievable good hockey players,” Wietzel said. “It’s a pretty balanced group this year. It’s a deep bunch of players."

One prospect to keep an eye on is Lukas Dragicevic of Delta Wild Academy Green.

“It’s a lot more balanced this year. There are no clear-cut favourites. Obviously the academy teams, we’ve got (the top three teams) in that league in the tournament, they’re very strong, but among them they’ve been splitting tournaments all year. There hasn’t been one team that’s dominated the tournaments,” Wietzel said. “We also have in my mind the top seven teams out of the Alberta Major Bantam Hockey League and again it's pretty balanced. St. Albert is having a really strong year and it’s a tough league.

“It will be interesting this year.”

The mandate of the eight-person tournament committee is to showcase an elite group of bantam AAA teams.

“We try to definitely select strictly on merit and how teams have performed, but we are making our selections in October and November and these are 14-year-old boys so teams change as the year goes on,” said Wietzel, an 11-year committee member. “But we're very happy with the teams we’ve got this year.”

The four-day tournament at Servus Credit Union Place also brings the community together during 42 games of premier calibre hockey.

“We see people who volunteer for this tournament, whether it’s helping out with admissions or working as off-ice officials or helping with the player evaluations, and their kids have gone through the process and they’re not really following minor hockey that much, but they always seem to come back for this weekend and it’s amazing to see all the same faces. Their kids haven’t played minor hockey in 10 or 15 years and they still come out to watch or to volunteer so that’s probably the legacy of the event,” Wietzel said. “In terms of the community, the school program that Trudy (Kueber) organizers on Thursday, there is probably going to be 1,300 students from elementary schools showing up at the arena, which makes for a lot of excitement, and for some of these kids it's one of their first exposures to hockey at a fairly high level.”

The Hockey Hooky event at 10:45 a.m. Thursday between the Sabres and Prairie Storm at Go Auto Arena will be packed with students cheering on the home team.

The Sabres also play at 8 p.m. Thursday against Los Angeles in the Teddy Bear Toss game at Go Auto Arena in support of the St. Albert Food Bank. Fans are asked to bring a teddy bear wrapped in a plastic bag to throw on the ice after the Sabres’ first goal.

Approximately 600 students are expected to attend the 1:30 p.m. game against St. George’s at Go Auto Arena as the Sabres wrap up pool play before the playoffs in the A, B and C brackets.

With four returnees on the roster, the Sabres are one point back of first-place Red Deer in the overall AMBHL standings and the team’s third win in a row and 10th in 12 games was 4-1 against the Canadian Athletic Club (4-16-5) Sunday at Jarome Iginla Arena.

The Sabres have seven games remaining before the playoffs and the next game is Jan. 26 against the Calgary Northstars (5-11-6) at 10:45 a.m. at Jarome Iginla Arena.