Now she is leaving the youth league, and headed for adult league, and university.
Jun 26, 2021 3:45 PM By: Preston Hodgkinson 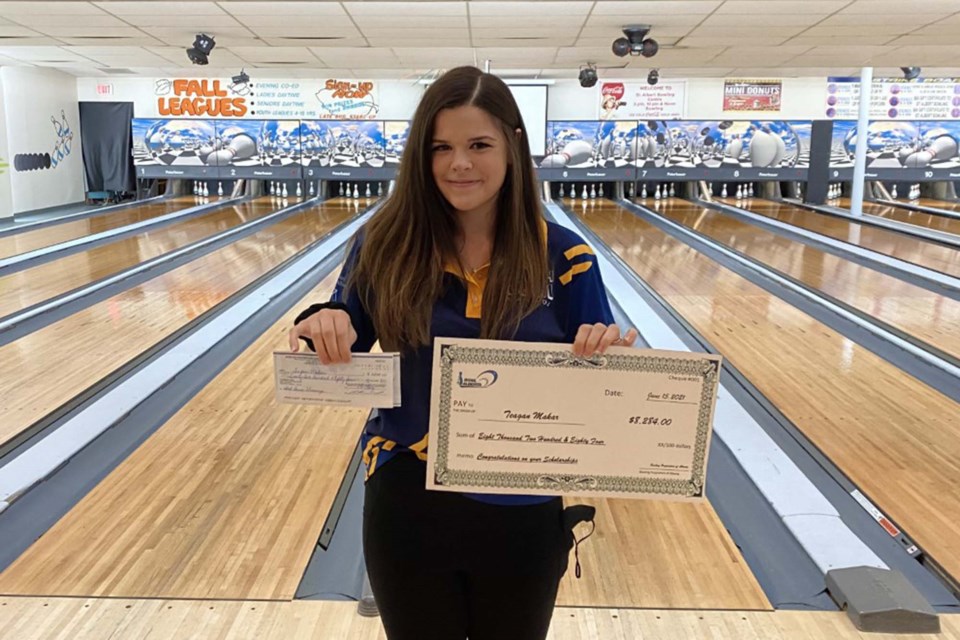 A member of the St. Albert Bowling Club has been awarded with more than $8,000 in scholarship money from her competitive bowling pursuits.

It is quite the accomplishment for Teagan Makar, and an unexpected one.

Bowling isn’t often thought of as a sport that can yield the type of money Makar was awarded at the St. Albert Bowling Centre last week.

“It feels really amazing, I didn’t realize I accumulated so much (money) over the years,” said Makar.

The money she was awarded wasn’t a part of a program or application process. It was the total Makar had won over the course of her young bowling career. It accumulated over the years she spent in the sport. Now that she is leaving the youth league, she is able to claim it all at once.

Martin Vankeimpema, a former president of Bowl Alberta, was on-hand to explain how the bowling scholarships work.

The funds must be spent on her future tuition, books, or equipment for her education.

Alongside her for this monumental day was her long-time coach, Ernie McLellan, the man responsible for introducing her to competitive bowling in the first place. As Makar said, it was a bit of luck and chance the two even crossed paths.

“I was bowling with my family just for fun and Ernie noticed me and he got me involved in the program in Callingwood,” said Makar. “My love of bowling comes from him, he taught me everything I know he’s been there from day one.”

Makar first got her start with the Callingwood Bowling Club in 2008 when she was seven years old. She came to the St. Albert club after Callingwood shut down in 2012.

McLellan spoke fondly about Makar and was bursting with pride as he saw her accept the award.

Richard LaPerle, assistant manager and co-owner of the St. Albert Bowling Centre, praised Makar, and said he hopes her story inspires a new generation of bowlers in the community.

“It is truly amazing and it couldn’t come to a better person. She has been so dedicated and committed to her sport and craft that it is great to see her get rewarded for that,” said LaPerle. “I hope it inspires other kids that are involved in bowling to put that extra effort into their practicing to get these lofty goals or maybe even some kids that were on the fence of trying bowling.”

As for Makar’s immediate future, she will be attending the University of Alberta to study kinesiology. Don’t think for a second that means she’s hanging up the bowling shoes, as she said she is excited to enter adult leagues.

“From here I’m out of my youth group now, so I am going to move into the adult league and I am hoping to get a good start when things go back to normal so I can start making my stamp there, too,” said Makar.

No matter where she goes, the St. Albert community should keep their eyes peeled to see where this bowler strikes next.