Buzzards of a feather flock – and win – together 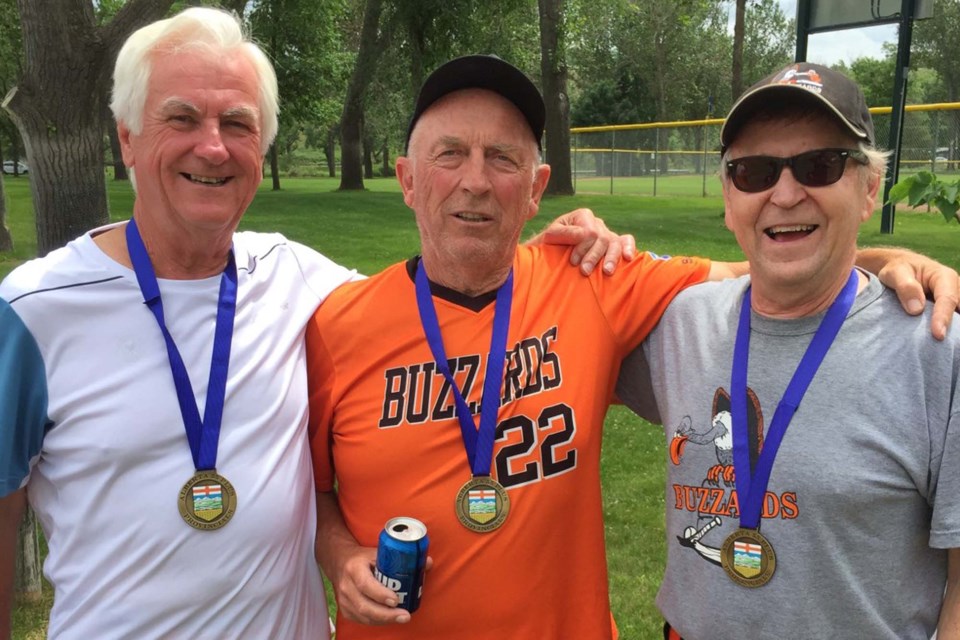 Buzzards' manager Erv Krawchuk, left, catcher Rod Gaus and pitcher Brian 'Buck' Kupsch are in a celebratory mood after their team's gold medal win in the men's 70-plus category at the Alberta 55 Plus Summer Games.

When the St. Albert Buzzards trounced the competition to take gold in the men’s 70-plus division at the Alberta 55 Plus Summer Games in Medicine Hat, it wasn’t just a display of athletic prowess and strategic play, it was more like a family that really knows how to play well together.

“We've been together as a team for more than 20 years. We've had a lot of success over the years,” said Erv Krawchuk, the manager of the winning septuagenarian slo-pitch team.

“We get along really well. We are very good friends. We don't pick on each other like some other teams will do if somebody makes a bad play. We just know the player that made the bad play feels worse about it than the rest of us. ‘Just get the next ball…’ that's been our attitude. We’re very good at picking each other up.”

“We're so close. We're like a family. We just always pull for one another. I think that's why we do so well. Honestly, I think it makes a big part when you're so close that you want to do so well,” added shortstop and tournament MVP Richard Perreault.

Of course, part of the team is his actual family. Richard's brother Chester Perreault is on the team too. Chester’s the younger one, having just turned 70. Richard is 71.

Together, they’ve been playing for two decades and refining their skills and plans of attack accordingly. The team is well known for making big gains by turning double plays. It’s almost their defining characteristic.

“We turn more double plays than any other team, not only in our league but in most of the tournaments that we go to including in the U.S. It's just because we've been together so long. We know how we're going to play,” Krawchuk noted.

Indeed, there's a lot to be said for the value of experience and working as a team. The Buzzards are also well known for championship play year after year. Two years ago, they played in the 65-plus division and took gold then too.

In this year’s Summer Games, they won their first game with a score of 17-9 and took the second game 12-0, which only lasted five innings before they called it.

In the final against the Edmonton Cubs, the Buzzards showed them who’s boss with a score of 26-10. No mercy there.

“In total in the five games, we outscored our opposition 88-32, including beating Edmonton in the final 26-10,” Krawchuk said.

“The competition was really, really good. It's funny. We get hot sometimes and we just get on a roll. That's just what seemed to happen. We started off slowly with the first game and we just got on a roll and played really, really well defensive-wise. We turned a lot of double plays, which in that age bracket doesn't happen very often,” Perreault said.

Their success is nothing to sniff at when you also consider that the team played five games over the course of three days ending July 7 when Medicine Hat was experiencing 30C weather.

“It's a very big deal for us. We were very, very excited. It just means a lot,” Krawchuk added.

The Old Buzzards are back to their regular game schedule, taking on the Silverbacks on Diamond 2 tonight starting at 5 p.m.