North division came together to play some exhibition, crossover games in the face of league cancellation plans.
Jul 14, 2021 5:40 PM By: Preston Hodgkinson 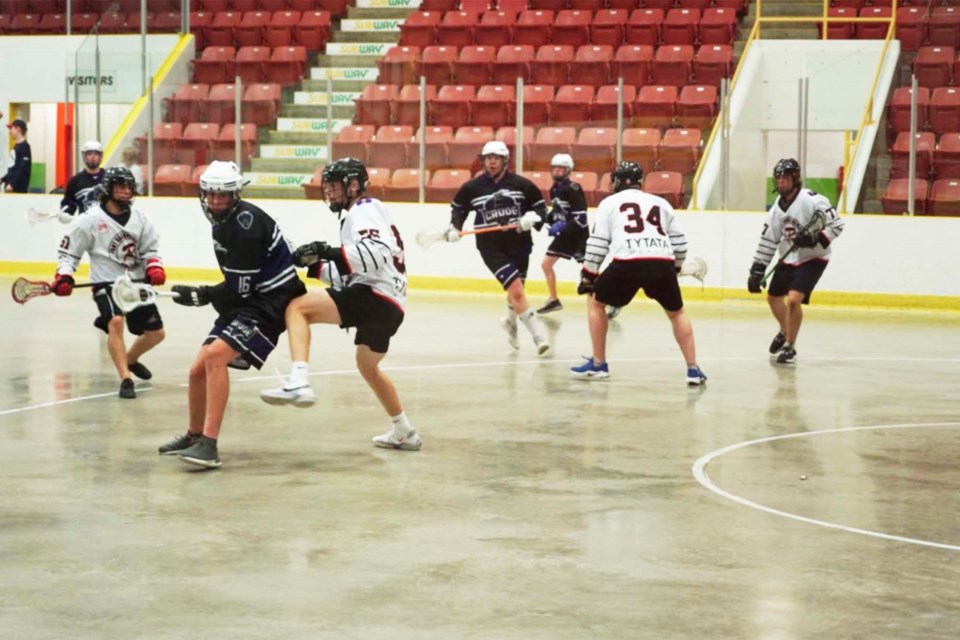 Hayden Hodges (#16) battles with a Fort Saskatchewan defender during an exhibition game at the Go Auto Arena on July 10, 2021. PRESTON HODGKINSON/St. Albert Gazette

Lacrosse season is underway in Sturgeon County. The Junior B St. Albert Crude tier one and two teams were busy this past week as they kicked off their exhibition schedule. It isn’t quite what the league is used to. A season in a regular year would have started at the end of April with the playoffs concluding in early August. This year will feature a string of exhibition games and some crossover games played within the Crude’s north division.

The fact that lacrosse is being played at all is fortunate. Hope was nearly dashed when the Rocky Mountain Lacrosse League (RMLL) announced the cancellation of the regular season back in May. Crude general manager Terry Dokken said these games are the result of the north division coming together to bring some normalcy back to the sport.

“At one point (the league) cancelled all lacrosse in Alberta, but then some RMLL executives said to us that if we wanted to do something that it would be totally up to us individually as teams and divisions,” said Dokken. “The Junior B tier one division decided that the north division was going to play some exhibition games and then have some crossover games just to get some games in.”

Those crossover games will begin on July 20, but before those can happen they have to play out their exhibition schedule. The tier one Crude saw their share of ups and downs early on. They currently sit at a 2-2 record through four games with a 20-9 win over the Sherwood Park Outlaws and a 17-11 win against the Edmonton Warriors.

Their losses were not lopsided, either, as they dropped 11-10 and 9-7 decisions in a pair of losses to the Fort Saskatchewan Rebels, the latter of which took place this past Saturday at the Go Auto Arena at Servus Place.

A difference of five goals could have the Crude off to a perfect 4-0 start, but such is the way of sports. Dokken said the team has performed spectacularly in spite of an unusually short bench compared to a normal year.

“One of the things we are finding (this year) is that the commitment level is not there like it used to be,” said Dokken. “A lot of these guys were told that there wasn’t going to be any lacrosse, so they planned their life to go on vacations and things that wouldn’t normally happen in a regular season.”

“We got many, many guys that didn’t come back to play because, when the Alberts Lacrosse Association cancelled lacrosse, they thought it was done.”

This, of course, led to fewer players being actively available to play in their games. In the case of last Saturday’s 9-7 loss, Dokken thinks the team would have fared better if they had a full bench.

“If we had a full bench we’d have beat them (last Saturday),” said Dokken. “The young guys that we had playing did a marvelous job.”

The tier two team has faced a few growing pains to start off the season. They also have fewer players on their bench and they are a relatively young club that is still learning their way around the league.

“(The tier two team) is coming along. They’re kind of a work in progress,” said Dokken. “I think they are going in the right direction as far as a tier two team goes, considering it is only the second year we have had a tier two.

“We’re doing our best to build them up and have the two teams work together. It’s a good thing and it’s all working out very well.”

The tier two Crude currently sit with a 1-4 record through their first five games. Their lone win came in the form of a 14-2 victory over the Edmonton Warriors on July 8. They have lost twice to the Sherwood Park Titans in 18-6 and 9-6 scores, and then faced an 11-2 loss to the Lakeland Heat and an 8-3 loss to the Lloydminster Xtreme.