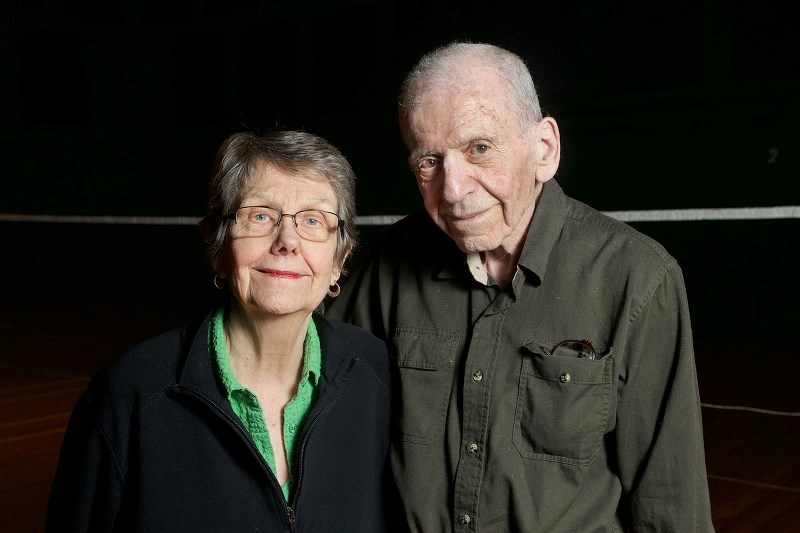 HALL OF FAME PIONEERS &#8211; Jean and David Folinsbee of St. Albert will enter the Alberta Sports Hall of Fame as winners of the Pioneer Award as builders and athletes in badminton. The Red Willow Badminton Club owners met on a badminton court in Calgary in 1949 and have been married for 58 years while devoting their lives to the sport they love.

A St. Albert couple’s devotion to the sport they love will be celebrated at the Alberta Sports Hall of Fame Class of 2015 induction ceremony May 29.

David and Jean Folinsbee, winners of the Pioneer Award as builders and athletes, have distinguished themselves as competitors, coaches and administrators in badminton at the provincial, national and international levels.

“It’s a thrill,” Jean said of the Hall of Fame honour. “We’ve achieved a lot but the fact that we were chosen together was really good. I’ve won awards and David has won awards but for us to do this together is pretty good because we’re pulling together.”

The Folinsbees were overcome with emotion over the announcement.

“It was just real joy and a surprise, a pleasant surprise. We were nominated last year and I thought that was it. I didn’t think we had another chance,” Jean said. “It’s starting to sink in now. I know our (three) children are very pleased with their mom and dad.”

“We built it from scratch,” Jean said. “It’s just total satisfaction to see that we’re doing something for families and for individuals.”

The Folinsbees have been a fixture in the sport after meeting on a badminton court in Calgary in 1949. Jean was born in South America and was 12 years old when her dad was transferred to Calgary and David arrived from eastern Canada.

“I married my coach so it’s been a lifelong kind of thing,” Jean said of the partnership that’s lasted 58 years.

David also coached Jamie Paulson to Canada’s only gold medal in badminton at the Commonwealth Games in 1970.

Jean said David was initially going to be a lawyer before his coaching stint in Montreal led him to the Glencoe Club.

“He just built the badminton up huge in Calgary when he arrived. His enthusiasm and energy built up one of the best programs in Canada way back then.”

Jean, 77, is a former Canadian national team member and national singles champion in all age divisions representing the Glencoe Club, beginning in 1953.

She also reached the quarter-finals of the All-England championships in 1955.

At the 2005 World Masters Games in Edmonton, Jean was awarded gold in singles and women’s doubles in the 65 to 69 age division while representing the Red Willow club.

The journey to Hall of Fame status is packed with memories to last a lifetime for the Folinsbees, proud grandparents of six grandkids and two great-grandkids.

“There is just a sense of satisfaction that we’ve chosen the right pathway in life,” Jean said. “We’ve made so many wonderful friends along the way. It’s been such a joy of being in a sport that you love and you’re good at and you know you’re making an impact in lives, particularly with the Red Willow club.”