Anderson, 18, will serve on the Texas university’s track team as a thrower, competing in javelin, shot put, discus and hammer throw, specializing in the latter.
Jul 10, 2020 12:00 PM By: Kevin Ma 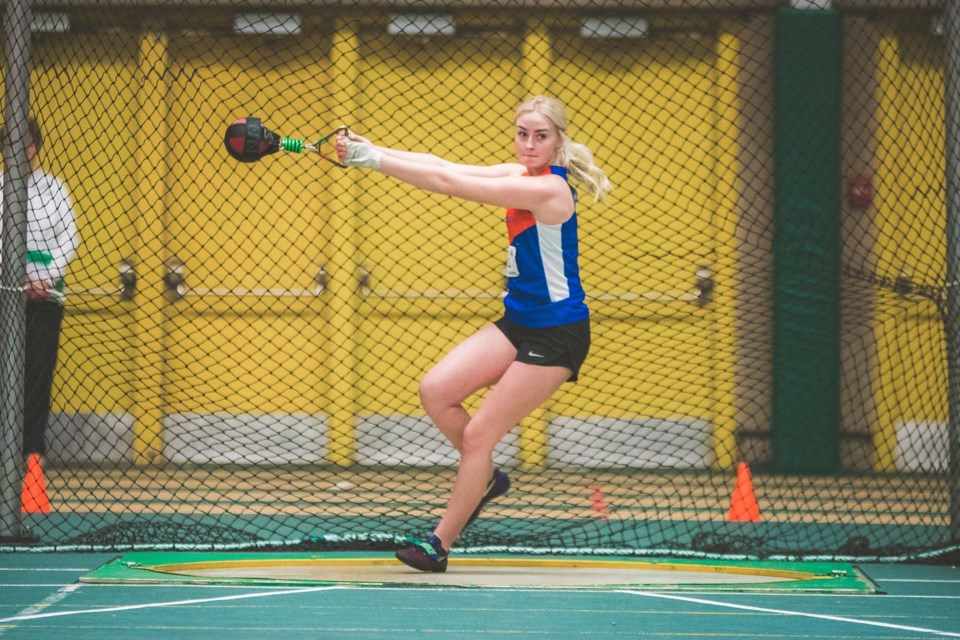 SHE HAS THE HAMMER – Paul Kane graduate Ilana Anderson has won a track and field scholarship to Midwestern State University in Texas. She will serve as the university's hammer thrower on the track team. She is shown here competing in the weight throw (the indoor version of the hammer) at the November 2019 Last Chance Track Meet. TIM OSBOURNE/Photo

A Paul Kane graduate has won a Texan scholarship in recognition of her skills at chucking spears, cannonballs and hammers.

Paul Kane graduate Ilana Anderson is off to Midwestern State University in Texas this August to study dental hygiene after winning a track and field scholarship.

Anderson, 18, will serve on the university’s track team as a thrower, competing in javelin, shot put, discus and hammer throw, specializing in the latter.

Anderson said she had been looking to strike out on her own after high school and was impressed by Midwestern’s athletics coach. She got the news about the scholarship two months ago and finalized the deal in late June.

“I was just so excited,” she said, when asked how she reacted to her scholarship win.

“She’s determined to do what she is doing,” she said.

Anderson said she started out as a runner in Grade 6 track but tried out the throwing events in junior high since no one else was doing them. Hurling heavy objects turned out to be more fun than running in circles, so she stuck with it, later joining the Paul Kane and St. Albert Mustangs track clubs and competing at the Alberta Summer and Tri-Provincial games.

Anderson said she’s been keeping up her practise indoors at the Butterdome during the winter and more recently at track facilities now that they’ve reopened. You need power, speed and strength for throwing, so she does a mix of sprinting, weightlifting and yoga to train.

Anderson said she could throw about 10 metres in the shot put, 25 in the discus, 30 in the javelin and 45 in the hammer.

“Javelin is tricky,” she said, as you have to release the javelin at the right angle so it sticks pointy-end into the ground – if it bounces or slides, your throw doesn’t count.

Shot put, discus and hammer all rely on the same basic hip and shoulder movements with some added oomph from centripetal motion, she continued. Her past training in dance helps keep her from getting dizzy, but she’s flung a few hammers in the safety netting before. One errant toss almost landed a hammer on her mom’s foot.

“It’s all in the feet and the shoulders,” Anderson said of a good toss.

“If you step wrong, you’re done for.”

Anderson said throwing is a sport where you could focus on perfecting your skills instead of competing with others. (You also get a great tan at the track, she added.) It’s a tight-knit, collegial community, as there aren’t many female throwers in Canada.

Anderson said it would be nice to have an almost-normal school year this fall in Texas, as Midwestern (unlike most Edmonton post-secondary schools) is still holding in-person classes. Classes will be half their regular size, though, and students will have to wear masks and undergo regular temperature checks for COVID-19. Post-graduation, she hopes to coach other youths in track to pass on her passion for the sport.

Anderson said the best part about throwing for her is that moment of release where you can see the hammer, shot, disc or javelin fly farther than you’ve ever sent it before.

“It’s like a relief to see all your hard work getting it out there.”

Anderson departs for Texas this August.